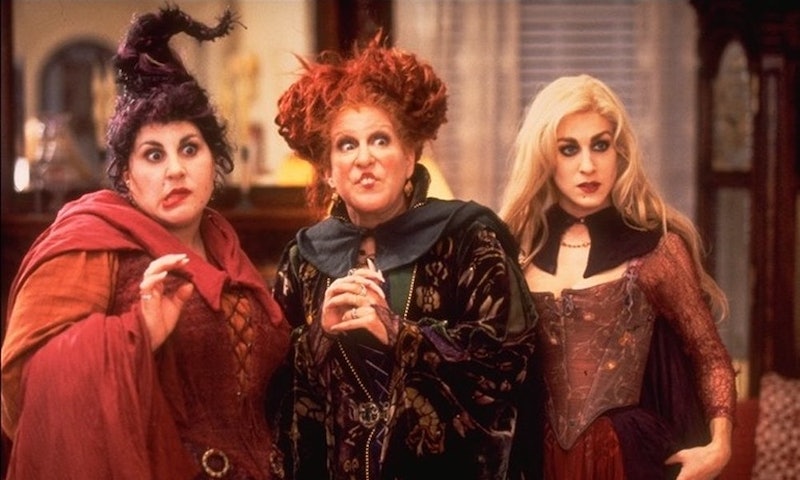 Much like the youth of the Sanderson sisters themselves, Hocus Pocus has proven to withstand the test of time. Now a cult classic, fans continue to pay homage to this Salem story year after year, either by dressing up as the iconic characters or watching the movie for the umpteenth time. But as enjoyable as the film is, there is one plot hole in Hocus Pocus that'll haunt you to the end of your days and make your nightmares run amuck, amuck, amuck.

The moment occurs fairly early on into the story, when Thackery Binx (still in human form) realizes that his sister Emily has been taken by the witches. He follows them into the woods and back to their cabin with the intention of saving his sister from harm. Of course, we know this doesn't exactly go as planned. Emily dies when Winifred, Sarah, and Mary Sanderson quite literally suck the youth out of her body and Binx gets turned into a cat, forced to live forever with the guilt of his failure. Sounds pretty scary, right? However, there's something even more terrifying that happens shortly thereafter that needs to be addressed once and for all, especially since no one ever seems to talk about it.

When the witches are hanged for their crimes by the Salem townsfolk, Binx's father asks for the sisters to tell him what they did to his son Thackery. This is when Winnie delivers that clever retort about how she has no idea because "cat's got my tongue." As his parents walk away, Binx (now in cat form) brushes up against his father's leg a few times before being shoved away. It's a point in the story, to be sure, but it's also very haunting. A father so close to his lost son but never realizing it. And this is where the plot hole comes in: Why didn't Binx speak to him? We know he could've, since he spoke to Max, Dani, and Allison 200 years later. This detail was never explained.

Did he have to relearn how to talk as a cat? Was speaking only something that developed over time? Or perhaps Winifred's spell prevented him from revealing his true identity to the people he loved. The truth is, we'll never know for sure. Binx never tells that part of the story, nor does anyone really ever question him about it, but why not? Sure, the dad would've freaked out at first to know that his son was now a talking cat, but surely that would be better than not ever knowing what became of him.

It's possible Binx figured his father — who clearly hates witchcraft — would want nothing more to do with him after such dark magic was performed on him and didn't want to risk being rejected by his own family. But what if that isn't how it would've played out? This was a huge decision Binx made, potentially on the assumption that his family wouldn't want him anymore and somehow it's always overlooked.

Binx's parents just lost their daughter and then had to grapple with the possibility that their son suffered an equally grim fate. They could've still been a family. Maybe not the type of family they'd expected, but one that could've made Binx's time on earth a lot more bearable and much less lonely. And the fact that viewers will never know why Binx didn't say anything will haunt us forever.