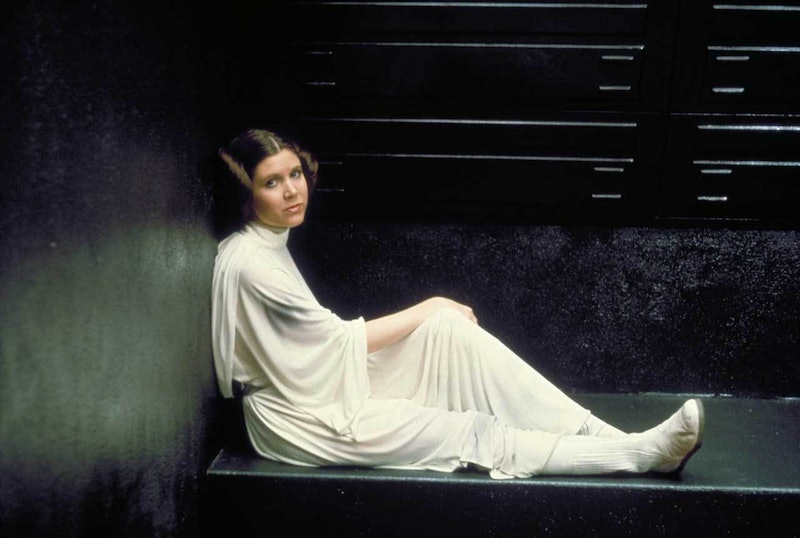 After suffering a heart attack on a plane from London to Los Angeles, Carrie Fisher has passed away, her daughter confirmed Tuesday. Fisher, an iconic actress and writer best known for her role as Princess Leia (and later General Leia) in the Star Wars franchise, passed away early on Dec. 27, and, as we remember her life off-screen, we can't help but want to find some solace in her life onscreen. In this spirit, if you're looking to relive some of Fisher's best moments as Princess Leia, the Jabba the Hut scene is the one Princess Leia that every Carrie Fisher fan needs to watch today.

Princess Leia's metal bikini in Episode VI — Return of the Jedi has been a topic of great debate, and great lust, for years. Is it sexist or feminist? Objectifying and gross, or sexy and empowering? 30 years later, it's impossible to tell. What is an undeniable fact about Leia's time in the metal bikini, however, is how awesome Carrie Fisher is, particularly in the scene where Princess Leia kills Jabba the Hut. After being chained up and kept as a slave to the gross Jabba, Leia gets her chance to strangle Jabba with the very chain he used to keep her hostage. If that's not badass, I don't know what is.

Fisher has noted, many times, that she did not enjoy wearing the metal bikini that has been the subject of such adoration and ire. In a recent interview with NPR's Fresh Air, Fisher admitted that the outfit was "not a style choice" she made willingly. But, there is no denying that, sexy outfit or not, Leia is the one who kills Jabba. Not Han, not Luke — Leia. It's a truly badass moment, one that cemented Princess Leia's status as the ultimate space goddess. "I sawed his neck off with that chain that I killed him with. I really relished that because I hated wearing that outfit and sitting there rigid and straight, and I couldn't wait to kill him," Fisher told NPR.

Truth be told, ever Princess Leia scene is a scene worth watching because of Fisher's strength as a performer, but her refusal to play the damsel is what makes this Jabba the Hut death scene an absolute necessity.