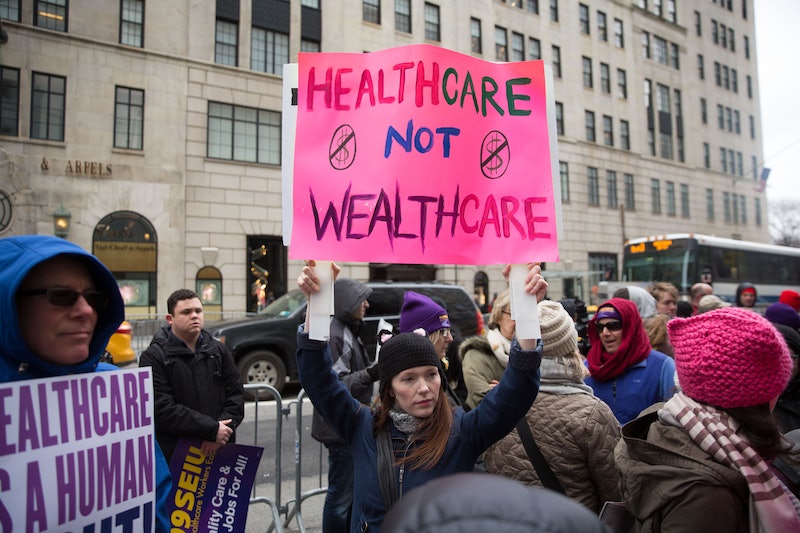 On Thursday, the House passed the American Health Care Act with 217 representatives voting favor of repealing the Affordable Care Act (ACA, also known as Obamacare) and replacing it with the Republican-led alternative. Want to know how to take immediate action against the AHCA and make sure you have the ears of the 217 Republicans who said “Yeah, sure, OK” to stripping health care coverage for millions of Americans? Donate to Democrats who are challenging House Republican seats in 2018 and other upcoming elections. It might be the most essential thing to making sure that the bill fails to pass the Senate.

If you want to know where to invest your time, money, and energy, pay particular attention to how Republicans from Clinton-won districts voted for the AHCA. Many of the House Republicans who voted against the AHCA come from districts that went to Hillary Clinton in the 2016 Presidential election. However, 14 Republicans whose district voted for Clinton voted “yes” on Thursday.

The New York Times has put together a handy chart to see how your representatives voted on the AHCA. In addition to listing the 217 House members who passed the bill (all of whom are Republican), you can also see breakdowns based on categories like which “yes” votes came from representatives who were publicly undecided or unclear prior to the vote.

20 Republicans in the House did vote against the bill, as did all 193 Democrats. Curious which Republican House members switched how they voted from the initial failed health care bill? This vote count chart from the Washington Post denotes which congresspersons flipped their votes from last time they tried to pass the bill.

What about calling your senator ahead of the AHCA vote in the Senate? Certainly do that, as well as partake in the other ways to protest the GOP’s health care bill. However, blowback against House members who voted in its favor is arguably the most immediately pressing action to take.

As director of MoveOn.org Ben Winkler states in this recent Twitter thread on the AHCA, Senators in swing states will be looking to see how constituents respond to Thursday’s vote. Like Winkler says in one tweet, “Citizens' jobs will be to make clear that voting for AHCA is politically toxic.” So, first, send a clear message to your House representatives. In turn, you will also be sending a message to your senators.

Even if you don’t live in a swing state or your congressperson voted no on the AHCA, you can still help turn the House blue by donating to upcoming candidate funds. ActBlue has set up “nominee funds” where you can contribute money to campaigns for Democratic nominees. When you contribute money now, the donation will be held in escrow until after each state’s primary. After that, all the donations will be given to the Democratic nominee to be used in his or her campaign.

So first, let your House representatives know you’re listening, through donation and calls and town halls. Then, start calling your senators. Don’t forget to stay up-to-date on local elections and find out when special elections are being held near you. And for the love of all that is good, make sure you’re registered to vote.