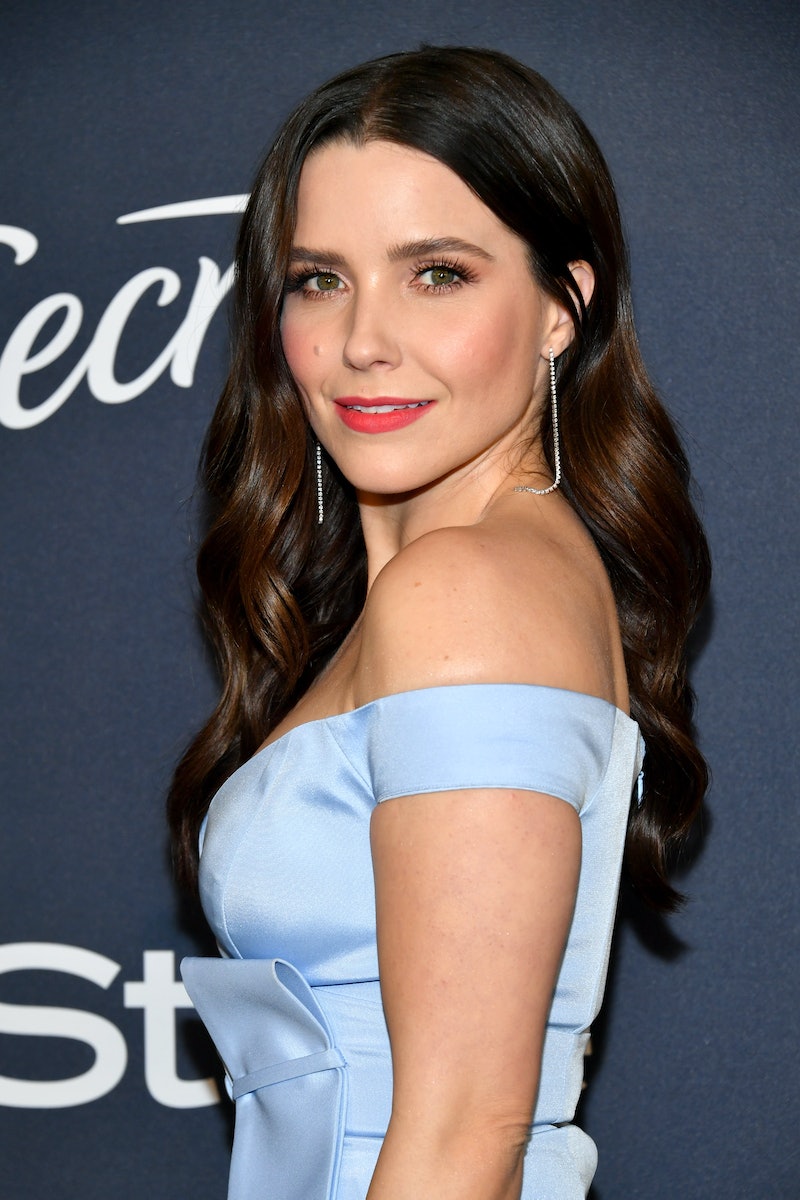 The Golden Globes doubled as a high school reunion on Sunday night, when three One Tree Hill stars reunited at a Golden Globes afterparty, showing off some Ravens pride at the InStyle and Warner Bros. event. Former Tree Hill students Sophia Bush (Brooke), Bryan Greenberg (Jake), and Danneel Ackles (Rachel) hopped into InStyle's elevator setup to have some throwback fun that included Greenberg bouncing a basketball while Bush and Ackles cheered him on with pompoms. The scene is so nostalgic, it will take you right back to One Tree Hill's glory days when Brooke, Jake, and Rachel were dealing with totally normal high school stuff like being imprisoned for sending your baby daughter away to keep her mother from getting custody, or having an affair with a classmate's dad. (OK, so in retrospect, their high school experience wasn't that normal.)

Seeing the trio gamely nod to their classic WB/CW show is yet another reminder of how close the cast remains. In fact, the OTH cast is so tight they don't save reunions for fancy Hollywood events. In 2019 alone, Hilarie Burton and Lifetime brought together OTH alums Tyler Hilton, Colin Fickes, Antwon Tanner, and Lee Norris for the holiday movie A Christmas Wish, and guests at Burton's wedding to Jeffrey Dean Morgan included her co-stars Bethany Joy Lenz, Bush, and Ackles. And in 2018, Burton, Tanner, Hilton, and Robert Buckley filmed the Lifetime movie The Christmas Contract, while the Scott brothers Chad Michael Murray and James Lafferty posed for an iconic photo in Wilmington, North Carolina (where OTH was filmed), during a fan convention for the show.

In September 2019, Burton summed up why the cast remains so close with an insightful tweet celebrating One Tree Hill's 16th anniversary. She tweeted, "Last night @JDMorgan and I were talking about the roles that will live with us forever. He has his. Mine is Peyton Sawyer. I poured so much of myself into her. And I love all my brothers and sisters from OTH that did the same with their characters. Family. Forever."

The cast is something of a family to fans, too. After Bush tweeted out the InStyle video with the simple caption "Favorites," love for the actors and the show started pouring in on Twitter. One user, @riversdestiel, wrote, "love that brooke and rachel reunion (and of course loving jake too)," @PrisillaSofia added, "Allllll the feels in this one little vid!!!", while a chorus of other fans showered the post in heart emojis.

Bush, Ackles, and Greenberg's reunion may not have happened onscreen, but their special OTH elevator moment was a Golden Globes highlight for everyone who is still Team Ravens after all these years.

More like this
This 'One Tree Hill' Wardrobe Error Is Going Viral On TikTok
By Brad Witter
The Banned 'Friends' Ad Shows Monica As You’ve Never Seen Her Before
By Sam Ramsden
'Friends' Star Maggie Wheeler Offers Support To Matthew Perry After Reading His Memoir
By Alyssa Lapid
Twitter Is Having A Field Day Over Mr Blobby’s Costume Selling For £62k
By Catharina Cheung
Get Even More From Bustle — Sign Up For The Newsletter
From hair trends to relationship advice, our daily newsletter has everything you need to sound like a person who’s on TikTok, even if you aren’t.