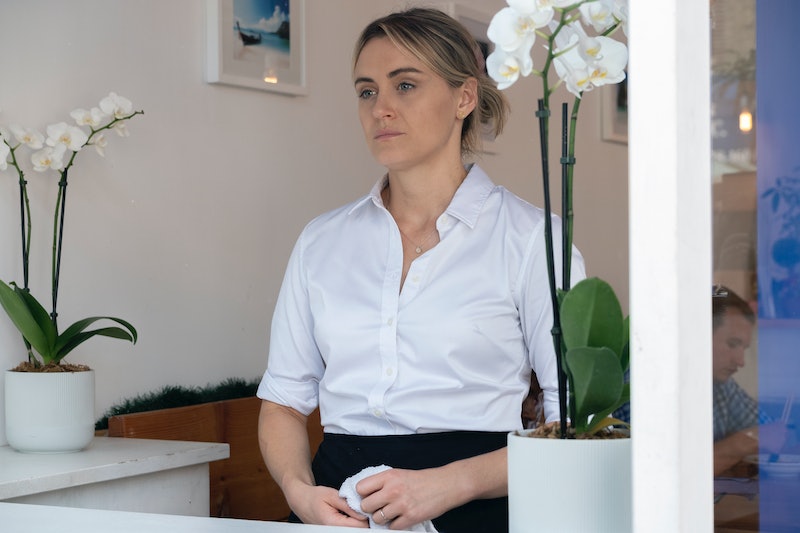 With the final season fast approaching, fans may be curious to know how the Orange is the New Black book ends. However, those looking to glean some insight about how the TV version will tie things up will unfortunately be disappointed, as the show has already expanded past the book. Still, as OITNB closes its final chapter, it's worth revisiting the original story that made it possible.

As you likely already know, Orange is the New Black is based on Piper Kerman's 2010 memoir, titled Orange is the New Black: My Year In a Women's Prison. Kerman was sentenced to 15 months in a federal prison for drug-trafficking and money-laundering years ago after being implicated by her former lover Catherine Cleary Wolters (called Nora Jansen in the book, and Alex Vause in the show). Kerman served 13 of the 15 months in a minimum-security prison in Danbury, Connecticut in 2004, while Wolters served a much longer sentence in California. The book takes place entirely from Kerman's point of view, and serves as a brief look at our criminal system through the eyes of, as Kerman writes, "a nice blond lady".

Because of the first-person POV, we don't really get to know the other inmates in the book in the same way as we do in the show. While characters like Red, Daya, Taystee, and Sophia were all inspired by someone in real life, a woman who served time with Kerman told Vice that many of the show's depictions are fictionalized or exaggerated. And unlike the numerous tense scenes in the Netflix series, in the book Kerman describes her time as relatively drama-free. She notes that most of the women were surprisingly kind, and that "when a new person arrived, their tribe — white, black, Latino, or the few and far between 'others' — would immediately make note of their situation, get them settled, and steer them through their arrival." Kerman says that the other white women gave her toiletries, stationary, a mug and coffee, and shower shoes when she arrived. They helped her with pedicures, and threw her a birthday party. She personally never got into a fight.

"The television show, the Netflix series, is an adaptation, and there are tremendous liberties taken," Kerman told NPR in 2013. "Parts of the show ... are tremendous departures, and you know, pure fiction dreamed up by Jenji Kohan and by her remarkable team of writers."

That's not to say Kerman's time in prison was easy, but the show and the book are two separate creations that ultimately tell very different stories. As Jessica Grose wrote for Slate, the book isn't a detailed look into these other women's backstories and struggles. Instead, its a very personal "middle-class-transgression" novel — a well-to-do woman endures a period of hardship and then returns to her comfortable life. The novel begins with Kerman and ends with Kerman, so those hoping for some insight into the fates of the rest of the women will ultimately have to watch the show.

The ending of the novel is, in fact, relatively anticlimactic. Both Kerman and Wolters get transferred to Chicago to testify against a co-defendant in their case named Jonathan Bibby. Unlike the show, this is the first time Kerman and Wolters cross paths, and it's not remotely romantic or sexually charged. After a little while, they "settled into a companionable antagonism," Kerman writes. Along with another woman, Kerman and Wolters take the stand, and the jury finds Bibby guilty.

Afterwards, Wolters and the other woman are taken back to their respective prisons to serve out the remaining years of their sentence. Kerman, meanwhile, just stays at the Chicago prison, since she only has one week left. Alone in Chicago, missing the routine and community of Danbury, and overwhelmed with guilt that she is soon to be free, Kerman weeps in her bunk. Shortly after, she's officially released from prison, and the guard lets her out onto "an empty side street ... with a slice of gray sky above us."

The guard walks her around to the front, and the book ends with these final lines: "I saw Larry, standing in front of the MCC, talking on his phone, until he turned and saw me. And then I was running, as fast as I could. No one could stop me."

And that's it! It's a happy, tidy ending, but not exactly the juicy spoiler fans of the show might be looking for. It just goes to show that Kohan really built on Kerman' story and turned what was a very personal, specific tale into a sprawling narrative that's funny, emotional, and ultimately much more politically meaningful.

More like this
The OG Power Rangers Are Returning For A Spandex-Clad Special
By El Hunt
Here’s Everything Coming To & Leaving Netflix In February
By Jake Viswanath
Everything To Know About A Potential 'Lockwood & Co.' Season 2
By Gretchen Smail
All The ’70s Easter Eggs You Missed In 'That ’90s Show'
By Grace Wehniainen
Get Even More From Bustle — Sign Up For The Newsletter
From hair trends to relationship advice, our daily newsletter has everything you need to sound like a person who’s on TikTok, even if you aren’t.