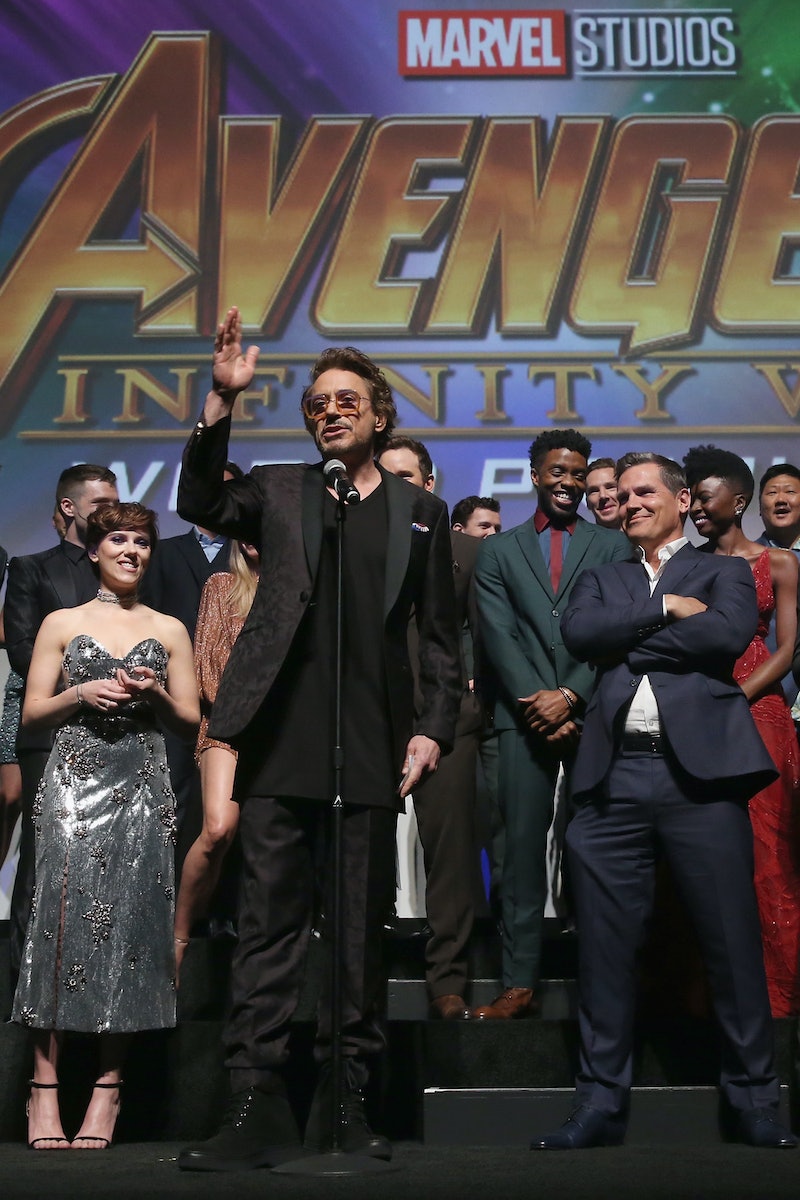 After the recent release of the superhero-filled Avengers: Infinity War, it would seem some of the team's original members were feeling nostalgic for the franchise's early days. As reported by Entertainment Weekly, Robert Downey Jr. confirmed that five out of six of the original Avengers got matching tattoos. Downey, Scarlett Johansson, Chris Hemsworth, Jeremy Renner, and Chris Evans all received Avengers-themed tattoos, as did their tattoo artist, who served as the honorary sixth member of the team since Mark Ruffalo opted out. The choice to remember their history together feels like a sign of unity from the team whose days together may be numbered — and the internet noticed. Spoilers ahead for Avengers: Infinity Wars.

In Instagram pictures from the eventful day, tattoo artist Joshua Lord of New York's East Side Ink Tattoo can be seen posing with Downey, Johansson, Renner, and Hemsworth. Though Chris Evans does not appear in any of the pictures or videos, he was also tagged by Lord and Renner in their posts. Downey told EW,

"Five of the original six Avengers got a tattoo. And the sixth was the tattoo artist, who gave it to five of us, the one who opted out being Mark Ruffalo. It was (Scarlett) Johansson's idea, and she and (Chris) Evans did it in New York. Then, their New York guy, Josh Lord, who is amazing, flew out to L.A., he did me, did (Jeremy) Renner, and then we just bullied (Chris) Hemsworth into doing it, and he got it."

In an Instagram post on Monday, May 7, Downey shared a video of him receiving the tattoo, which has several elements that could be seen as significant. At the center of the design is the letter "A" as it appears in the front of the word "Avengers" on movie posters (with an arrow going through the middle and a circular design around it). The circular element morphs into the number six, which could be significant in that there were six heroes in the original Avengers — Iron Man, Captain America, Black Widow, Hawkeye, Thor, and the Hulk — and this month marks the sixth anniversary of the original movie's May 4, 2012 release. It also looks a bit like a five-point star, which Captain America sports on his iconic shield.

Though the other Avengers did not post pictures of themselves showing off ink, in a recent picture of Johansson on the red carpet she appears to have the same design on her upper inner arm.

Both Renner and Downey posted videos of themselves alongside Lord. In one post, Renner included a picture of himself pointing at a tattoo on Lord's leg with the caption,

"Well team, we did it...? Thank you @joshualord for sharing ink with us all @avengers much love #eastsideink#bondedforlife."

It turns out that the tattoo Lord is sporting was part of a group effort from the actors. According to Downey, the game tattoo artist allowed each one of the stars to draw part of his tattoo, which did not come out quite as good as the others, as you might expect. "Each one of us drew a line on the artist with his own tattoo gun and it was a total massacre," Downey told EW. "Each of us contributed to giving the tattoo artist the sixth tattoo that he designed for us."

The bonding experience comes at time when the fate of the heroes has never looked more uncertain. Though all of the original Avengers either survived Thanos' mass killing at the end of Avengers: Infinity War — Captain America, Black Widow, Iron Man, and Thor — or, in the case of Hawkeye, didn't appear in the film at all and are therefore presumed to be alive, that doesn't mean that they will survive the upcoming fourth installment. Evans has spoken quite openly about wanting Avengers 4 to be his last with the Marvel Cinematic Universe and the fate for the others remains unclear — Downey's contract is also up after this next movie.

Avengers fans, who are still reeling from Infinity War, shared their glee over the matching tattoos on Twitter.

Some people felt inspired by the idea.

Others noticed that one OG Avenger, Ruffalo was missing from the pictures and hashtags.

The Avengers cast isn't the first team of actors to get a matching tattoo. Nine co-stars from The Lord of the Rings got the Elvish number "9" tattooed on their bodies, while the Stark sisters from Game of Thrones Maisie Williams and Sophie Turner also have matching tats.

It seems like a pretty sweet way for this group of actors to remember their time together, no matter what Avengers 4 has in store for their characters.