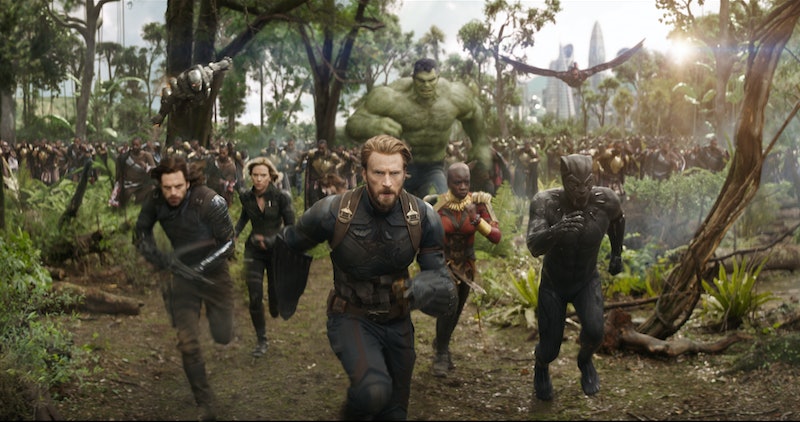 Marvel Entertainment/YouTube
By Shannon Carlin
May 2, 2018

In the final moments of Infinity War, Thanos gets the sixth and final infinity stone, giving him the power to wipe out half the Earth's population. And with it, taking out half of your favorite Marvel superheroes including Black Panther (Chadwick Boseman), Spider-Man (Tom Holland), and Scarlet Witch (Elizabeth Olsen). In an interview with Buzzfeed, writer Christopher Markus admitted that the ending is causing "a gut punch to people in way that I didn't fully [realize]."

Unfortunately, no one's guts are going to feel any better after this interview in which, Markus and his co-writer Stephen McFeely said the deaths, which included not just those who disappeared, but the killing of Loki (Tom Hiddleston), Heimdall (Idris Elba), Gamora (Zoe Saldana), and Vision (Paul Bettany), are permanent. Markus said:

“[Avengers 4] doesn’t do what you think it does. It is a different movie than you think it is. Also…[the deaths are] real. I just want to tell you it’s real, and the sooner you accept that, the sooner you will be able to move on to the next stage of grief.”

This of course, doesn't mean some of the heroes won't be back — after all, Black Panther, Spider-man, and the Guardians of the Galaxy have new movies on the way — but the writers say everything isn't going to just go back to normal. Those that do return will definitely not be the same. Instead, Markus told BuzzFeed, "We broke your heart" with Infinity War, “now we're going to blow your mind!”

To do those things, the guys said they had to kill off some of your favorite characters, the big ones like Black Panther and Spider-man, to show that Thanos wasn't fooling around. “We wanted that thing that happens at the end of that movie to have as much impact as possible,” Markus said to BuzzFeed. “If you're very carefully getting rid of your supporting cast, then it does seem like you’re pulling your punch.”

As for how Markus and McFeely chose which heroes would stick around for the as-yet-untitled 2019 Infinity War sequel, it was about serving the story. "We were making some choices based on some characters we knew were going to leave us at the end of the first movie, so they got highlighted in the first movie," McFeely explained to BuzzFeed. "And some who were going to be in the second movie more maybe got less attention or less screentime [in Infinity War]."

That includes Captain America (Chris Evans) and Black Widow (Scarlett Johansson), who will be very much a big part of Avengers 4 after being relegated to the supporting cast in Infinity War. And yes, Hawkeye will be back, too. The writers even said they "gave him a really good story.”

To better understand that story, Markus and McFeely said that fans should see Marvel's upcoming films: this summer's Ant-man and the Wasp, and Captain Marvel, who is going to be Earth's greatest hope in the next Avengers, but first will get her own standalone movie next year.

“My hope is the conversation you and I will have a year from now, you’ll have a sense of the choices we’ve made over the course of an entire year of Marvel movies,” McFeely told BuzzFeed. “There’s a relationship between them all.”

Basically, Thanos might have gotten what he wanted in Infinity War, but that doesn't mean fans won't get what they want in Avengers 4. Specifically, some closure about the fate of their favorite superheroes who might find their way back from the dead, but will definitely not be the same.

More like this
The Biggest Differences Between 'Bullet Train' & The Book It’s Based On
By Arya Roshanian
'The Sandman’s Ending Is A Departure From Neil Gaiman’s Comic Book Series
By Kadin Burnett
The Ending Of 'Prey,' Explained
By Morgan Leigh Davies
'The Simpsons' Will *Finally* Address How They “Predict The Future”
By Sam Ramsden
Get Even More From Bustle — Sign Up For The Newsletter