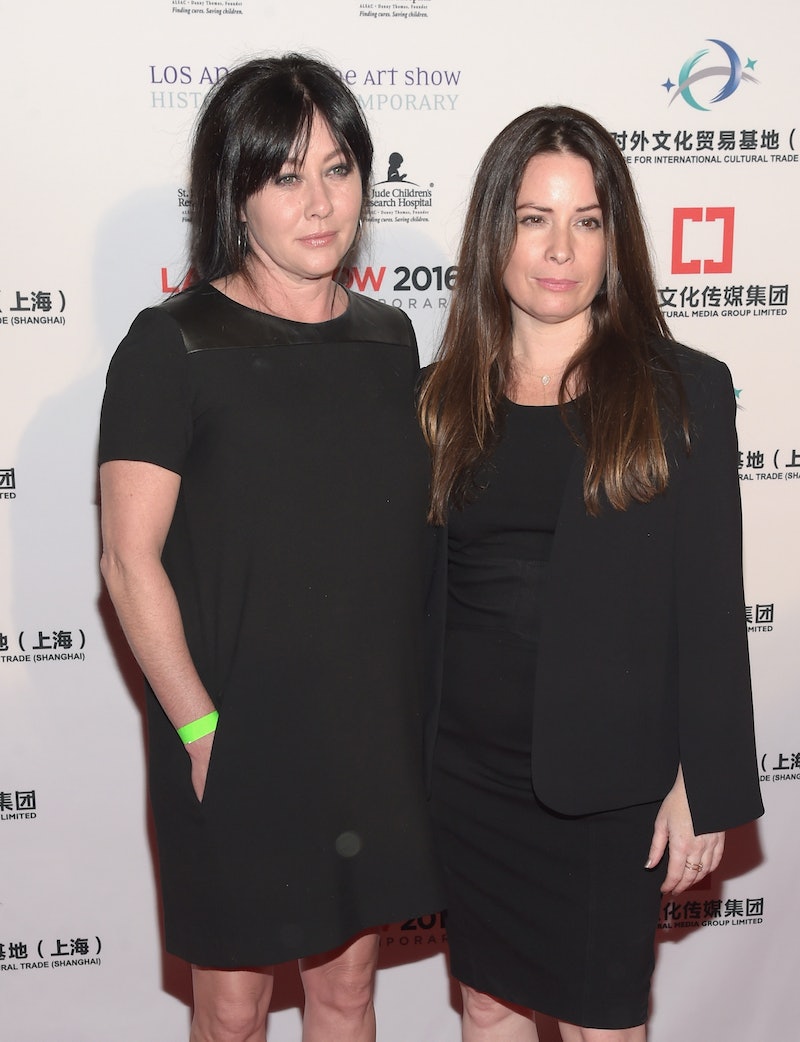 Dust off the Book of Shadows, because there's a new set of Charmed Ones in town. A remake of the beloved Charmed series has been in the works for quite some time, and while there was debate over whether the witchy reboot would ever see the light of day, the magical moment is finally here. The Charmed reboot premieres on Oct. 14 at 9 p.m. E.T. on the CW, however not everyone is happy about it. The original Charmed cast's response to the reboot indicates that the first four Halliwell sisters aren't exactly enchanted with this turn of events.

All four of the original sisters — Shannen Doherty (Prue), Holly Marie Combs (Piper), Alyssa Milano (Phoebe), and Rose McGowan (Paige) — have weighed in on Twitter after hearing that their signature series, which ran from 1998 to 2006, was getting tossed into the reboot machine. Fans were initially stoked about the revival, but not about how it was being billed.

The CW called the new series, produced by Jane the Virgin creator Jennie Snyder Urman, "a fierce, funny, feminist reboot of the original series centers on three sisters in a college town who discover they are witches. Between vanquishing supernatural demons, tearing down the patriarchy, and maintaining familial bonds, a witch's work is never done." Many felt that the show had always appreciated the show because they felt it was already all of those things, and were bummed that the original cast wasn't asked to participate. Soon after, the original cast members decided to weigh in.

Doherty, who left the series in 2001, was one of the first to respond to news of the revival, and took a diplomatic route. On Jan. 27, she wrote in one of many tweets on the subject, "Their wording is terrible and a bit offensive. But, everyone makes mistakes. Perhaps with the backlash they will be more thoughtful in future."

In January, Combs also went on Twitter to share her feelings and she was a little less diplomatic than her former co-star and friend, Doherty. She wrote, "Charmed belongs to the 4 of us, our vast amount of writers, crews and predominantly the fans. FYI you will not fool them by owning a title/stamp. So bye."

By May, Combs took the time to tweet her own response to a Yahoo article whose headline read, "Holly Marie Combs slams Charmed reboot (again)," clarifying that her reaction to the series was actually more nuanced and complicated than most of the tabloids would lead fans to believe. She added:

"Let me say first that I appreciate the jobs and opportunities the Charmed reboot has created. But I will never understand what is fierce, funny, or feminist in creating a show that basically says the original actresses are too old to do a job they did 12 years ago."

Late this summer, Milano gave an exclusive interview to Entertainment Tonight in which she also expressed disappointment that the CW had made no effort to reach out to the original stars, but wished the reboot all the best going forward. She said:

"I wish that they would have come to us and we would have been involved since the beginning. But having said that, I do hope that it reaches the newer generation and impacts that generation the way ours was able to do for its generation."

Milano also added that the chances of Phoebe making a surprise cameo on the new show are slim to none. "I think that ship has sailed for me."

Rose McGowan hasn't mentioned the Charmed reboot since news of one originally broke the internet way back in 2013, but she pretty much summed it all up with her original tweets that read, "They really are running out of ideas in Hollywood." Fair enough.

But just because she hasn't talked about the revival doesn't mean that she hasn't thought about her time on the original Charmed. In 2016, McGowan posted on Instagram that she regrets the way she and Doherty were pitted against one another by Hollywood and the media at the time the original series was on the air. Bearing that in mind, I'd be surprised if McGowan would risk getting into another media feud with the women of the new Charmed series.

As a long-time fan of Charmed myself, I can't help but agree with all the reservations that the original actors have expressed over the series. But also like them, I'm going to do my very best not to hold that against these new actors. Fans of the original should give the new series a chance, regardless of whether it can hold a conjuring candle to the original. Or, you know, just not watch it all and leave it alone.