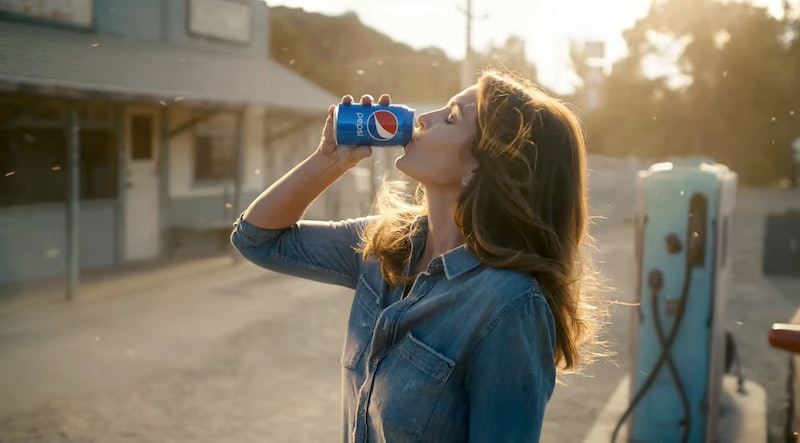 In the early 1990s, one of the most marketable supermodels around was Cindy Crawford. So soda company Pepsi channeled her appeal for an iconic Super Bowl commercial in 1992. And in 2018, Crawford is starring in a new Pepsi Super Bowl commercial. The new advertisement manages to bring back the nostalgia of her '90s spot while highlighting how much can change in a quarter of a century.

As Billboard reported last year, PepsiCo has sponsored the Super Bowl Halftime show since 2013. And Justin Timberlake's performance at Super Bowl LII is no exception. But before Timberlake takes the Halftime stage, Variety reports that a 30-second Pepsi commercial "celebrating every generation" will air. Many celebrities who have endorsed Pepsi before pop up, including Britney Spears, Kyrie Irving (as his Uncle Drew character), Jeff Gordon, and Michael Jackson. In the new spot, Crawford makes a brief appearance alongside her model son Presley Walker Gerber.

Jimmy Fallon narrates as Gerber gets himself a Pepsi from a gas station vending machine. His 51-year-old mom pops out of a red Lamborghini in a denim shirt and white pants. She takes off her sunglasses and whips her hair back and forth (something Crawford's been doing long before Willow Smith was even born) before taking a long drink from own can of Pepsi.

There's also an extended version of the commercial available online that features just a few more seconds of Crawford. In this one, Fallon says, "Show 'em how it's done" to Crawford as she drinks the soda.

In Crawford's original Pepsi commercial, she was the one hitting up a gas station vending machine — not her son. The only children around were not hers, but two onlooking boys. While the two kids appear to be admiring Crawford, it turns out they are more impressed with the look of Pepsi's new can. Set to Doris Troy's "Just One Look," there's a sleepy hot summer day vibe to the 1992 commercial which is in stark contrast to the high-octane 2018 one.

Crawford does channel some moments from her original ad in the new one. She memorably rocked a tight white tank top and cut-off jean shorts in 1992 — an outfit combination that she reverses in 2018 for a more mature, but still classically cool, look. She takes off her shades as she exits the red Lamborghini at the gas station in both. And while the design on the Pepsi can has changed, there's something about Crawford guzzling down the soft drink that remains timeless.

"To this day, people come up to me to talk about how much they loved my original Pepsi spot from '92," Crawford said in a statement for PepsiCo about the 2018 ad. "The commercial was a big moment for me and has spanned generations. I am proud to play a role in this iconic pop-culture phenom and excited for fans to see our new take on the Pepsi spot during Super Bowl."

But the 2018 commercial is not the first time that Crawford recreated her Super Bowl spot. She's actually done it twice before now. In 2002, Crawford pulled up to the Halfway Cafe again and drew the attention of two boys (different children actors wearing nearly identical outfits to the original kids). She still wears a white shirt — a peasant top this time around — and jean shorts, but she drinks from a Diet Pepsi can. "Some things never change," Crawford says, before revealing her two young children in the car — which has changed from a sports car to a Jeep. "And some things do." Technically, this was 18-year-old Gerber's first Pepsi commercial appearance with his mom. Crawford's model daughter, Kaia Jordan Gerber, also appeared in this revamped ad.

Then, 14 years later, Crawford parodied her commercial with James Corden for The Late Late Show. The model pretty much sticks to the original script, looking as good as she did in 1992. But Corden becomes the real star as he saves the Pepsi day — also rocking a white tank top and jean shorts.

Shortly after Crawford had fun with Corden, Pepsi decided to reuse the commercial with a modern twist. The company unleashed an emoji version of the spot to promote its Pepsimoji packaging. Even with an emoji rendering of Crawford, complete with beauty mark and hoop earrings, it was a far cry from the original.

With so many iterations of Crawford's 1992 Pepsi Super Bowl commercial, it's for the best that the 2018 one isn't an exact replica.

More like this
Watch Emma Raducanu’s Incredible Response To Her Early Wimbledon Exit
By El Hunt
“The Door Is Always Open” For Another 'Breaking Bad' Spin-Off, Says AMC Boss
By El Hunt
Prince William Reveals Charlotte's Hidden Talent In Ultimate Proud Dad Moment
By El Hunt
18 Unanswered Questions From 'The Hills' That Still Haunt Us Today
By Ivana Rihter
Get Even More From Bustle — Sign Up For The Newsletter