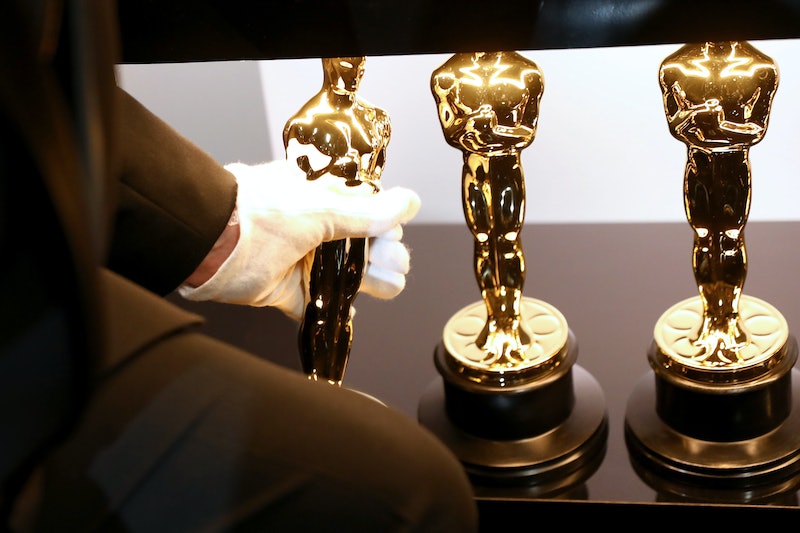 Earlier this week, the Academy of Motion Picture Arts and Sciences announced that they were implementing some changes to the annual Oscars. The first major adjustment was that the ceremony's TV broadcast would be cut off at three hours max, meaning that some awards (they didn't reveal which) would be given during commercial breaks, unseen by those watching at home. The other big change was the implementation of what's being nicknamed the "Most Popular Movie" Oscar, which is pretty self-explanatory. But what the Academy might see as a way of including more blockbusters and tentpoles in the Oscars broadcast sounds a lot like it's going to result in even more male-centric movies winning awards at a ceremony that's already significantly male-dominated.

The official announcement from the Academy about the new category reads, "We will create a new category for outstanding achievement in popular film. Eligibility requirements and other key details will be forthcoming." There's little doubt that this move is in effort to bring a bigger and younger audience to the annual Oscar telecast. The awards show's ratings have been slumping year by year, with analysts reasoning that the decline is both the result of a show that goes on too late into the night and of the films being honored not ones that the average moviegoer would choose.

Yet the "popular movie" category is not the answer. In response to the Academy's announcement, many critics have expressed how this move not only dumbs-down the Oscars, but disrespects the films that would be in the category. (Would you want your movie to be popular, but not good?) But it's also a bad idea because of how many male-dominated movies this award would honor. In the past 10 or so years, most of the most popular movies in America have been giant, summer blockbusters — typically featuring superheroes — that make tons of cash. And as we all know, those kinds of movies are most often made by men and starring men, with women pushed to the sidelines.

It's understandable why the Oscars would want to honor more comic book movies. Back in 2009, when the 92nd Academy Awards expanded the number of Best Picture nominees from five to 10, it was widely reported that the reasoning behind the move had to do with the fact that The Dark Knight was shut out of the category the previous year. Allowing for more honorees, the logic went, would allow for more widely-seen, "popular" movies to earn a stake in the game. Since then, the Best Picture nominees number anywhere from five to 10, though no comic-based movies have yet been nominated for Best Picture.

The "popular movie" category could see more comic book movies get honored at the Oscars, but, as said, superhero movies and big-budget tentpoles are a male-dominated world. Male characters outnumber female characters, male directors outnumber female directors, and male screenwriters outnumber female screenwriters in the biggest movies of the year. If the goal of the new Oscar category is to award a blockbuster as the most popular of the year, then the award will likely be yet another statue handed over to a film that lacks women in practically every aspect. And with the Oscars already incredibly dominated by men, this move sounds like just another award that women are going to be shut out of.

But that's unlikely to happen with this new award, even if the winner is a groundbreaking and representative movie like Black Panther. Even if that film — starring black actors, made by a black director, and featuring many complex female roles — earns the prize, the statuette would be given to the producers, like with the Best Picture award — meaning that the white, male leader of Marvel, Kevin Feige, would likely be taking home the prize.

Yet ultimately, what the result of this new Oscar is going to depend on is what the criteria ends up being for "most popular movie." If the Academy goes by box office alone, then female-centric films might actually get honored. 2017's highest earning movies were Star Wars: The Last Jedi, Beauty and the Beast, and Wonder Woman, while 2016 saw similar results with Rogue One: A Star Wars Story topping the year and Finding Dory close behind. But if it's still male producers that get honored — which is likely consider that of the aforementioned five top earners above, for instance, only one was directed by a woman, and the productions teams of all are populated by a male majority — then it'll still be immensely frustrating.

It's understandable that the Oscars are trying to survive a changing TV landscape and draw more fans. But the new category, in addition to just being a bad idea, sounds like an unfortunate way to go directly against all the progress made in Hollywood to further inclusion over the past few years.