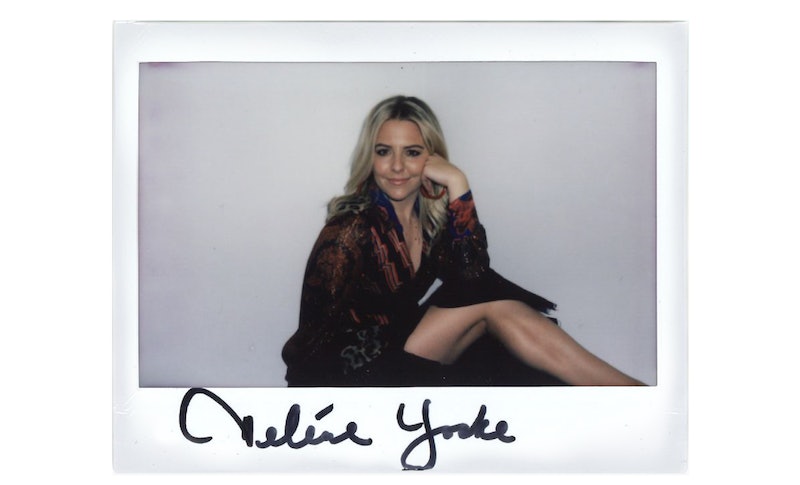 When celebrities hang out with Bustle editors, we want to give them the chance to leave their mark. Literally. So we hand them a pen, a piece of paper, a few questions, and ask them to get creative. The rest is up to them. This time, The Other Two star Heléne Yorke is leaving her mark in the Bustle Booth.

Heléne Yorke specializes in playing hot messes. Her memorable stint on High Maintenance as Lainey, who's one half of the narcissistic, co-dependent duo of insufferable Brooklynites dubbed the "Assholes" by the show's drug dealer, was both scene-stealing and a searing portrait of the gay best friend trope. The performance got her noticed by former SNL co-head writer Chris Kelly, who was looking for someone to play Brooke, the frenetic-yet-aimless older sister whose 13-year-old brother becomes an overnight music sensation on his Comedy Central show The Other Two.

Brooke, too, is a bit of a mess — we're first introduced to her throwing half-eaten pizza into a washing machine — but a lovable one, the kind of person who can be hilariously petty and self-interested, but you know deep down has a heart and a conscience... somewhere. Someone whose life at 30 is in free fall, who needs the right wake-up call to become a better and more purposeful person.

That wake-up call could be the skyrocketing career of her brother Chase, a tween star under the moniker Chase Dreams who a news anchor dubs "the next big white kid" in the vein of Justin Bieber. His success puts Brooke's failures in stark relief: She's a former professional dancer dabbling in real estate to make ends meet who's essentially homeless now that she's moved out of the place she shared with her dim-witted ex-boyfriend Lance, a dopey Foot Locker employee and half-hearted "aspiring shoe designer." She didn't expect her life to look like this, but is it too late to change course?

It's a sentiment that Yorke understands deeply. "It would be a lie to say that my career at every step of the way, things have sort of fallen into place," she says. Sitting in Bustle's offices, she speaks engagingly no matter the topic, but she especially comes to life when we discuss theater, excitedly showing off the Slytherin tote bag she bought while seeing Harry Potter and The Cursed Child and gushing over the news that the Oklahoma! revival is coming to Broadway. The stage was a big part of Yorke's early career, having originated roles in American Psycho and Bullets Over Broadway before an ankle injury during Bring It On: The Musical prompted her to rethink her direction and pivot to TV. She got roles on Masters of Sex, High Maintenance, and The Good Fight, did some voice work, and just about everything in between.

"In the middle of all of this, [I'm] working at the front desk of Physique 57, checking in people for their exercise class so that I can pay my bills and buy groceries," Yorke says, emphasizing the less glamorous parts of being a working actor. But she's remarkably zen about the instability of her profession.

"Nothing is linear, and life isn’t linear… it is one year after the other but it takes all these twists and turns," the actor says. "You can be on the top at one moment, and then all of a sudden find yourself struggling and in the pits, and I think adjusting and adapting and managing expectations is a good lesson for anybody."

It's something that Brooke is slowly learning on The Other Two, as she comes to discover her own personal strengths and weaknesses as she helps Chase navigate the world of fame. But in reality, it's Case Walker, the Music.ly star who plays Chase, who's teaching Yorke a thing or two about commanding an audience — at least when it comes to the world of social media.

"He gives great, savvy social media advice that you’d be dumb not to take," Yorke says with a smile, going on to explain the optimal time, according to Walker, to post on Instagram. "When I was that age, I was just like, trying to figure out why my growing body didn’t fit into my pants anymore." Perhaps the path to Instagram success isn't a straight line, either — but if there's anything we can learn from The Other Two, it's that that's totally OK.

Check out Heléne's answers to our Bustle Booth questionnaire below.