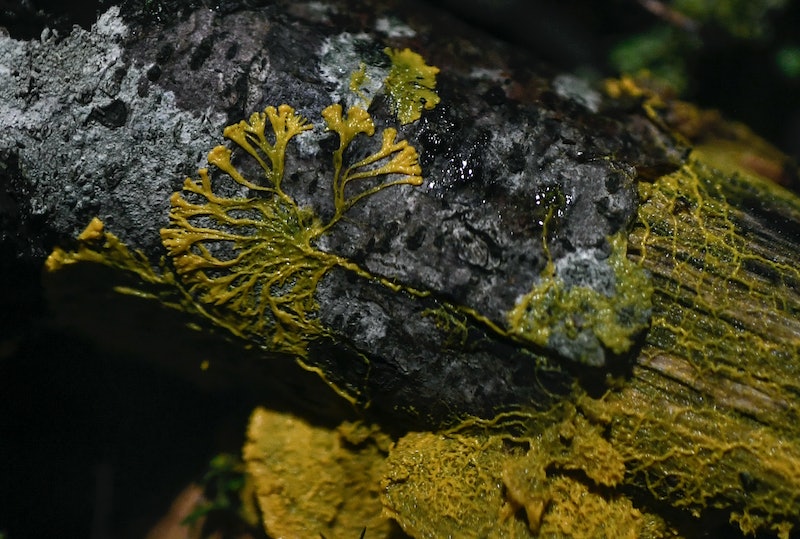 Imagine you could learn without the burden of a brain (and also without the burden of a skull). Imagine you could heal your own wounds in less than three minutes. Imagine you have 720 sexes. (If that's not your dream, well, rest assured that it is my dream and that of many other genderqueer folks). Congratulations, you've just imagined yourself as the new addition to the Paris Zoo: Blob, the single-celled and totally awesome slime creature.

The off-yellow slime mold was formerly known as Physarum polycephalum, which is a type of slime mold that might only have one cell, but sure has a big reach. Blob and other polycephalum like them can move through individual networks of tubes that can slime their way around food. Blob's network of tubes can then transport the nutrients all through their one-celled body, giving the multiple nuclei everything they need to keep functioning.

And you really don't want to mess with that process, because Blob isn't just slimey and networky and frankly adorable. Their species can also learn. Despite literally being a brainless single cell, Blob can learn to avoid substances that irritate it. Living in cool, moist spots like tree trunks and decaying leaves, Blob and other Physarum polycephalum can learn to avoid irritating substances like caffeine, according to a 2016 study published by the journal Proceedings of the Royal Society B.

But wait, Blob wants you to know: there's more. According to a 2010 study published in the Journal of Plant Research, P. polycephalum has 720 unique mating types, meaning that Blob's reproduction can take place in all kinds of ways. And Blob isn't the only one: there are so many animals and plants who switch between multiple sexes throughout their lives that defy the human-created gender binary. Humans, too, have a spectrum of sexes, rather than just two, according to a February 2015 feature in the journal Nature.

So when you go pay homage to Blob in the Paris Zoo, make sure you thank them for being awesome. And for reminding humans, yet again, that things like learning, sex, and gender are so much more complex than we generally believe.