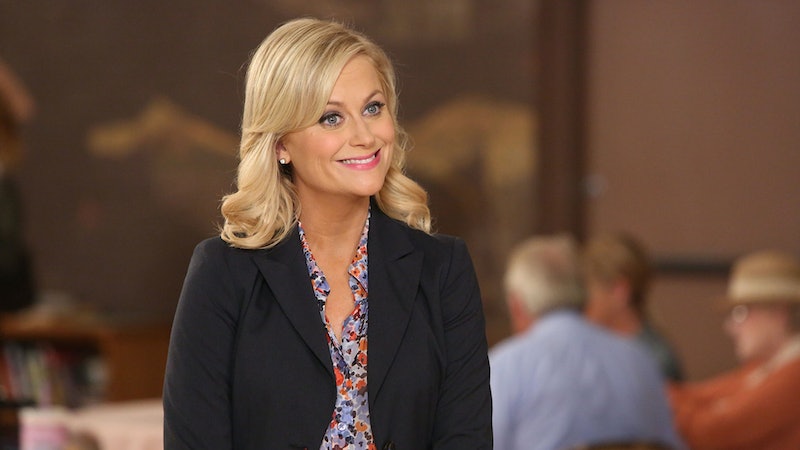 Everyone needs an excuse to treat themselves right now — and thankfully, the residents of Pawnee, Indiana are here with the ultimate treat for us all. On Thursday, April 30, the cast of Parks and Recreation will reunite for a one-time charity episode to benefit Feeding America. Literally the entire cast — including Amy Poehler, Rashida Jones, Nick Offerman, Adam Scott, Aziz Ansari, Aubrey Plaza, Chris Pratt, Rob Lowe, Jim O’Heir, and Retta — will reprise their iconic roles from their respective homes to perform a coronavirus-themed episode for fans on NBC.

Poehler announced the news in a video posted on the show's Twitter account, in which she explained that her "workplace proximity associates, along with our neighbors at State Farm," are raising money for Feeding America with a brand new episode of the beloved sitcom. "We hope you'll join us" for the "very special Parks and Rec." In addition to raising money for the charity, which is providing food to people in need who are affected by the pandemic, the cast and crew will also match donations of up to $50,000 during the telecast, in partnership with State Farm, Subaru of America, Inc., and NBCUniversal.

According to Vulture, the episode will follow Leslie Knope (Poehler), as she attempts to stay connected to her friends and co-workers during quarantine. "Like a lot of other people, we were looking for ways to help and felt that bringing these characters back for a night could raise some money,” executive producer Michael Schur said in a statement. "I sent a hopeful email to the cast and they all got back to me within 45 minutes."

While Parks and Recreation — which ran from 2009 until 2015, and followed an idealistic city government employee and a group of her eccentric hilarious co-workers in small town Indiana — amassed a passionate, dedicated fanbase both during its run and in the years since it ended. However, the fans aren't the only ones who are enjoying rewatching the series while practicing social distancing; during a recent appearance on Late Night with Seth Meyers, Poehler revealed she was watching Parks and Recreation back for the first time.

"It's really sweet," she told Meyers about her quarantine marathon. "I've been texting the cast to show them videos of [sons Archie and Abel] watching the show, which is awesome. And I don't just say this because I'm on it, it is such a good show to watch right now because it makes you feel good and it's about a bunch of people working together to solve problems."

It's not just the chance to follow in their characters' footsteps and do their part to help those affected by the coronavirus that has enticed the cast to reprise their roles, as most of the Parks and Rec leads have stated that they would love to work together once more. "Oh, man, as long as I'm in town, yeah, I'll do it," Chris Pratt told E! News in June 2018 about participating in a possible Parks & Rec reunion. "It films like 10 minutes from my house so that would be dope. ... I miss Andy too. I would love it. I know I would do it."

Six months later, Poehler herself told Variety at the Smart Girls 10th Anniversary dinner that "I have like six of Leslie’s blazers in my closet, so [I'm available] anytime." Hopefully, Poehler will break out some of those blazers on April 30, when she and the rest of the Parks and Rec cast reprise their iconic roles, one more time.

More like this
The First Trailer For 'That '90s Show' Includes So Many Nods To The Original Series
By Jack Irvin, Alyssa Lapid and Grace Wehniainen
Courteney Cox Recreated An Iconic 'Friends' Scene To Surprise Fans
By El Hunt
What Jen Shah's Delayed Sentencing Could Mean For The 'RHOSLC' Season 3 Reunion
By Brad Witter and Jake Viswanath
The 'Kenan & Kel' Reunion On 'SNL' Took A Dramatic Turn, Thanks To Keke Palmer
By Brad Witter
Get Even More From Bustle — Sign Up For The Newsletter