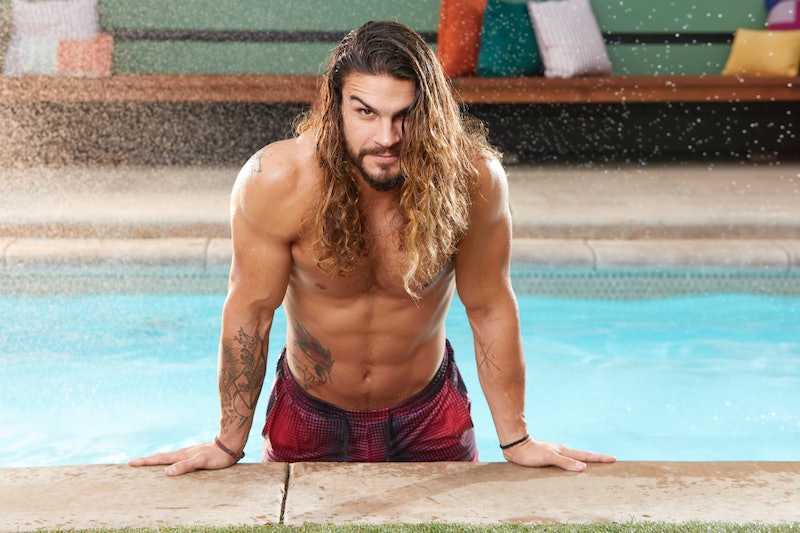 While he's inside the Big Brother house, BB21 contestant Jack has no contact with the outside world and no idea what people are saying about him — which may be for the better. The season started less than a week ago and already fans want him out of the house ASAP. BB's own personal Jason Momoa look-alike is the subject of a petition saying Jack should be removed from Big Brother due to some reportedly sexist and racist comments he made on camera. Bustle's request for comment from CBS was not immediately returned.

The live feeds of Big Brother famously offer fans an uncut and uncensored look at the houseguests 24/7. This footage occasionally features houseguests either treating each other badly or revealing some behavior that likely would be edited out during a television broadcast. But dedicated fans scour these feeds to get a direct look at what houseguests say when they think no one is watching. And that's what happened with Jack.

Fans have been telling others about Jack's actions through Twitter and YouTube, including Jack referring to other houseguests by racist nicknames and making violent threats towards his competitors. None of this reportedly bad behavior has aired on CBS yet. But news traveled on social media quickly, eventually inspiring a Change.org petition to have Jack removed from BB21 that has since been taken down.

Joker's Updates, a popular Big Brother fansite, has been tracking the popularity of the BB21 houseguests over the course of the season based on online polls, and Jack's popularity has plummeted. Jack's fall from the most liked spot on the list to the least-liked is probably a surprise to viewers who tune into the show's multiple weekly episodes on CBS, but live-feed viewers have been watching Jack turn people against him in real-time.

Even other house members have grown tired of how Jack acts around others, with Christie expressing frustration at him shaming fellow members of the house, per Twitter user Big Brother Daily. These comments apparently led to him being pulled aside by producers to talk to him about his actions, as BB Daily reported Jack telling a fellow houseguest that he needs to be "careful" about what he says following a talk with the show's production team.

It's unclear if the Change.org petition had anything to do with Jack getting a talking-to, but the fact that he received some kind of discipline suggests that the producers behind Big Brother are aware that his behavior in the house has been unacceptable.

While the fanbase has expressed distaste with Jack and his actions, the likelihood that he'll be removed from the Big Brother house is slim.

In the history of U.S. Big Brother, only four people have been ejected from the house, usually for some kind of violent altercation. If Jack keeps up his bad behavior, he might find himself getting booted from the house. But more likely than not fans will have to deal with Jack's presence in the BB house until the other houseguests vote to evict him.

More like this
Andy Cohen Apologized To Larsa Pippen After A 'RHOM' Season 5 Reunion Dust-Up
By Brad Witter
This 'Bachelor' Contestant Got Back With Her Bachelor Nation Boyfriend After Going Home
By Grace Wehniainen
These 'Bachelor' Spoilers Suggest Christina Mandrell Is The New Villain
By Grace Wehniainen
All The Clues Clint & Gina Aren’t Still Together After 'MAFS' Season 16
By Brad Witter
Get Even More From Bustle — Sign Up For The Newsletter
From hair trends to relationship advice, our daily newsletter has everything you need to sound like a person who’s on TikTok, even if you aren’t.