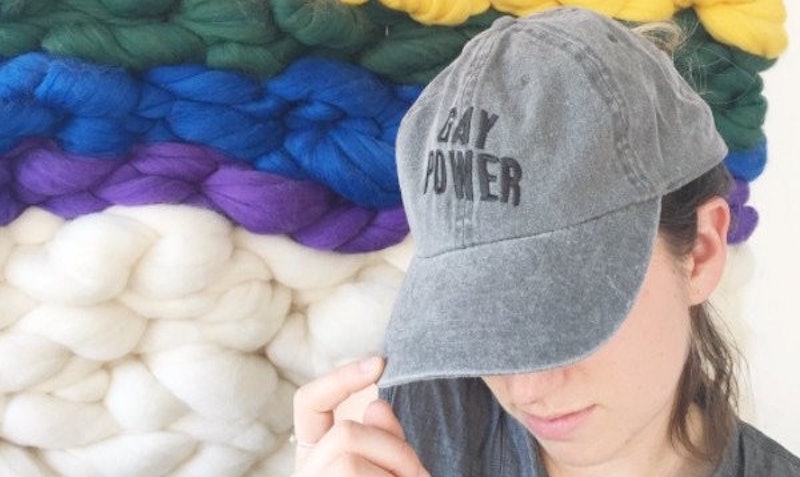 It's June, so Pride Month 2017 is officially upon us. Throughout the month (and for the rest of the summer, really), cities across the globe will be holding parades and festivals to celebrate the LGBTQ community, as well as the history of the LGBTQ movement. It's not only an excuse to break out your best activist gear to get excited about equality, but also a reminder to support the organizations that work to give back and advocate for the LGBTQ community. The good news? You can do both at the same time by putting your money towards merch that gives back to LGBTQ organizations. Win-win.

Massive brands as well as smaller companies are using their products for good, partnering with organizations like the Human Rights Campaign, the Harvey Milk Foundation, and local non-profits and LGBTQ centers to make a difference and give back. From tees to hats to totes, there's something out there for everyone. So if you're looking for the perfect thing to wear to your city's parade or festival, there's nothing better than buying something that actually gives back. Not to mention, it can be a great conversation starter about the organization if anyone offers up a compliment on your Pride-ready gear.

Here are ten pieces that donate a portion of proceeds to LGBTQ organizations.

In the third installment of Everlane's 100% Human collection, the brand is releasing rainbow-hued versions of its signature styles on June 5 (here's a look at more tees, tanks, and sweatshirts from the line). $5 from every purchase goes to the Human Rights Campaign, and the brand has a goal of raising $100,000.

MeUndies launched their Celebrate Yourself campaign complete with colorful polka dot skivvies in honor of Pride, and $1 from every purchase goes to the Los Angeles LGBT Center. Here are the other styles you can choose from to support their efforts.

American Eagle launched their limited-edition collection of tees, boxers and jewelry in partnership with It Gets Better Project, which communicates to the LGBTQ community just that — it gets better. 100 percent of the proceeds from the line will go to the organization (here's a look at what else is on offer).

Pura Vida has a new-school friendship bracelet for pretty much any cause you're passionate about, but 10 percent of the proceeds from this one in particular go toward SD pride.

As part of the Otherwild x Herstory collaboration, 10 percent of the proceeds from this trendy, distressed "dad hat" will go toward the Lesbian Herstory Archives.

100% of proceeds from Levi's LGBT Pride Collection of tanks, shorts, tees, and accessories go to the Stonewall Community Foundation and the Harvey Milk Foundation.

If you want to send your dollars straight to the source, the Human Rights Campaign has a range of pride merch to raise money for their efforts.

This tee is completely customizable — you can choose from 10 different phrases, several colors, and you can even pick which LGBTQ charity you want to receive a portion of the proceeds from your purchase (there are 10 to pick from).

This cozy pullover features a cute rainbow ice cream cone to work in the Pride colors. It's part of the brand's Made For Love collection, and 100 percent of the proceeds from it go toward The Trevor Project.

If you're really looking to splurge in the name of Pride, 100 percent of the proceeds from these fabulous heels will go to the Los Angeles LGBT Center. (And with a price tag that high, that's a relatively big contribution.)