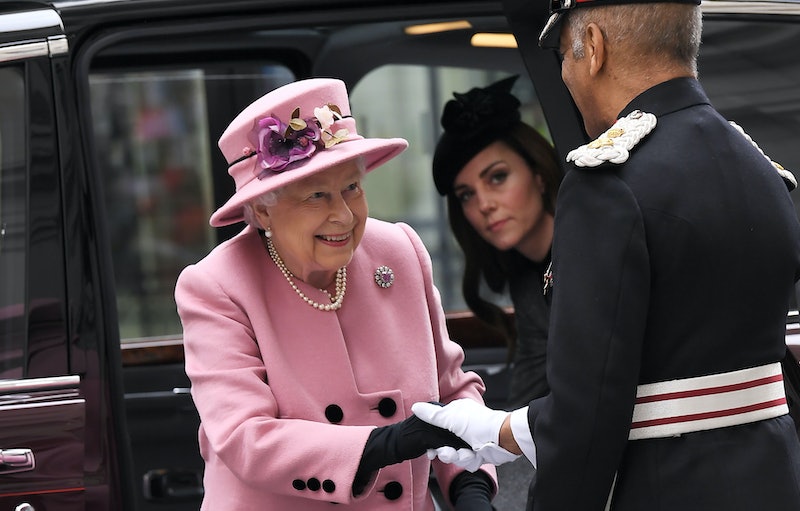 In the latest edition of "ooh they are just like us!" it turns out that like most humans, the royal family band together in order to stay warm. Yes, even the royal family are not immune to the most natural of human needs. But, even so, The Queen and Kate Middleton sharing a blanket at a public appearance is total granny-in-law goals.

Arriving at a joint engagement at King's College London in a trusty old Bentley, you might have thought they would have the heating cranked up in the back. Seemingly, not at all — or so it appears, owing to the blanket in perfect NHS blue that is draped across the royal knees. These pictures, which appear on the Daily Mail, show the pair looking cosy AF when they rocked up to Bush House, which was formerly the headquarters of the famous BBC World Service. However, is now the newest addition to King's College London's extensive property portfolio as a part of the university's campus in London's Strand.

As a part of the visit, the pair were able to see the best of the university's brand spanking new facilities and to meet different members of the university's community. Which must have been such a treat for the Queen as she is a patron of King's College London.

The incredible high tech new features include a virtual trading floor which provides practice for future entrepreneurs. The pair also met students of the Entrepreneurship Institute, which is a support network for King's students looking to improve upon their entrepreneurial skills, experiences, and thinking.

During their tour they also got the chance to see their very own version of Scrapheap Challenge. Oh Dick Strawbridge, be still my beating moustache. OK maybe not quite that, but they did view a pretty lit robotics demonstration. The demo included robotic surgery and how vital information about the body can be measured by sensors made from textiles.

So not only was this a super educational and seemingly pretty fun outing, but also it is a first for the pair. Nope not their first public appearance that is literally their jobs, but their first time appearing just the two of them. Usually in the past they have had another family member alongside.

So, will this be an all day affair? Nope, the Queen headed home after the day out at King's (in fairness she is 92) and Kate is due to head off to The Foundling Museum solo later on in the day. The museum is dedicated to the history of the Foundling Hospital which was the UK's first children's charity. The history of which is sure to be enormously interesting to Kate as not only a mother, but the patron of several children's charities. The museum's staff are expected to take Kate, a keen photographer, on a tour of one of their latest exhibition, Bedrooms of London. It is a photographic exhibition that explores the living quarters of some of the capital's most disadvantaged children, and will no doubt serve well to highlight the poverty that many of the capital's youngest occupants live in.

More like this
Kate Middleton Wore The Ultimate '90s Power Suit
By Sam Ramsden
4 Surprising Celeb Throuples That Got The Internet Talking
By Sophie McEvoy
Mimi Webb’s IRL Situationship Inspired “Red Flags”
By Catharina Cheung
Eurovision Has Been Given A Whole New Look Ahead Of Its Liverpool Debut
By Bustle UK
Get The Very Best Of Bustle/UK
Sign up for Bustle UK's twice-weekly newsletter, featuring the latest must-watch TV, moving personal stories, and expert advice on the hottest viral buys.