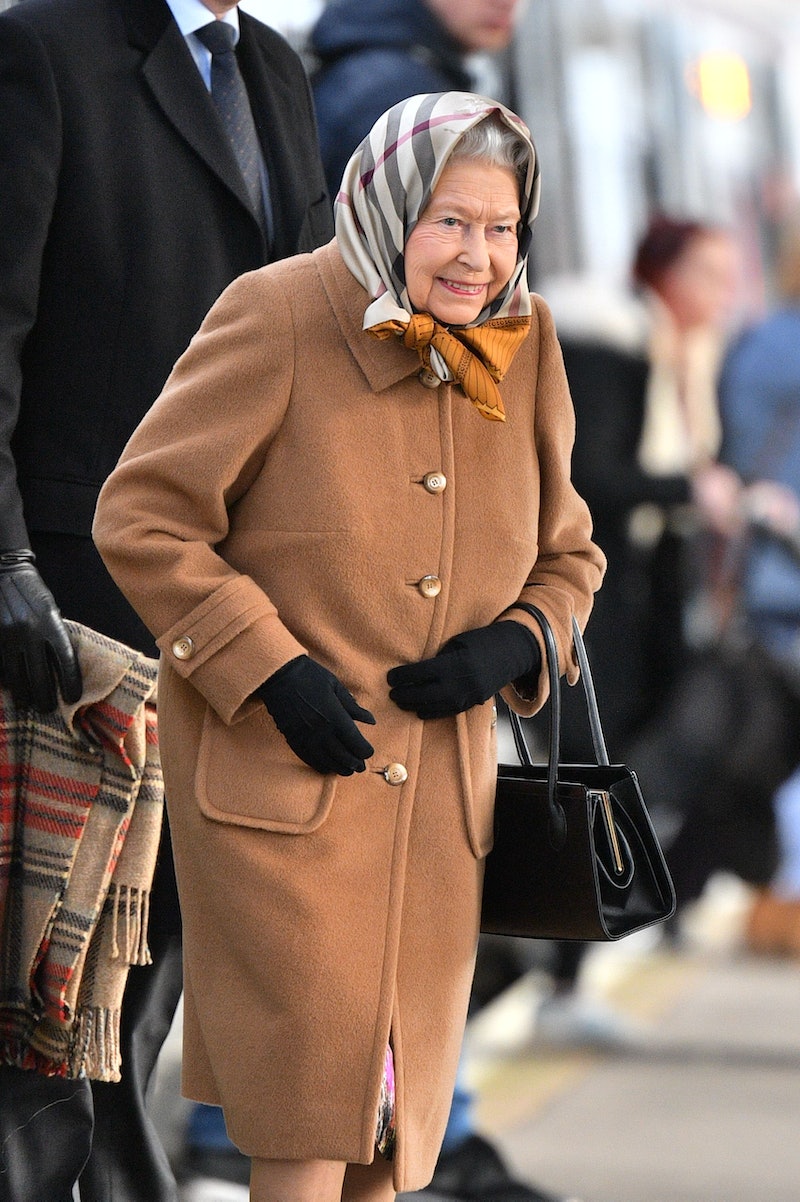 The royal family has lives most of us can only dream of, but this latest news about the Queen of the United Kingdom shows that you actually might have something in common with her after all. Queen Elizabeth II took a public train to Sandringham, where she's spending the Christmas holiday, reminding fans that she's not above taking public transportation.

The queen was seen leaving the train at King's Lynn Station in Norfolk on Thursday, Dec. 20, Entertainment Tonight reported. Her security personnel were traveling with her, and she was seated in first class. It appears she chose to travel separately from her husband, since Prince Philip, Duke of Edinburgh, wasn't seen alongside her on the train.

According to The Daily Mail, the queen was even "mingling" with other passengers on the train, too. Imagine boarding a train for your routine Christmas travel plans, only to make small talk with the queen herself! That's definitely a holiday surprise, and one that fellow passengers probably won't soon forget.

This isn't the first time the queen has traveled by public train ahead of the winter holiday, either. Just last year, she and Prince Philip were seen traveling via train from London King's Cross to King's Lynn Station on their way to the royal family's Christmas festivities.

Some fans couldn't resist comparing the queen's travel plans with those expected from President Trump. (For the record, Trump spent last Christmas at his Mar-a-Lago resort in Florida, and he may be traveling there again this year.)

Other fans are just in awe of the fact that the queen was on a train in the first place.

As far as the royal family's Christmas plans go, it looks like there are plenty of traditions in store. Prince William, Kate Middleton, Prince Harry, and Meghan Markle are reportedly all spending Christmas with the queen and Prince Philip at Sandringham, where the queen has a private estate. The royal family has already started their Christmas festivities, though — the queen hosted a Christmas luncheon at Buckingham Palace, and the Cambridges and Sussexes were at that event, too.

One person who likely won't be joining the royals at Sandringham this year is Meghan Markle's mom, Doria Ragland. Various outlets announced this week that Ragland won't be spending Christmas with the royal family, despite previous reports that she was invited. Since Meghan doesn't have any family in England, some people thought the royals might break with tradition and invite her mom to some of their Christmas festivities, but it remains unclear if a formal invite was extended.

As for what the royals will be eating on Christmas Day, former royal chef Darren McGrady recently told Good Housekeeping that the queen indulges her love of chocolate on the holiday. "The queen is a major chocoholic, particularly dark chocolate, so she always has a chocolate treat on Christmas," the chef said. It sounds like the Cambridges and Sussexes are in for a delicious end to their holiday meal.

The rest of the royal family likely won't be arriving by train. The queen is just one person, after all, and fans would probably go out of their way to take photos of Will and Kate's kids if they were traveling by public transport. But it's nice to see that the queen is interacting with regular citizens ahead of the holiday, and that she's not above taking the good old-fashioned train for her Christmas travels.