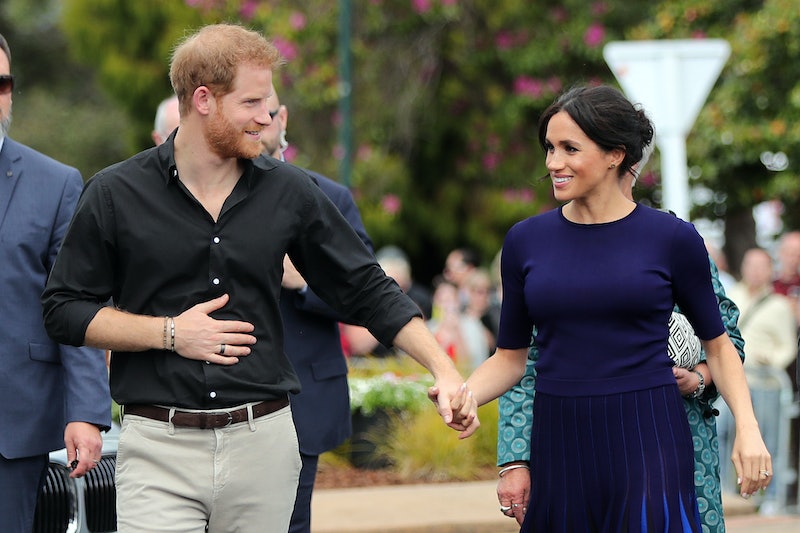 The royal family is getting into the Christmas spirit. Will, Kate, Meghan, and Harry joined the Queen for a Christmas lunch this week, People reported, and it sounds like they had quite the jolly time. Apparently, more than 50 royal family members gathered at Buckingham Palace for the special event, including the Queen of the United Kingdom herself.

People also shared photos of the Cambridges and Sussexes on their way to the event, and it looks like William and Harry got to drive their families themselves. Photos of Will and Kate's car show Prince George and Princess Charlotte in the backseat, along with the family's nanny Maria Teresa Turrion Borrallo. It looks like Prince Louis, who's just eight months old, might not have been a part of the luncheon, but he's probably too young to enjoy the festivities much anyway.

The Queen's husband, Prince Philip, Duke of Edinburgh, was also at the luncheon. People points out that while Prince Philip has officially retired from his public duties, as of last year, he still attends family functions now and then. (He also attended Prince Harry and Meghan Markle's wedding in May, as well as Princess Eugenie and Jack Brooksbank's wedding in October.)

Over the weekend, Kensington Palace's Instagram account shared a photo of the palace's Christmas tree, showing fans a little bit of how Will and Kate are decorating for Christmas. There's a huge 30-foot outdoor tree decorated with gold ornaments, and it's flanked by two smaller — but still impressive — Christmas trees. And if there are three trees outside the palace, fans can only imagine how elaborate the indoor decorations must be.

As for Buckingham Palace's Christmas decorations, there are three trees in the building's Marble Hall. They're all lit and decorated to perfection, making the already impressive palace a truly spectacular sight to behold.

Of course, this week's luncheon isn't the only meal the royal family will be sharing over the holidays. Meghan and Harry — as well as Will and Kate, along with their children — will spend Christmas at Sandringham with the Queen. So the holiday will likely be a well-attended and joyful affair for all of them.

There have been a number of reports about conflict among the royals recently. But if the news of this week's lunch is any indication, the family seems to be getting along just fine. Plus, Kensington Palace actually issued a statement to quash rumors of a so-called feud between Meghan and Kate. The two duchesses may come from different backgrounds, but that doesn't mean they don't get along.

As for the royal family's other Christmas traditions, there is one thing Prince Harry might not join his family members in doing this year. Outlets such as The Telegraph and The Sun reported that Prince Harry might not join in pheasant hunting this year, as Meghan is an avid animal lover. Still, there are plenty of other traditions for all of the royals to take part in, and it looks like all of the reports about discord are a bit overblown.