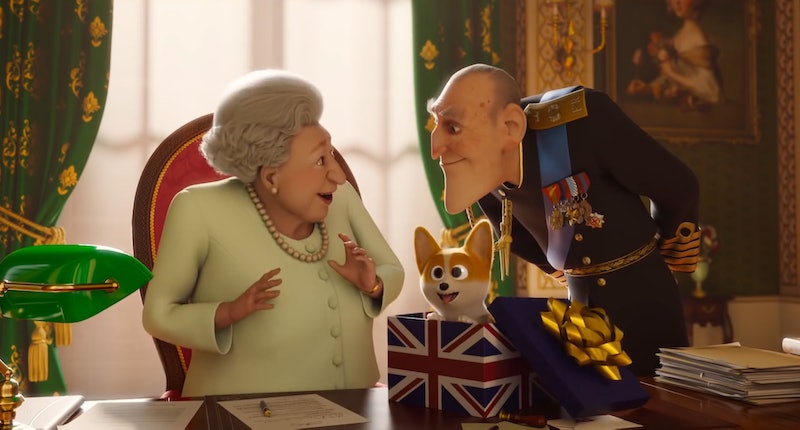 Queen Elizabeth II loves corgis, and now with the help of animation, the rest of the world with adore them just as much — if they aren’t already, of course. As reported by Vanity Fair, there’s a new animated film in the works about one of Her Majesty’s beloved breed, and The Queen’s Corgi trailer shows an adventure with one royal pup in particular.

Coming to theaters in 2019, The Queen’s Corgi keeps a close eye on a super cute puppy named Rex, and all of the trouble the young pup seems to get himself into. The animated film appears to be based on Her Majesty’s longstanding affinity for corgis, and while there’s no telling whether or not Rex is a mirror to one of her own pets, The Queen’s Corgi’s is bound to resonate well with royal family fans across the world. Besides knowing that Her Majesty lives quite an extravagant life, people following the royal family closely know that she’s been a longtime breeder of corgis — so much so, that it’s been said that Her Majesty would often gift pups to friends. And knowing that a film, which seemingly draws on the day-to-day goings on of the royal pets, is on the way is absolutely exciting.

As seen in the trailer, the leading corgi in the film, Rex, has a bit of a mischievous streak, and after rubbing his older puppy siblings the wrong way, finds himself separated from the British monarch and her flock. Rex is tasked with finding his way back to the royals, and along his journey discovers a lot more about himself than he originally bargained for.

As aforementioned, the Queen’s adoration for corgis didn’t just happen overnight, or anything. In fact, the British monarch and her corgis have been hand-in-hand since the 1930s, when her father George VI, bought her very first one — affectionately, and appropriately, named Susan. For the next 70 years, the queen would breed her own flock of corgis until recently, when it was suggested she stop out of fear that Her Majesty may hurt herself when caring for the tiny pups.

The queen’s corgis were quite the celebrities as well, making appearances in The Crown, the opening ceremony of the London 2012 Olympic Games, and even on magazine cover shoots along with Her Majesty. In April 2018, the world mourned the loss of Queen Elizabeth’s final corgi Willow along with the royals, as the pup was put to sleep after battling a “cancer-like illness.” Willow’s death also marked the official end to Her Majesty’s corgi flock — making the news that much harder to bear.

Written by Rob Sprackling and John R. Smith, directed by Ben Stassen and Vincent Kesteloot, The Queen’s Corgi’s looks as if it’ll be the ultimate escape for those obsessed with learning more about the lives of the royal pups. And you can bet that everyone will be racing to the theaters to get a closer look at the queen and those beloved pets.