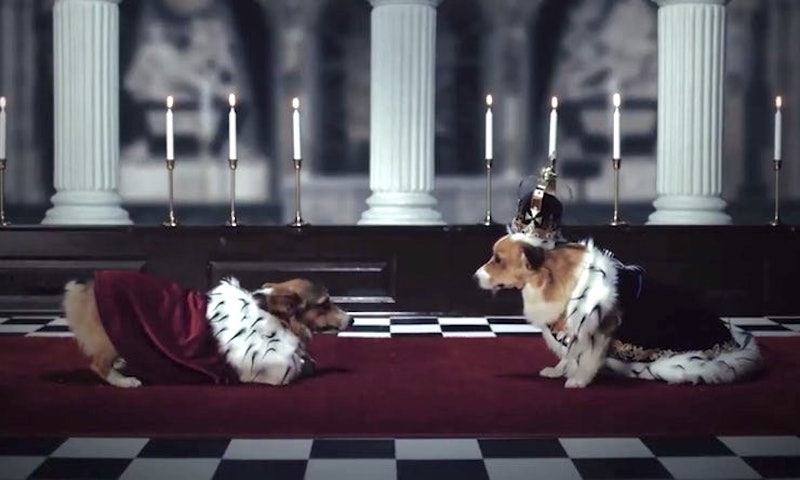 If you thought nothing could possibly make The Crown more captivating than it already is, then you clearly never considered adding dogs to the mix. Netflix UK recreated The Crown with corgis on Twitter, and the royal dogs are total scene-stealers. In the all too brief clip, the pups step into the roles of Queen Elizabeth II and Prince Philip during the intense Season 1 scene when Elizabeth commands her husband to kneel before his queen. And they totally nail it. Seriously, someone needs to put these corgis on contract ASAP.

A word of warning, this glorious moment of royal dog goodness will make you long for a full corgi production of The Crown. It's just that good. Sadly, Netflix tweeted, "We'd love to make an all-corgi version of @TheCrownNetflix, but they're massive divas." Surely, you could ply them with treats and belly rubs though, Netflix? The world needs more corgis dressed in robes and wearing crowns.

For now, you can bask in this one flawless scene of corgi Crown perfection. No one's knocking the show's brilliant stars, Claire Foy and Matt Smith, but it's just a fact of life that dogs make everything better — a truth than anyone who grew up watching Wishbone can attest to.

The corgi who takes on the role of Queen Elizabeth II gives an excellent stern face, but you have to give it up for Prince Philip's corgi counterpart. The moment he bows? Chills. He even gives a flawlessly timed whimper. Is it too late to nominate this pup for an Emmy alongside his other deserving The Crown co-stars?

Divas or not, these corgis are total charmers, and while they won't be replacing Foy and Smith anytime soon, everyone keep their fingers crossed for some onscreen puppy drama in The Crown Season 2. It would be a shame to see such talent go to waste.