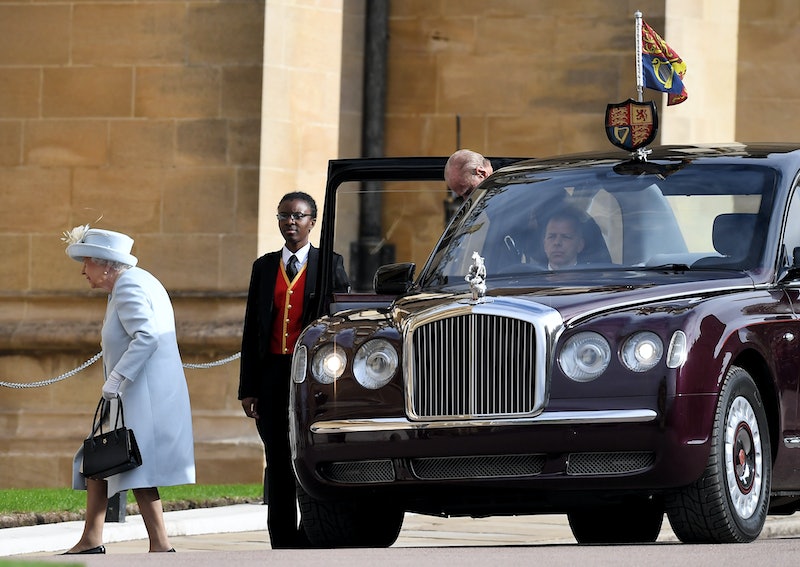 The Queen has been to many a royal wedding but today's spectacle was the second time she has seen one of her grandchildren marry in a year. Seeing as the monarch is the only person allowed to stand out more than the bride herself, all eyes turned to the 92-year-old's outfit. Not to disappoint, the Queen wore Angela Kelly to Princess Eugenie's wedding as she appeared in public with Prince Philip, who has formally retired from royal duty.

In the documentary, The Queen at 90, the monarch's daughter-in-law Sophie, Countess of Wessex spoke of the royal's need to wear bright colours at public events: "She needs to stand out for people to be able to say, 'I saw the Queen.' Don't forget that when she turns up somewhere, the crowds are two, three, four, 10, 15 deep, and someone wants to be able to say they saw a bit of the Queen's hat as she went past."

Therefore, dreary colours typically won't do. It's perhaps why the Queen chose a bold lime green look for Prince Harry, Duke of Sussex and Meghan Markle, Duchess of Sussex's wedding back in May. She paired her floral dress and green Stuart Parvin coat with a matching hat by Angela Kelly accessorised with stand-out purple feathers, handmade lace crystals, and pearls. Lemon yellow was the colour of the day for the 2011 wedding of Prince William, Duke of Cambridge and Catherine, Duchess of Cambridge. However, given Eugenie's wedding was a private event, it would seem the monarch opted for a more subtle look on the day, wearing duck egg blue in a subtle shade.

If one thing was guaranteed for today, it was that the Queen wouldn't repeat her green ensemble. In fact, betting agency Ladbrokes predicted she would arrive in a bold pink look. As the Mirror reports, the next most likely colours were blue and orange followed by purple. It turns out those predictions all went awry because the Queen loves to keep us guessing.

One way she did follow tradition, is the monarch tends to stick to a block-coloured outfit, normally opting for a dress (either plain or printed) covered up by a matching tailored coat and hat. She also often wears gloves. Some think it's so she doesn't contract germs from other people but the creative director of the Queen's preferred glove brand Cornelia James said it's more a case of keeping her hands clean. "I imagine she always has two or three pairs in her handbag to spare," Genevieve James told Reader's Digest.

It's easy to predict the finishing touch to any of the Queen's outfits too: a pair of sensible 2.25 inch heels (that have probably been worn in by a poor member of staff, reports the Express) and a sturdy leather handbag with a handle big enough to facilitate endless handshaking. Today she also accessorised her look with the Cullinan V Brooch. The Royal Collection Trust reports the brooch was "originally worn by Queen Mary as part of the suite of jewellery made for the Delhi Durbar in 1911." As usual, the Queen looked totally resplendent, and proved why she's the fashion icon that she is.