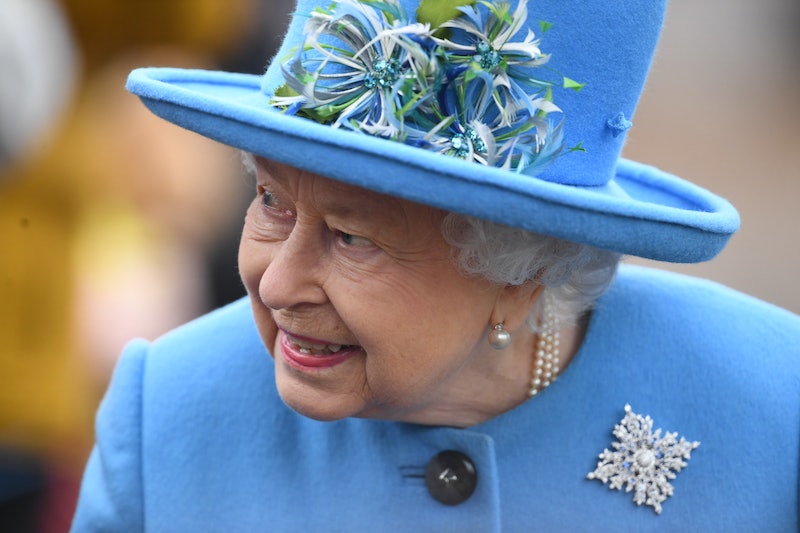 Queen Elizabeth keeps royal watchers guessing — especially when it comes to her style. It's widely believed that the monarch uses her sartorial choices to send hidden messages. Her outfits can carry a deeper meaning about everything from her stance on current issues to her opinion about other world leaders. Currently, some are viewing the Queen's snowflake brooch as a show of support for Prince Harry and Meghan Markle's decision to step back from royal life.

On Sunday, the Queen attended morning church services at Sandringham wearing the brooch. According to InStyle, the standout piece of jewelry was a gift from former Canadian Governor-General David Johnson. Given the accessory's origin, it could be a nod to Prince Harry and Meghan Markle, who are reportedly making Canada one of their part time residences.

The Queen affixed the snowflake brooch to a soft cerulean coat dress, and finished her look with a matching hat featuring blue and green floral appliqué. The white brooch stood out against a sea of blue, which could mean that the Queen wanted to bring attention to her accessory, and perhaps, the significance behind it.

The brooch is not the only time Queen Elizabeth used style as a means of supporting Prince Harry and Meghan Markle. Shortly after the Sussexes' announcement, Queen Elizabeth wore an all-camel look to church service. Her dress was a marked departure from her typically bold color palette. It did, however, echo the brown monochromatic Massimo Dutti ensemble Markle had worn only a few days prior.

One can make the argument that her brooch is just a simple accessory, devoid of deeper meaning. But according to the Queen's stylist, Angela Kelly, that's rarely the case. In her memoir The Other Side of the Coin, Kelly explained that the Queen's ensembles are planned months in advance, and things are rarely accidental.

Given that the Queen is usually intentional about her fashion choices and the meaning behind them, her Canadian snowflake brooch is rife for speculation.