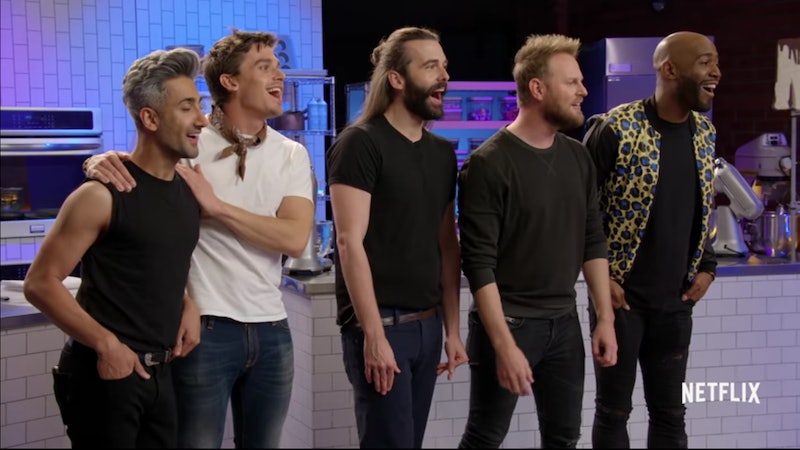 We stan a legendary crossover. By now, you’ve probably already cried your way through the second season of Queer Eye. So if you need some more Fab Five energy, fear not, because they make an appearance on another Netflix show — Nailed It!, hosted by the absolutely hilarious Nicole Byer, a self-proclaimed Queer Eye groupie. Can you believe? The Queer Eye/ Nailed It! episode is a perfect crossover of two of Netflix’s best original shows. In Season 2's bonus mini-episode, Karamo Brown, Jonathan Van Ness, Bobby Berk, Tan France, and Antoni Porowski make a mess in the kitchen to Byer’s delight. (And guess who doesn’t actually cook anything in this episode either?)

If you haven’t watched Nailed It!, please do. The premise is amateur (aka pretty awful) home bakers trying to recreate elaborate creations with…. mixed results, usually ending in pastry disasters. Byer provides the funniest running commentary and has a super sweet rapport with her fellow judge, french pastry chef Jacques Torres. And even though the bakers’ end results are usually hilariously hideous, the judges are so nice about it, telling everyone they’re proud they tried and they did their best. Even when their best is a lumpy goopy mess of frosting, fondant, and food coloring.

The Fab Five are ready to take on the challenge — at least at first. Their task is to recreate adorable cupcake and fondant versions of themselves, each taking a sculpture of another member of the group. All except for Mr. Food and Wine expert himself, Antoni Porowski. That’s right: Antoni, who is suspected of not actually being able to cook after much examination of each Queer Eye episode — he loves an avocado and a vegetable grilled indoors — does not participate in the baking challenge. Byer is a great comedian so she and the Nailed it! Team are probably in on the joke. But if they’re not, it’s even better.

As for the now-Fab Four, their skills in the kitchen vary. Tan is apparently the only one who actually cooks at home, and says he loves to bake. He's very confident he can win. Bobby says that he “hasn’t baked in decades,” and according to Antoni, Karamo has a "sophisticated palate of Coca-Cola and Welch's gummies for breakfast." Karamo admits he's scared. Jonathan, who's always the picture of optimism and believing in yourself, says his strategy is to "just be present in this competition." He's very zen. Very focused. Antoni calls him an unpaid sponsor of Postmates, which probably means that soon enough he will become a paid sponsor of Postmates.

And even though Antoni says walking into the Nailed It! kitchen is like a cook's dream, he does not get his hands dirty, instead guest-judging with Byer and Torres. He does, however, pronounce "fondant" the fancy French way.

No spoilers on who does the best and the worst, but there are many meltdowns in the kitchen. Karamo, Tan, Bobby, and Jonathan are experts on Queer Eye, so seeing them have very little idea what they're doing in the kitchen is so cute. They might be perfectly groomed, but they're human too. The best part, really, is Byer's rapport with the Fab Five. They get along just swell and you'd think they'd been friends forever. At one point, Karamo gets a little overwhelmed, and Byer tells him, "Do it for the culture." She's a great motivator. Maybe this means she will join the Fab Five for another crossover on Season 3 of Queer Eye? Here's hoping.

The four bakers turn out some cupcake and fondant creations with mixed results, but they all have a fabulous time. The winner of the four actually didn't do so bad — but he has nothing on the all-time best bake in the show's history: the Trump cake.