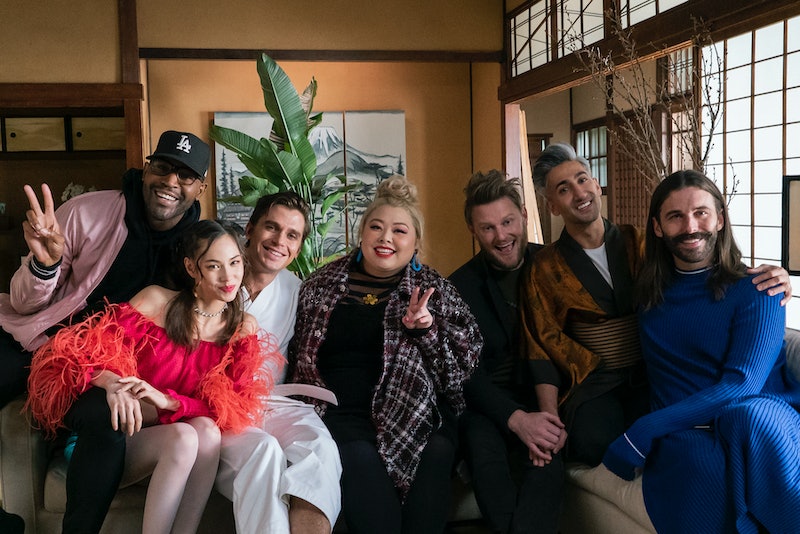 November is all about showing gratitude, so go ahead and start prepping your thank you note to Netflix now. On Thursday, Sept. 5, Netflix revealed that Queer Eye: We're in Japan will premiere on Nov. 1, but they didn't stop there. The streamer also shared a teaser that offers up a glimpse at what the Fab Five will be up to on their global adventure.

In the first teaser, Mizuhara sends out a text telling the Fab Five that Japan needs them, and they quickly respond like life-affirming superheroes. Soon, they're making plans to hop on a plane to bring their talents for helping out everyday heroes to a whole new country. A second teaser shared on the official Netflix Twitter account shows the actor welcoming the guys to Japan, but so far, Netflix isn't sharing who these heroes are, but if they're half as iconic as William and Shannan, then viewers are in for a good — and emotional — time.

The Fab Five's journey to Japan comes just a few months after Queer Eye Season 4's July premiere on Netflix. And after they return from helping four Japanese heroes become their best selves, the guys will be heading to a new town in America for Season 5 in 2020. The streamer previously revealed that Philadelphia will be the latest city to be treated to make-betters (the show's term for makeovers) from Porowski, Berk, Van Ness, Brown, and France. Previously, the guys have helped people in Atlanta and Kansas City.

Being able to bring their positive impact not only to cities in the United States, but also around the world is a dream come true for the quintet. During a June interview with Deadline, Porowski shared why being able to do the show in Japan was so rewarding. "We'd long had talked about wanting to do this in other countries and other spaces, but it proved that what we do, we can do it anywhere," he shared with the outlet. "Anybody can do it, and we hope that that shows as an example to not only LGBTQ youths, but also our allies, that that message of kindness is something we can all benefit from."

Porowski also revealed that something special happened as a result of needing a translator for the new season. He explained:

"Honestly, going in, I thought it was going to be a real challenge with the language barrier. We had a translator, which definitely made our job as hosts a lot easier, but what was really touching was that there was the lag in which the translator would basically switch from Japanese to English or vice versa, and you could see what we were saying hit our heroes. It had a slightly delayed reaction, but it forced that connection to really hit hard—and again, it was just a testament to the universality of this show, and the message that we try to carry forth in every single episode."

With the Queer Eye: We're in Japan! premiere just around the corner, it won't be long before viewers can see the Fab Five's experience for themselves. And it already sounds like this special season is going to give fans plenty of reasons to be grateful for this inspirational series.