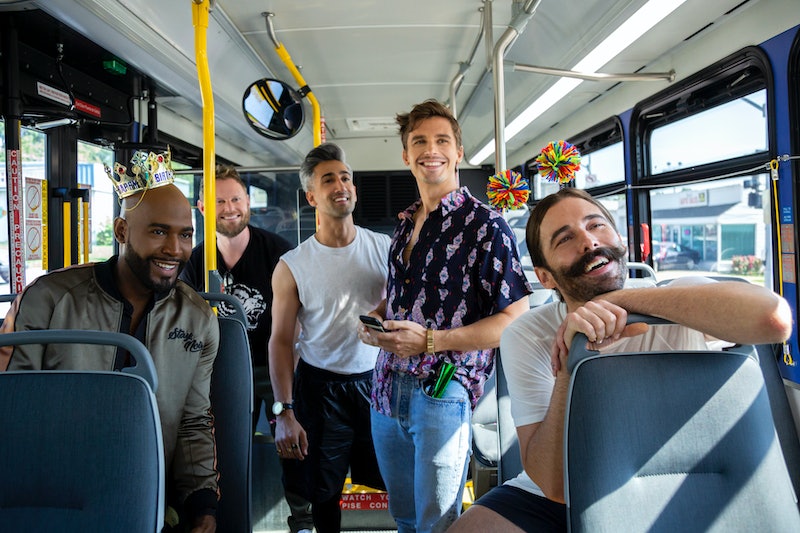 If you marathon all eight new Queer Eye Season 3 episodes over the weekend, you'll be happy to know that more episodes are coming so soon. The Queer Eye season filmed in Japan is set to premiere later this year according to The Wrap. There's no date set in stone yet, but it's encouraging to hear that it will at least be out sometime in 2019. And there's already a lot to look forward to with these four new episodes.

The Netflix synopsis for Queer Eye: We're In Japan! reads, "The Fab Five bring their message of self-care and compassion to four Japanese men and women while exploring the country's rich culture and cuisine." A Netflix press release added that the cast will be working with local stars as well for the four episodes.

One of these newbies to the series is Kiko Mizuhara a model who lives in Japan and is rumored to be dating Harry Styles. Tan France introduced Mizuhara to his Instagram audience while filming in Japan.

"The newest addition to the Fab5 crew, for our Japan episodes...the loveliest @i_am_kiko. Just wait until you get to know her. You are going to FALL. IN. LOVE!" he wrote alongside a selfie of the two of them.

Japan's SoraNews also posted a roundup of the group's Instagrams while they were in the country. The posts offer other sneak peeks at what viewers might be expect from the special series.

"While y’all were watching the Grammys I was discovering the Tokyo subway system, from the future. She displays an incredible cleanliness and with empty trains. NYC like wow. Can we even?" he captioned this shot.

"To clarify, this is NOT my new style," Tan wrote in his caption. "This was for a playful Harajuku scene for the show, to match with a cute Harajuku couple we were shooting with."

He also ate a lot of Japanese cuisine, of course, and stumbled upon a neon avocado sign on the street.

Karamo Chilled In A Cool Hat In Tokyo

Bobby Took In The Architecture

Netflix Japan also posted a photo of the Fab Five dancing it out on the streets with Mizuhara. It looks like fans have a fun, fabulous mini-season to look forward to.

And Netflix is thrilled to take fans abroad. "In just a year since we launched Season 1, Queer Eye has become a global phenomenon once again and the Fab Five are truly the ambassadors of self-care and compassion that the world needs now more than ever," Queer Eye creator and executive producer David Collins said in a statement. "Filming in Japan is a wonderful opportunity for us to work with four deserving heroes that will help showcase the incredible traditions and customs of their country."

Jonathan was just as grateful for the opportunity, posting a touching message to the country at the end of filming. "Thanks for being the most welcoming place Japan. We wrapped shooting @queereye Japan today and I’m just in awe of your people, our crew, and our heroes. I love you."

The group indicated through their Instagram posts that the series was filmed in late January through mid February, so production is now complete. As soon as post-production is complete, fans could be seeing brand new episodes on the streaming site. Not for nothing, but the special Australian episode of the series launched just six days after Season 2 came out. Perhaps this series will have a similarly close release to Season 3? A fan can dream.