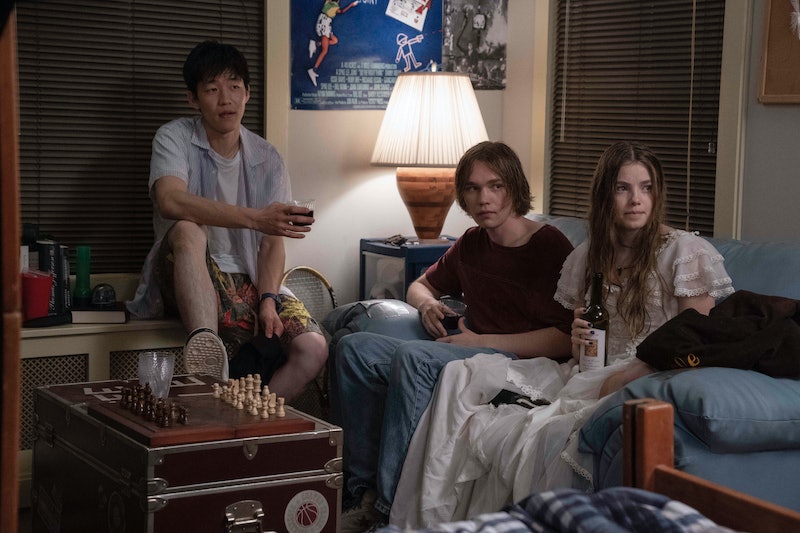 Spoilers ahead for Looking For Alaska episodes 1-5. Despite the clear implication that something tragic is looming on the horizon, the major conflict in the first few episodes of Looking For Alaska is a seemingly harmless prank war. The students of Culver Creek are hell-bent on figuring out who the "rat" is that's snitching on everyone and getting them in trouble with the school principal, and it turns out to be the person everyone least expected.

Realistically, it's the fault of the kids committing these pranks — including Miles, Chip, and Takumi — that they wind up with some serious consequences. But that's not how Miles' friends or the group they're caught in a prank war with — the Weekday Warriors — see it. After one person from each crew gets expelled, accusations of being a rat start getting thrown around, and the stakes of the prank war escalate from being about an innocent rivalry to being about revenge.

The Weekday Warriors are convinced that one of Miles' friends is the rat, but Chip is insistent that no one in his friend group — of which he has asserted himself as unofficial leader — would dare tattle. He then ends up with a great deal of egg on his face when it's revealed that the rat was none other than Alaska, who told on the others in order to keep herself from getting in trouble.

The revelation that Alaska is the rat brings forth the end of what was a fairly idyllic time at Culver Creek Prep for Miles. Suddenly, the friend group that accepted him as one of their own has been split wide open. Further, no one seems to be extending empathy to Alaska for the fact that she was forced into the role of "rat" by Mr. Starnes, who used her to get information leading to her friends' expulsion. Even Chip's mother finds the entire thing ridiculous, insisting that Chip is being absurd by not repairing his friendship with Alaska and that there are much worse things someone could be in the world than a "rat."

While the the group is eventually able to mend fences, the brief fissure in their relationship proves to be a lesson in forgiveness and friendship. Chip may have once held the belief that there was nothing in the world more important than not being a rat, but he learns that that isn't nearly as powerful or effective as Alaska's friendship. As the group is rebuilding, however, the accident teased in the show's opening scene looms closer, suggesting that the friends are in for a much greater challenge later on.