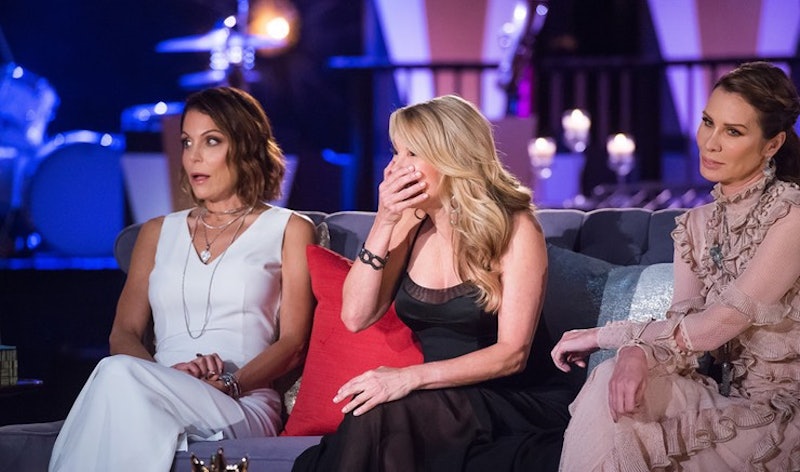 I know it's right there in the name, but if you ever need a reminder that reality television is in fact real, then look no further than the Real Housewives of New York Season 9 trailer. It becomes clear about halfway through the clip that it was filmed much earlier than its Monday release, specifically right around November 2016. Maybe you've heard of it? It was when a large portion of our country was blindsided by the election of Donald Trump to the highest office in the land. If you were one of those who weren't expecting the election's outcome, the trailer serves as a reminder that you are far from alone; the New York Housewives are visibly devastated by the result, too.

It's made even more painful by the juxtaposition of a few tragically optimistic scenes, like Carole Radziwill telling returning Housewife Bethenny Frankel that Hillary Clinton is "gonna win in a landslide," and Bethenny telling her that she seriously needs to stop talking about it so much. And then, of course, comes the reality check, with the women feverishly checking their smartphones on Election Night itself. The awareness of what's happening slowly dawns, followed by shots of Housewives with red, puffy eyes that feel all too familiar.

We all lived it ourselves just a few short months ago, but watching history replay itself for the women of RHONY is a jarring reminder of just how real things are about to get for these Real Housewives.

After so many seasons devotedly following their exploits, I've gotten desensitized to a lot of the drama that unfolds in any given season. You know, like cheating rumors, traded insults, and snubbed invitations. That's why watching the cast go through the 2016 Election was all the more jarring.

Sure, no one throws a drink in anyone's face, but this drama somehow feels even more intense, probably due to a combination of watching the women endure something I experienced myself, and because it already feels so long ago that I can't remember a time before.

But if you like your reality TV a little less real and sadness-inducing, rest assured that there's still plenty in the trailer to interest you. There's still celebration and Pinot Grigio and cattiness, with a bit of streaking by Bethenny and a Housewife kiss thrown in for good measure. It's sure to be an exciting season, reflecting a whole range of emotions, both good and bad. And, hey, it doesn't get much realer than that. Tune in on Apr. 5 to watch it all go down.