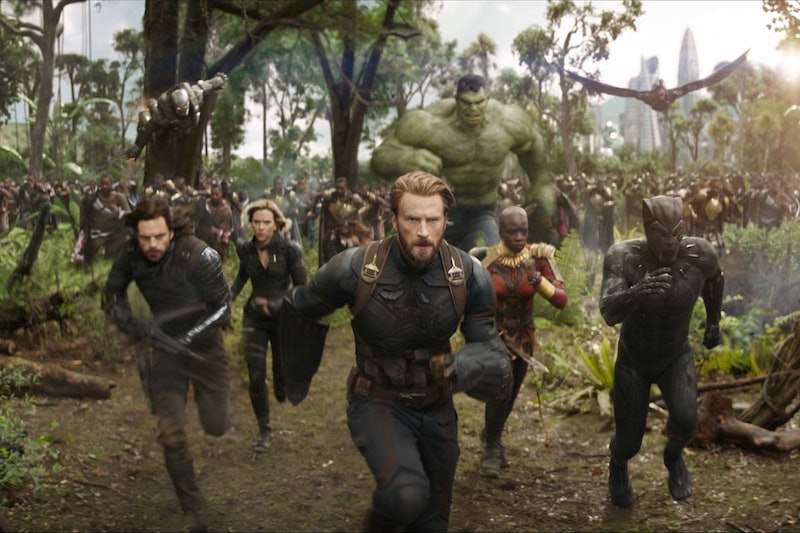 Major spoilers ahead for Avengers: Infinity War. Nobody knows how to do an action movie quite like Marvel, and the franchise has proven its might with that time and time again — from the archetypical action of the first Iron Man to the heist-like joy of Thor: Ragnarok. But the impact of Infinity War and the carnage it left behind had nothing to do with the action; in fact, in its core, Avengers: Infinity War is a love story.

This was no accident. Marvel hasn't just been building up to this from an action standpoint — they've very intentionally been building up the relationships between characters and saving the massive emotional payoffs for them in this film and the next. In fact, the entire movie hinges on these relationships waiting until now to reach an emotional fever pitch: every single "bad" or "wrong" decision made by a character in Infinity War is motivated by love.

We see it in the circuitous storyline with Gamora — Peter Quill agrees to kill Gamora out of his love for her; Gamora gives up the soul stone out of love for her sister; Thanos, shockingly, delivers the most emotional twist with the unexpected genuineness of his love for Gamora, who he sacrifices for the soul stone; and of course, Quill thwarts everyone from de-gloving Thanos in his grief.

We see it on Earth as well, with the Scarlet Witch refusing to give up on Vision (in a scenario that ultimately ends up destroying half of Wakanda to keep him alive — something I'm still blinking in confusion over, but okay); with the willingness of M'Baku to fight alongside T'Challa out of brotherly loyalty; with Tony's dream about having a kid that we can infer from callbacks later in the film ("Is this your ward?") is definitely meant to reference his mentorship of Peter Parker.

In weaving all these storylines together, the movie finds its greatest strength: its ability to highlight all kinds of love. The love between a parent and a child, the love between siblings, the love between friends and comrades, as well as the romantic love we're used to seeing played up in action movies. Infinity War is more a sweeping romance and a family drama than an action film; every pivotal moment in the film is grounded not in tactics or strategy, but in feelings.

But the follies these characters make in the name of love are, ultimately, hopeful ones. In a key moment of the film, Dr. Strange says that he sees over 14 million scenarios in how this mess pans out, and then delivers haunting news to our heroes: out of all of those scenarios, there is only one in which they succeed. Obviously Strange knows something everyone else doesn't, or he wouldn't have given up the stone to save Tony — a hugely important moment in that it was the only "bad" decision made in the film that wasn't motivated by love. So Strange must understand that the "one scenario" in which humanity succeeds won't be hindered by these bad decisions made out of love; it depends on them. It's just going to take two very messy, incredibly devastating movies to show us how.

And if you were paying attention, the film has already revealed to us, in the most heart-wrenching way, how these love stories will ultimately play out. I wrote earlier about how there was a major hint for how Avengers 4 will end hidden in Infinity War, and it has everything to do with the relationships they've built up here. "We don't trade lives," says Captain America — a line that Vision later parrots while saving him. But lives will be traded. In fact, we have every reason to believe that they will be specifically traded, one hero for another.

Think about it: every character who "died" is either a newer hero, or one that has yet to fulfill some kind of promise within the franchise. Peter Parker and T'Challa and the Guardians have sequels; Sam Wilson and Bucky are both rumored to take up the shield for Cap. But Infinity War set up this gorgeous, heart-wrenching dynamic that seems to indicate every character who "lived" through this round — namely, the OG Avengers — will die to take one of their places. In fact, they've already shown us how, in the way they reacted to the deaths. Bucky called out for Steve; Rhodey was looking for Sam; Peter Parker takes an inordinately long time to die just so we can be doubly sucker-punched with what he means to Tony. It's not too wild to assume Thor will lay himself down for Teen Groot, who saved him, or even that Nebula will attempt something to get Gamora back. The end of the film has left these relationships squarely in a place where one half is missing the other, or one legacy has a torch to pass on to someone else. The end of this film has guaranteed to us that all of the original Avengers will see their end in Avengers 4, and will do it to keep the next generation of heroes alive.

And that, my friends, is why Infinity War and Avengers 4 will ultimately have the depth and the meaning that fans deserve after ten years of waiting: they will not die heroes. They will die the same as you and I would, if it ever came down to it: for the people that they love.