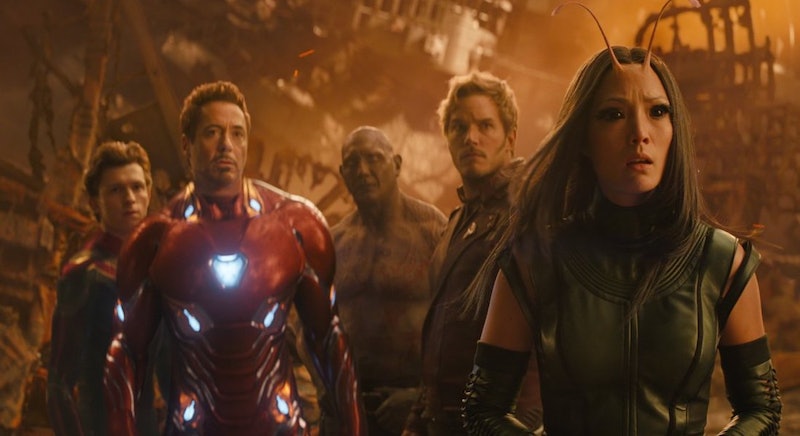 Major spoilers ahead for Avengers: Infinity War. Well, if you've managed to pick your heart up off the floor following the blood bath of our fave heroes, then you need to strap in for this Avengers 4 cast theory — namely, the way that the "We don't trade lives" line in Infinity War is going to come back in a big, bad, beautiful way. If you recall through your stream of post-movie tears, Steve Rogers first says it to Vision when he is considering sacrificing himself to prevent Thanos from getting the mind stone; in the end, we get another callback to it when Vision saves Cap's life after he was explicitly told to get out of the line of danger. Well, friends, I have reason to believe that not only are we going to get another callback to that line, but that it's going to be the central theme of the as-of-yet untitled Avengers 4.

First, let's take a look at the people Marvel chose to off at the end (one of which I predicted, thank you very much): Black Panther, the Guardians, Spider-Man, Scarlet Witch, Sam Wilson, and Bucky. Not only are these (obviously) major players, but most of them have sequels, so to some degree we know they're safe. But the other thing a lot of these characters have in common — namely, Black Panther, Spider-Man, and to some degree Sam Wilson and Bucky (both of whom are rumored to take up Cap's shield) — is that they may very well be the "next gen" of the Avengers. When we shift into another phase after this, they will very likely be the ones leading the charge.

That's why it's not coincidence that the people who lived through the fallout were primarily the OGs — like, what are the odds that every single one of the "original" Avengers would just so happen to not dematerialize? I'll tell ya why: they're all going to die in Avengers 4. And they're going to sacrifice themselves in a specific way that really is trading lives — in fact, I think each one of them is going to trade their lives to bring one of the newbies back, taking the line "We don't trade lives" full circle in the most heart-wrenching way.

We might have even gotten some foreshadow on who will trade their lives for whom: Peter dies in Tony's arms; Bucky immediately calls out to Steve; Rhodey is calling out to look for Sam. We even have some slight set up for Thor sacrificing himself for Teen Groot, who saved him with the axe. Each character seemed to have a specific counterpart whose "death" immediately hit them the hardest, or showed some implication that it would. When the time comes, I think that the trillions of lives that Thanos took will ultimately be restored, but conditions will be set to make that happen at a very specific price: namely, the OG Avengers trading their lives for their younger or newer comrades.

And honestly, as terrible as it is, it's a fitting way for them all to go. It probably means we're going to see next to nothing of the "dead" characters in Avengers 4 until the final act, but that gives the original Avengers some time to get a proper sendoff, and make the impacts of their deaths and their sacrifices fitting to the ten year journey that led up to it. It also forces them to come back together in a big way, to forgive what happened in Civil War and to get one big last epic fight scene with just the big name Avengers one last time.

TL;DR: Grab your tissues. Anyone who survived Infinity War is almost entirely doomed to die in Avengers 4 instead. Poetic cinema is such a pest.