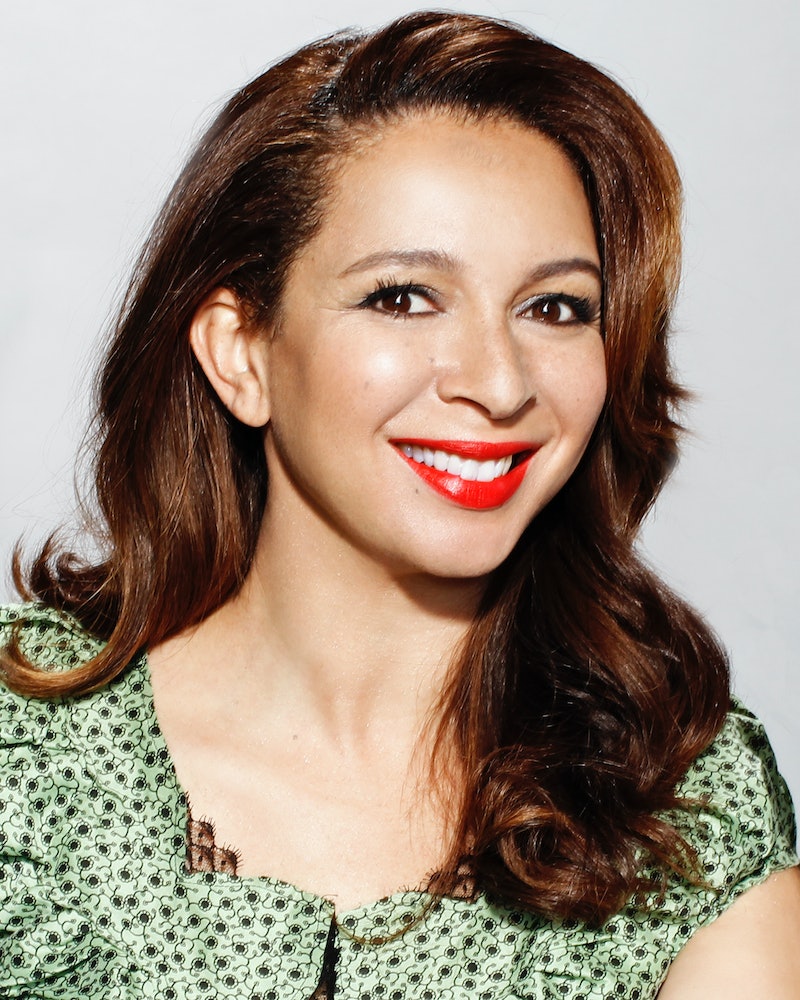 In May of 2014, Maya Rudolph joined Twitter — and over the course of the next four years, sent a grand total of 11 tweets out into the world. Unlike many of her comedian peers like Amy Schumer or Leslie Jones, Rudolph never grew to embrace the site, or most other forms of social media, for that matter; you're about as likely to see her on Snapchat as you are to see Kylie Jenner stop using it. But the star's decision to stay away from Twitter and other platforms isn't a flippant one — in fact, her reasoning makes a whole lot of sense for someone who's known for doing impressions on SNL and stealing scenes in movies like Bridesmaids.

"It felt like a lot of pressure to be funny," Rudolph, a star of July's The Emoji Movie, explains to Bustle via phone. "I think one of the hardest things about being funny for work is that people assume that you’re on all the time... I think people think you’re sort of a 24/7 joke spinner."

And besides, she adds, "when Twitter came around, it seemed to be a venue for people to be smart and quippy and funny and I felt like, why would I waste that on social media when I could use that in my work? Because it seems like if you’re gonna come up with a good joke, you should probably use it yourself."

Fair enough; while it'd be nice to have some Rudolph-created comedy in our Twitter feeds, it makes sense that she'd want to save her best lines for her own routines. Thankfully, there's plenty of comedy from the star to find elsewhere, from her recent appearances on Brooklyn Nine-Nine to her time co-hosting the variety show Maya & Marty to her current voice work for The Emoji Movie, out July 28. In the new film, Rudolph plays Smiler, a "homecoming queen" mixed with a "corporate greed, nutjob banana head," as the actor describes. The villain of the film, Smiler, even as an animated emoji, is a darker character than most of Rudolph's past roles, which took even the star by surprise.

"At first when you’re told you’re gonna be the villain, you’re like, f*ck," she says. "I wanted to be the hero — everyone wants to be the hero. But then you realize it’s such a huge compliment, because the villains are always delicious fun characters that get to do crazy stuff."

An avid emoji user herself (the "smiley face blowing a kiss" is a favorite), Rudolph took on the part mostly for her kids; the mother of four, including a toddler, she wanted to make a PG-rated movie they could actually see — not only for their enjoyment, but so they'd finally understand what she does for a living. "When I say I’m going to work, I usually say I’m going to work, so they don’t really know what that means half the time, the little ones," she explains. "I learned that lesson on Mother’s Day, because they always have little these things they fill out in preschool for Mother’s Day, like, 'what does your mom do, what’s her favorite things, what’s this?' And my 3-year-old got, 'where does your mommy work?' And she said, 'she works at work.'"

"They don’t know what the hell I do," Rudolph adds with a laugh. Hopefully, they will soon enough — so that even if they never come across their mom's jokes on Twitter or Instagram, they'll be able to find them on any (PG-rated) movie and TV screen they want.

More like this
Lauren Lyle Is Keeping The Contents Of Karen Pirie’s Bum Bag A Mystery
By El Hunt
On 'The Handmaid’s Tale,' Christine Ko Fights Back
By Gretchen Smail
The Fashion Blogger Behind "Christian Girl Autumn" Just Dropped A Clothing Line
By Allie Fasanella
Lashana Lynch’s 'Woman King' Training Was “Traumatizing” For A Relatable Reason
By Radhika Menon
Get Even More From Bustle — Sign Up For The Newsletter