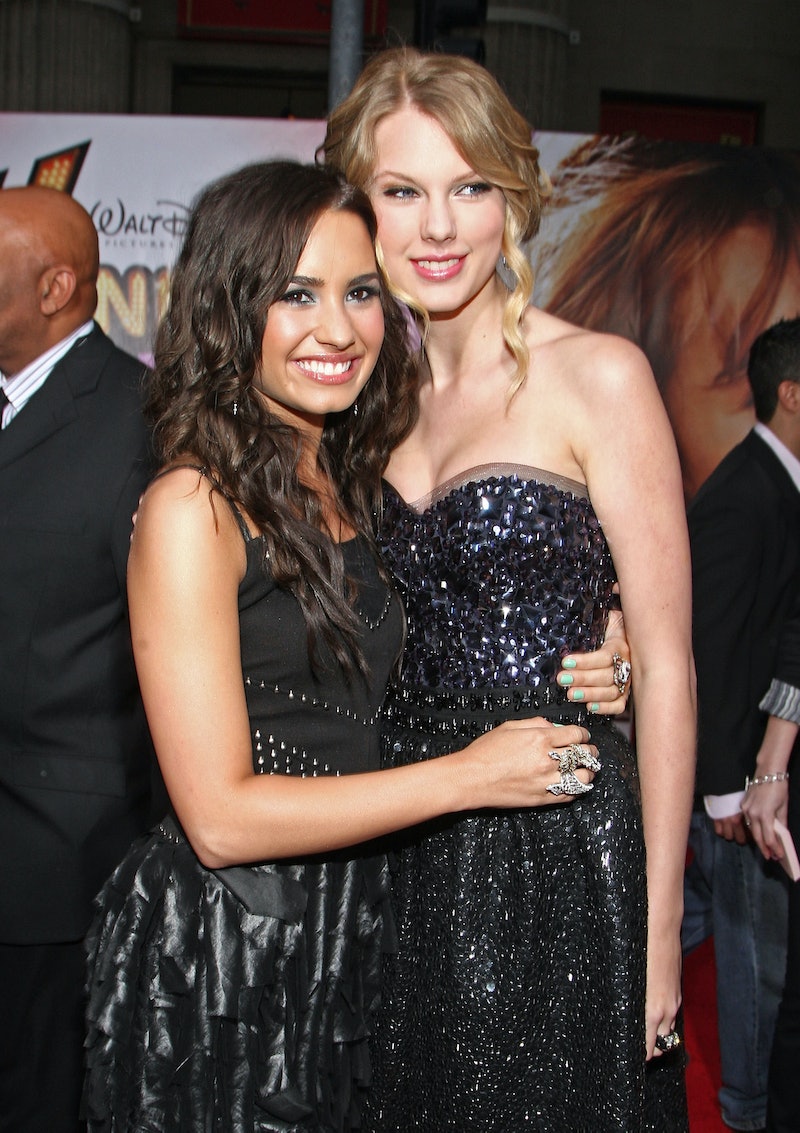 There were a lot of big names in attendance at the 2019 Video Music Awards. It was a major night for Taylor Swift, who performed and took home awards. Obviously, it's impossible for every single artist to be at one award show, but fans commented on Demi Lovato's absence. Demi Lovato denied skipping the VMA's because of Taylor Swift. She really shouldn't have had to do that, but there were a lot of social media who linked her absence to Swift's mega presence at the awards show.

According to Us Weekly, Swift was nominated for for twelve awards and ended up winning the Moon Person for Video of the Year. In contrast, Lovato had one nomination for a song she was featured on, which did not win an award. Yes, Lovato was nominated for Clean Bandit's song "Solo," but it wasn't her track and she wasn't set to present or perform. In the grand scheme of things, it wasn't exactly imperative for her to show up for the VMA's, no matter who was present.

Since Lovato defended Scooter Braun after he purchased Swift's masters, there was speculation that she skipped the award show in solidarity. One Twitter user harshly wrote, "Demi Lovato is watching Taylor winning on the VMAs while she's sitting at home throwing shade. That's it. She's disgusting and she wants attention. She's still a flop."

Unfortunately, there were a lot of tweets of this nature. No wonder Lovato chose to address her absence in a series of Instagram Stories on Aug. 26. She declared, "I skipped the VMA's for a REASON," which may have just induced more Swift-related speculation.

In a follow-up Story, she joked "Well that and I just hate award shows" and included a laughing face emoji.

The next day, she actually revealed the mysterious reason for not attending the VMA's. She told her followers, "I didn't 'shade' anyone last night. My REASON for not going is because I'm literally living my dream being on Will & Grace rn so stop reaching."

In retrospect, it probably would have behooved the singer to share this in her initial story instead of keeping it vague. Still, it was unfair for anyone to assume that she was absent for a very specific reason with no evidence. However, it's possible that she might not have been allowed to share the Will & Grace news because of stipulations in her contract.

In an Aug. 27 post on her Instagram page, Lovato verified her guest spot on the sitcom with a photo from the set.

It should have been exciting for Lovato to share the casting news, but instead it became entangled in the social media messiness, which kept going from fans of both singers.

Why does everything get labeled as shade these days? Conspiracy theorists need to take a break from reading into every little thing.

Some Swifties Think Lovato Has Something Against Swift

She didn't mention or allude to Swift in any of her Instagram Stories, yet this narrative continued.

Why can't someone achieve something without another artist being "jealous"?

Lovato is a busy person. She was working on something else and instead of celebrating that, she had to mention it to defend herself against some highly perpetuated false narrative.

Sure, Lovato and Swift are not best friends, but that doesn't mean people should just automatically assume they are "enemies." Instead, there should be stories focus on the women's professional endeavors: Swift's VMA's success and Lovato's Will & Grace appearance.