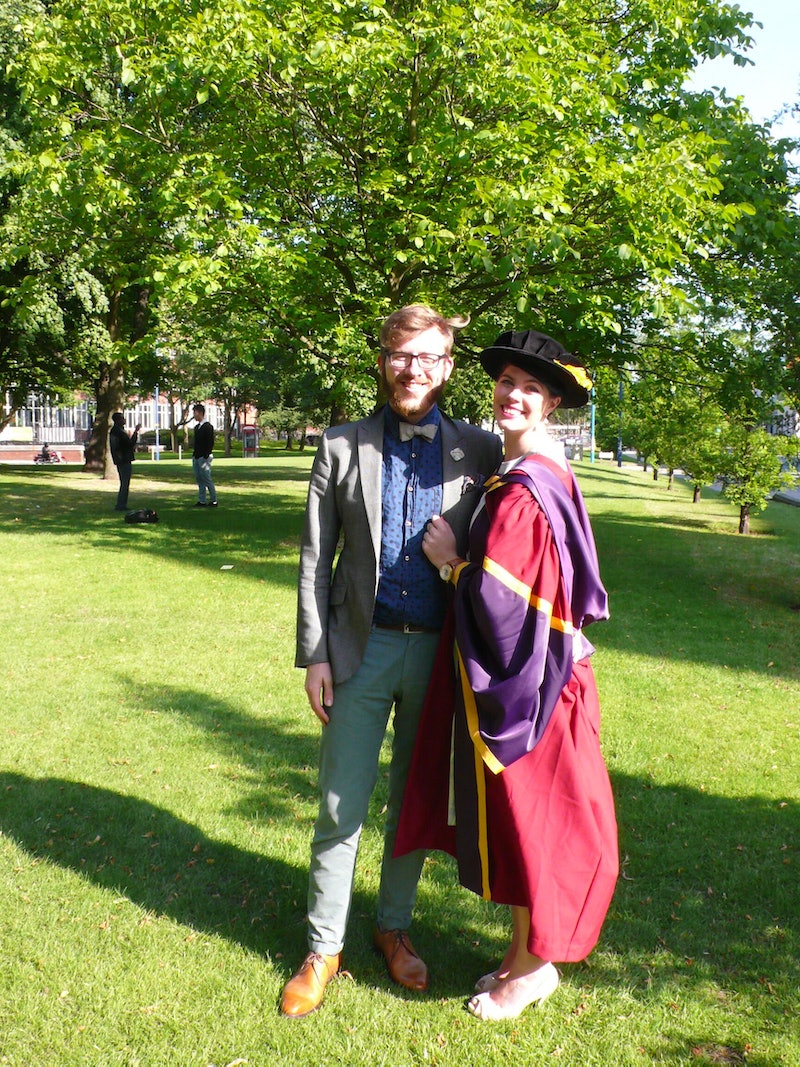 If you've earned a PhD, surely you should be proud of it. And yet for years after I was awarded my PhD in creative writing, I barely mentioned it. At my graduation ceremony in 2015, I was one of the only people in the room wearing the coveted red, gold, and purple gown that signified I'd earned a terminal degree. An undergraduate said "Ohhhhh" softly as I swept past, and told his family what the gown meant in hushed, impressed tones.

But after that, I didn't immediately start using "doctor" in my name — in fact, for a long time I didn't use it at all. Part of this had to do with a kind of imposter syndrome, a self-doubt that my PhD wasn't "really" a PhD. Is a doctorate in creative writing really a doctorate?, I asked myself. Spoiler alert: Yes, my PhD is a real, legitimate thing. Writing an 80,000-word novel and a 30,000-word related academic thesis in three years and passing with minor corrections? That's a major feat. And every "real" academic PhD I've ever talked to has been keen to make this point to me. I'd come out the other side and got the fancy gown to prove it. I was legit.

But for years, I didn't feel like it. If I put a "doctor" in front of my name, I thought, I'd be "pretending." And then I started to notice that other women — women whom I regarded as far more "legitimate" in their doctorates than I was — weren't doing it either. They were casually dismissing their own work, or saying they "didn't feel it was necessary" to use their title, or minimizing their PhD or DPhil when it was mentioned. Many of them were humanities doctorates, and said things like, "I don't want anybody on a plane to think I'm a medical doctor!" Their title would be on their CVs, but not anywhere else.

Then I started working in science journalism, and began to email professors, experts, and academics of all kinds, and I noticed something interesting. My response rates from women — female researchers, high-end academics, professors in charge of million-dollar labs — were far higher than those from men. So, like any intrigued scientific journalist, I conducted an informal experiment. I changed my email signature to include "Dr." alongside my name. And suddenly, the response rate from men shot up until they were nearly equal with women. To say this was frustrating is an understatement.

In June 2018, Dr. Fern Riddell, a cultural historian whose work focuses on sex, suffrage, and entertainment, publicly explained in a Tweet that she preferred to go by Dr. because, well, she'd earned her qualification. She then experienced hours, days, of trolling as men got all up in her mentions to criticize this decision: that she was being "arrogant," that she wasn't "actually an expert," that "women can't write good history," that claiming her qualification wasn't "attractive" and made her unappealing to men. The misogyny was staggering — but, to any academic woman who's spent time on the internet, not even slightly surprising. And this has happened to other female academics, too: The sexist trolling that was directed at University of Cambridge Professor Mary Beard, a world-renowned classicist, was so grotesque that it became an international scandal.

This is why using my well-earned "Dr." is a feminist act: because for men, it's an unwelcome challenge that women would present themselves as highly qualified — and require that they be addressed accordingly. Without Dr., the men I emailed rarely took me seriously. With it, people like Dr. Riddell (and, as her experience went viral, hundreds of others) encounter constant sexism that aims to tear the designation down. And as women, we internalize that idea: that we somehow haven't earned our qualifications, that we need to apologize or hide it to look modest. Women aren't allowed to claim our achievements, however well-deserved; it looks "rude."

Dr. Riddell's experience started a viral hashtag on Twitter called #ImmodestWomen, in which thousands of female academics and PhDs changed their own Twitter handles to reflect their expert status. It was a protest against being silenced and told to undersell themselves. Because being an educated woman with pride in her achievements is still, apparently, a thoroughly terrifying thing.

Women earned the majority of doctoral degrees at American universities from 2008 to 2016. There's not exactly a shortage of female PhDs in the world. But I can bet with some certainty that saying this will trigger a bunch of pushback — "Why does she care so much?" — from people who feel threatened by my asserting my expertise. It's pretty familiar to every other woman who's been in the same position. But the "Dr." is there, in my email and on Twitter, to make people take me seriously — and it works. Not because it's false authority, but because I am worth taking seriously.

More like this
It’s Official: 'The Bachelorette' Is No Longer A Fairy Tale
By Samantha Allen
The Best Time To Date After A Breakup, According To Experts
By Bustle Editors
Your Daily Horoscope For August 19, 2022
By Alexandria Lettman
Here’s How Mercury Retrograde September 2022 Will Affect Your Zodiac Sign
By Nina Kahn
Get Even More From Bustle — Sign Up For The Newsletter