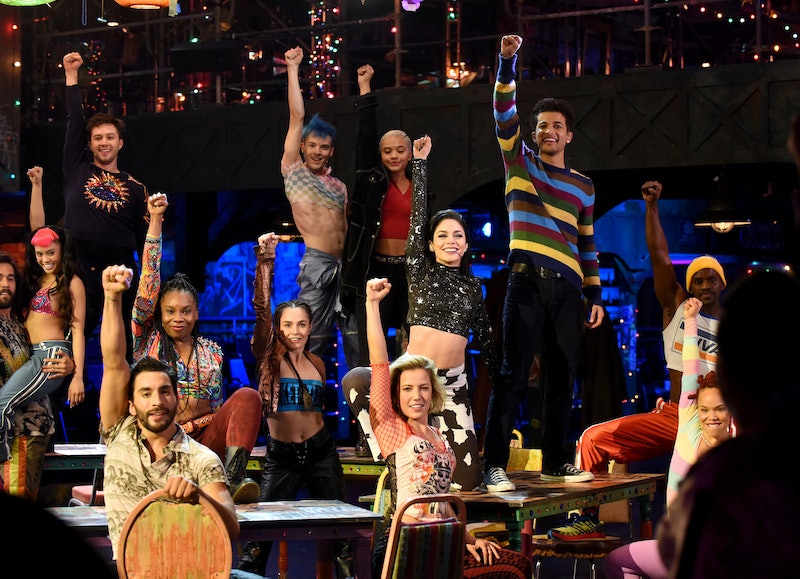 Picture this: a rowdy, post-show dinner at a local pub, lamenting the ways of the world. And then picture it driving out a local developer and embarrassing an investor, all to music! That's "La Vie Boheme" from Rent: Live. It's one of the show's most fun numbers, and the live Fox version certainly gave perfect credence to the original.

For those of you who don't know, "La Vie Boheme" is basically the "We Didn't Start The Fire" of Broadway musical songs. It's just a lot of things that were important in the 19th and 20th century set to music. If that doesn't sound fun, well, it is, because it's all about sticking it to the man and celebrating a more bohemian lifestyle than the yuppie sellouts who were invading the East Village at the time when "La Vie Boheme" was written. Over dinner at the Life Cafe (wine and beer, primarily, according to the song), the Rent cast pokes fun at authority, embraces their artistry, and makes no mistakes about their sexuality — remarkable for the time and on such a big stage.

Rent: Live kept the original show's legacy intact, albeit with some cuts for language and time. Though some of the lyric changes were questionable ("dildo" didn't make it, but "sodomy did), it was the first time the cast was all together on the stage interacting, and it was the first time that it seemed like they were having fun. Rent: Live suffered through technical issues (Fox's feed was having problems at the beginning) and the injury of a main cast member (Brennin Hunt, who plays Roger, broke his foot before the show), and "La Vie Boheme" was a time to let loose and have fun.

And speaking of having fun and being young, that was the reason for producers to finally bring Rent to the small screen. "Rent was written by this young man who believed in true love, standing for what you believed in [and] that art was more important than anything else — all of these things that at some point in our lives we all believed too," executive producer Adam Siegel told Variety. “For a young person it ignites that part of you, and for an older person it wakes up that part of you again, and that’s the most fun thing to put into people’s living rooms.”

Director Marc Platt echoed the same statement to Vanity Fair. “I think the idea of the authenticity of these characters comes from being very young when they first performed,” he said. “Jonathan was young. That’s one of the reasons I put together the original team of Michael Greif and Bernie Telsey. It was [as] if we were setting out like it was the first time making Rent."

The youth and vibrancy of the original Rent was certainly translated into the television (although censor-friendly) production of Rent: Live, and the cast and crew should be happy about bringing the show to a whole new audience.