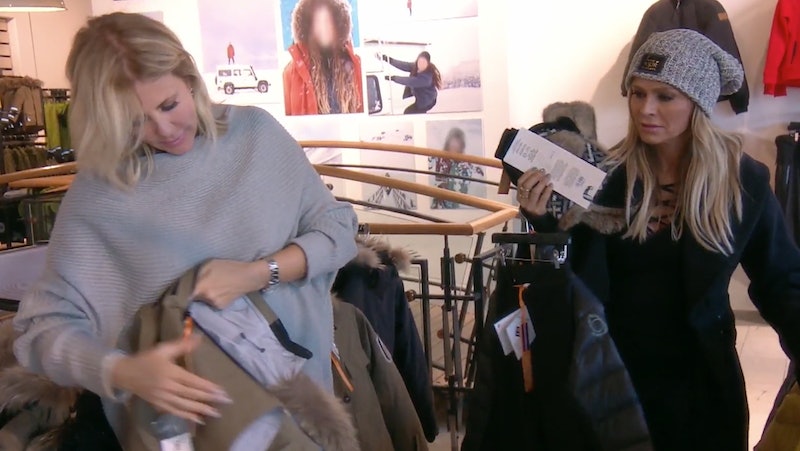 Like that warm, dense fog that hugs the restorative waters of the Blue Lagoon, the preview for The Real Housewives of Orange County cast's trip to Iceland is such a soothing piece of film. After last night's episode of RHOC, Bravo treated viewers to a sneak peek of what happens when Nobleman magazine ambassador Lydia McLaughlin touches down in Reykjavik with the rest of the show's main lineup. Holy Icelandic horse, the preview is so good (and available on Bravo's website).

Given how awkward their dynamic has been this year (to say the least), it’s a Bravo miracle that every member of the main cast agrees to get on the same plane and hang out in Reykjavik together like one big happy family. Shannon Beador and Tamra Judge will rub elbows with sworn enemy Vicki Gunvalson. Shannon and Peggy Sulahian will try to pal around like they didn't just scream at each other at Meghan King Edmonds' psychic shindig. Lydia and Shannon may hang out like two people who can actually stand one another. For, like, several days in a row. The ladies of RHOC Season 12 will finally be forced to spend a ton of quality time together, and it’s sure to be a beautiful, messy, and captivating thing.

At Nobleman’s one-year anniversary party, Meghan offered up the following morsel about the Season 12 outing to E! News:

“The unexpected happens the entire trip. Iceland is seriously cuckoo. I seriously think they could make 10 episodes out of it. I swear they could do an entire season out of Iceland."

This “seriously cuckoo” trip will descend upon Bravo next week, and the trailer is just the thing to hold fans over until then. While the preview doesn’t get into the “couple of battles, a couple of cries, a couple of yellings” that Peggy referenced at the aforementioned Nobleman get-together, there’s plenty of other Iceland trip moments to sink your teeth into. So grab your fermented shark fork and get ready to dig into the trailer for the RHOC Iceland adventure.

1. They Drive Next To Icelandic Horses

Icelandic horses are magical creatures and anyone who says otherwise is wrong. Here’s hoping the OC Housewives get to go riding if only because it’d be a joy to see them attempt to tromp around in those delightful orange onesies. (Please do yourself a favor and google “Iceland horse orange jumpsuit” at your earliest convenience.)

2. They Climb A Mountain Together

3. And It’s An Otherworldly Mountain

Seriously, would you look at that work of art by Mother Nature?

4. And It Seems Like A Nice Bonding Moment For The Cast

Not to get too saccharine, but it's always sweet to see the cast forget about their feuds for a short while and act like good friends.

5. Vicki & Tamra Have A Laugh While Shopping

Tamra and Vicki have a moment when Vicki fails to pull a jacket over her head. Vicki looks like she’s using the jacket to wipe her face, Tamra cracks up, and it’s almost as if these two never stopped being best friends. And then, the camera pans over to Shannon standing by another rack, visibly chilled to the bone.

No one else does. Eager to find out the reason why.

7. Lydia Throws A Stack Of Menus At Shannon & Tamra

And this happens while Shannon and Tamra are still wearing those hats.

When Lydia storms off after chucking menus across the table, Vicki appears to stay with her current adversaries Tamra and Shannon. There could very well be an alliance shift in our midst. Who knows how long this maybe-reconciliation between Vicki and Shamra lasts, but it’s something.

Do those cylindrical couches roll when sat on? Can't wait to find out.

Does it get more luxe than a spaceship bathtub flanked by penguins?

As any true RHOC fan knows, Vicki dry heaving has been one of the show’s recurring, ahem, gags. Glad that this moment from the Iceland trip will surely be part of the “something made Vicki retch” clip montage from here on out.

Before next Monday's episode airs, you may want to procure an orange horse onesie. This RHOC excursion sure looks like a thrilling ride, and it's always a solid idea to dress for the occasion at hand.

More like this
Everything To Know About A Potential 'RHODubai' Season 2
By Kadin Burnett and Brad Witter
Andy Cohen Apologized To Larsa Pippen After A 'RHOM' Season 5 Reunion Dust-Up
By Brad Witter
'RHOP' Stars Robyn & Juan Reportedly Got Remarried & Filmed The Ceremony
By Brad Witter
'RHOSLC’s Heather & Whitney Are Still On A “Friendship Break” After Season 3 Reunion
By Jake Viswanath
Get Even More From Bustle — Sign Up For The Newsletter
From hair trends to relationship advice, our daily newsletter has everything you need to sound like a person who’s on TikTok, even if you aren’t.