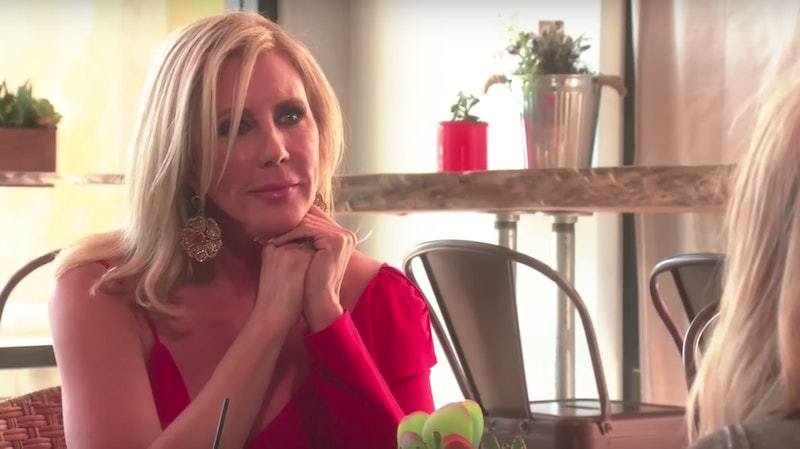 Monday, Oct. 9’s episode of The Real Housewives of Orange County finally gave Lydia McLaughlin the one-on-one meeting she’d been waiting for: For a whole few minutes, best friends-turned-enemies Vicki Gunvalson and Tamra Judge had a conversation. Yes, after barely interacting with each other for over 13 episodes, the two titans of Orange County got together for a lunch to air out their grievances. Those looking for an update about Vicki and Tamra’s friendship saw the pair didn’t make up at lunch, and, judging from their present-day reactions to this scene, it seems like the duo won't be making up anytime soon. ...Or won't they?

Last season, Tamra and Vicki started to rebuild the bridge to their friendship after it was all but demolished by the Brooks Ayers fiasco. At the Glen Ivy Hot Springs, the dairy in Ireland, and the sand dunes, things appeared to be looking up for the twosome; their bond truly seemed to be able to withstand anything. But then, Vicki repeated some rumors about Tamra and Shannon Beador’s husbands. And then, Tamra, Shannon, and some of the other O.C. Housewives decided they were really done with Vicki. And then, Tamra gave Vicki a T-shirt with the words "Charge: Lying" under her "mugshot." And once again, Vicki found herself estranged from most of the cast, including her on-again, off-again best friend, Tamra.

What was once an inseparable, indomitable, and incredible reality TV duo is now a pair of enemies who can barely stand to be in the same room. Sure, Vicki and Tamra will both go to Meghan King Edmonds' sip and see. And yes, both will go to Kelly Dodd's breast reduction party and take part in a group screaming match. But whoop it up together like it’s 2013? No, ma'am.

In a recent interview with Bravo’s The Daily Dish, Vicki said the following about her sit-down with Tamra:

"She came in with the attitude that she really didn't want to be there, and that hurt my feelings because I was really coming from a place where I was gonna ask her for forgiveness, I really wanted to move on.”

The scene went on for only a few minutes, but Monday Tamra tweeted Monday evening that their conversation actually lasted an hour — an. hour.

As messy as this meeting was, Vicki has not given up on her friendship with Tamra. She explained,

"I'm always hopeful because what did I do? I just know I have to see her, she lives around me, and we socialize with the same people, and she needs to really look at the big picture, like was it really that bad? This conversation that I had with Kelly [Dodd regarding rumors about her husband Eddie Judge], was it really that bad? It really wasn't."

Tamra says that while she would like to put their drama behind her, that's something that's easier said than done. As she writes in her BravoTV.com blog, “Let’s be honest: it’s hard to forgive someone when they keep hurting you. It’s even harder when that person has NO remorse for what they're doing.” Tamra adds that while she has forgiven Vicki, she’s not forgetting.

After going back and forth about some of the issues that tore their friendship apart, Tamra excused herself from the table before she, as she explains in the blog, “lost it.” And lest anyone think this was the beginning of a reconciliation, Tamra makes it clear that she isn’t interested in opening that door again. She says,

“She’s proved to me that she’s incapable of being a good person and doing the right thing. She doesn’t deserve my friendship. I believe that the friendships you keep are a reflection of who you are. She's not a good friend, and I’m starting to question if she ever was.”

Well, that "She doesn't deserve my friendship" line sounds fairly definitive, no? Alas, Vicki and Tamra’s friendship seems to be a relic from a bygone era, something fans can wax nostalgic about.

Wait a second. Please watch the trailer for the second half of the season.

Do you see that? Right around the 40-second mark? Uh, do Tamra and Vicki make up again, only to get in another fight? Their friendship truly is the tequila shot-soaked boomerang of the Real Housewives universe.