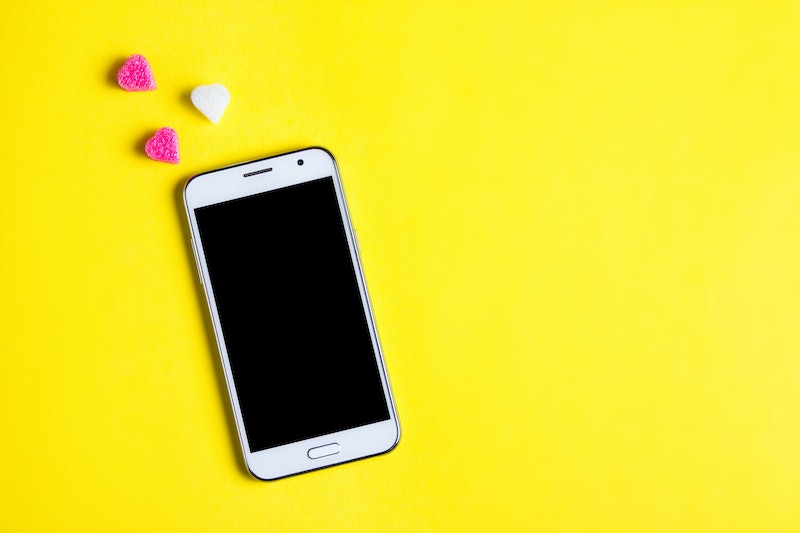 Each month, the Bustle Book Club asks an author to recommend a book they think everyone should read. In August, Christina Lauren, the duo behind a number of beloved romantic comedies, including The Unhoneymooners, out now, and Twice In A Blue Moon, out on Oct. 22, recommend The Right Swipe by Alisha Rai.

It's unsurprising that the rom-com genre has seen an uptick in books about love in the age of online dating. In a time when most people are typing, swiping, and scrolling to make a romantic connection, authors are putting their own spins on the relatable experience of being an app-using single person. Alisha Rai, author of Bustle's Book Club Pick, The Right Swipe, is the latest author to add a diverse rom-com to the growing list of tech-based love stories. Bustle's got an excerpt from the book below!

The Right Swipe follows Rhiannon Hunter, the super-successful creator of modern dating app, Crush. But she's far less adept at dating herself than she is at bringing other singles together. Just one look at her most recent hook-up — Samson Lima, ex-pro NFL player and a one-night stand who ghosted her — is proof of that. Rhiannon now prefers to focus on work instead of play. But then, Samson suddenly reappears in her life — as the spokesperson for a rival dating app. Now they both have to decide whether the possibility of love is worth the risk.

This smart and sexy rom-com will not only make the perfect end-of-summer read, it's also sure to have readers re-examining love, relationships, and of course, those pesky apps, and how they fit into our modern lives. The Right Swipe is out now, and you can start reading the book below:

'The Right Swipe' by Alisha Rai

Rhiannon Hunter worshipped at the altar of no man. Or woman, for that matter. She’d worked hard to carve out her own tiny empire where she was only accountable to herself and those she chose to be accountable to. It was a luxury and privilege she didn’t take lightly.

So it was extra annoying when she had to cajole anyone for anything. Wearing heels, no less.

Rhiannon flicked the button of her jacket open. Her modest cleavage in the crimson one-piece jumpsuit she was wearing had the bouncer’s gaze slipping away from his iPad. She cocked her hip, the better to accent her legs, the dratted heels at least giving her a nice optical illusion of length. “I got an invite,” she lied. “Can you please double- check? H-U-N-T-E-R.” She spoke in what was her closest guess of what a sweet, soft tone might sound like.

The large, muscle-bound guy dragged his eyes back to his tablet and, with a sigh, scrolled through the list again. The light from the hotel’s hallway reflected off his shaved head as he straightened. “Of course. Apologies, Ms. Hunter.

Here you are.” He stood aside and opened the door to the ballroom.

"Rhiannon Hunter worshipped at the altar of no man. Or woman, for that matter."

She gave him a regal nod and sailed inside like she belonged in truth, pulling her phone out of her pocket to send a quick text. I don’t know how you finagled that, but I’m in.

Her assistant, Lakshmi, responded immediately. Didn’t I tell you I’d handle it? And stop cursing your shoes. You only need to be in them for a little while.

Rhiannon’s lips curved. She could have worn her signature hoodie and Converse and not looked out of place during any other event this week— at a tech conference like CREATE, sweatshirts and sneakers mixed with silk and suits—but this particular party, an exclusive after-hours event, had specified a formal dress code.

She tucked her phone back into the roomy pocket of her jumpsuit and walked farther into the ballroom, snagging a glass of wine off a passing waiter’s tray.

The place was packed. A band played onstage, but most people were circulating, their voices pitched over the music. Austin might be a music lover’s city, but the majority of guests here tonight were conference attendees whose primary priority was to network and learn.

She surveyed the room with a critical eye. Formal wear was not her jam, and neither were stuffy hotel ballrooms, but Matchmaker had gone all out tonight. The company’s signature M was emblazoned on everything from the heart-shaped ice sculpture to the dark blue napkins.

There were countless dating apps and sites now, but most North American serial singles knew only three mattered.

Swype, the original left and right swipe-based dating app built around Hot-or-Not bro culture; Crush, Rhiannon’s pink and feminist response; and Matchmaker, that old-time behemoth website that had started back in the day when people wanted to spend days building their dating profile and had to scan their photos via a dedicated machine.

"There were countless dating apps and sites now, but most North American serial singles knew only three mattered."

Rhiannon had studied Matchmaker in college classes, had picked the business and its strategies apart when she’d entered the dating industry. Despite a recent slowdown, the Kostas sisters were legends of the dot-com world, having outlasted most of their contemporaries through recessions and technological change.

Rhiannon’s suspicion was most of that staying power had been fueled by the elder sister. Jennifer had died last year, reclusive and mysterious Annabelle had inherited everything, and the company now seemed to be in a holding pattern. Rhiannon was sure she wasn’t the only shark circling Matchmaker since its visionary had passed away. Gruesome, but that was business.

Unfortunately, all of Rhiannon’s standard and even more, um, stalky tactics to get to Annabelle had yielded zero fruit. Calls, letters, gourmet gift baskets, they’d all been returned or gone unanswered. In a moment of desperation, a few months ago she’d even traveled up the California coast to lie in wait near Annabelle’s vacation home with a half-baked plan to, oops, bump into her on the beach.

Don’t think about that trip.

Good idea, brain. Rhiannon took a sip of her wine and wrinkled her nose. She couldn’t tell if it was the vintage or the memory of that weekend that left a bad taste in her mouth.

Anyway, through some last-minute miracle, she and Annabelle were scheduled to be on a stage together tomorrow for a live interview, their meeting inevitable, so crashing this party wasn’t entirely necessary. But Rhiannon was too curious for her own good, and she wanted to get a sneak peek of the woman she’d been chasing. Plus, she wanted to see if there was a reason for her competitor to have poured out all this cash tonight for a fancy sponsored event.

"Rhiannon took a sip of her wine and wrinkled her nose. She couldn’t tell if it was the vintage or the memory of that weekend that left a bad taste in her mouth."

Someone jostled Rhiannon. She stood still, not giving way, and glanced over her shoulder, resting bitch face firmly in place. She never knew what kind of reception she might get from guests at these kinds of industry gatherings. The chill and poorly concealed snickers from years ago had mostly died down, but there was always some fool who wanted to test her.

The pretty blonde gave her a dismissive look, then did a double take, her eyes widening. “Are you Rhiannon Hunter?” she asked, her voice pitched to be heard over the band.

“So cool.” The woman stuck her hand out, gold charm bracelets jingling. “I downloaded Crush on my phone last week.”

Rhiannon relaxed and accepted her hand. “Good luck with it.” She meant that. Success stories were a dating app’s lifeblood. Love was an industry fueled by hope. Whether that hope was misplaced or not was a different question.

She could practically hear her head of marketing hissing in her ear. Maybe cool it on the cynicism when you’re talking to a potential paying subscriber.

“Thank you.” The woman’s nose wrinkled. “I’m not too optimistic. San Francisco is the worst city to be a heterosexual woman trying to date, I’m sure of it.”

Rhiannon bit her cheek. It was a running gag at the office, that line. Almost every single felt like they lived in the worst city to date in. In reality, it was . . . everywhere. Everywhere and everything was terrible and on fire and if you did meet someone you clicked with, you could chalk it up to pure timing and luck.

"Almost every single felt like they lived in the worst city to date in. In reality, it was . . . everywhere"

Rhiannon buried her personal weariness down deep and dug out a perky smile. Data was her friend, and she had a lot of it. “Actually, fun fact, by our internal numbers, San Francisco has a relatively higher ratio of heterosexual men to heterosexual women, so you might be in good shape.”

The subscriber brightened. “Really? That’s hopeful. Well, thanks. So far, I’ve definitely gotten less dick pics on Crush than I do on the other apps.”

“That’s not a bad legacy to have attached to my name, I guess,” Rhiannon murmured, as the woman waved and walked away.