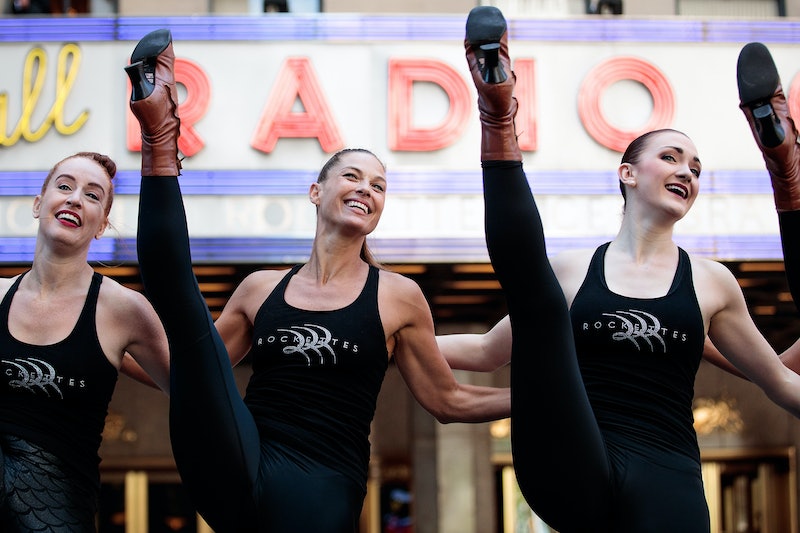 I've sat in front of my computer for the last ten minutes trying to think of a way to start this piece, but all I can think about is that I'm shaking. For the last year and a half of hearing Trump's sexist, racist rhetoric — and for the full 25 years of my human existence, enduring all there is to endure as a woman — there was one place I could always take comfort: the theater. Because out here in the real world, I may be objectified and harassed as a woman, I may worry about my LGBTQ and POC friends' safety, and I may have to fight to elevate my voice and the voices of others, but the theater is the one place I have always known that we are safe, and we are heard.

Like many, I felt championed by the patience and kindness of the Hamilton cast, who took an ugly encounter between Mike Pence and audience members and turned it into an educational, progressive opportunity to help foster change. I was proud of the community of people I belonged to, knowing that given the chance to be on that stage, they would have all done the same — but more than proud, I was finally afforded a shred of calm. I was finally assured in the wake of the chaos of this election that our safe space was still safe, and though there were many things Trump could take from us in the next four years, this was the one thing that would stay ours.

I'm angry at myself now. I should have known better to assume that anything was still safe.

By now you probably have heard that the Rockettes have been tapped to perform at Trump's inauguration in January. Shortly after CNN's Brooke Baldwin initially reported that they would perform on Dec. 22, the Madison Square Garden Company confirmed it in a press release, upon which a member of the Rockettes, dancer Phoebe Pearl, posted that a now-deleted Instagram message that same day, reading:

I usually don’t use social media to make a political stand but I feel overwhelmed with emotion. Finding out that it has been decided for us that Rockettes will be performing at the Presidential inauguration makes me feel embarrassed and disappointed. The women I work with are intelligent and are full of love and the decision of performing for a man that stands for everything we’re against is appalling. I am speaking for just myself but please know that after we found out this news, we have been performing with tears in our eyes and heavy hearts. We will not be forced! #notmypresident

On Dec. 23, an alleged email from the American Guild of Variety Artists, who represent the Rockettes, began circulating, prompting a statement from the Madison Square Garden Company to stress that participation was "voluntary". But if the email is real, it seemed to indicate that the performers who do not wish to perform at the inauguration — which dozens of celebrities have already declined to do, based on their morals and political leanings, without consequence — were allegedly led to believe that they would risk termination from their jobs, which MSG has denied. (Bustle has reached out to the American Guild of Variety Artists, Madison Square Garden Company, and Rockettes producers Jill DeForte and Larry Sedwick for comment, and will update upon reply.)

A statement has been released in the wake of this controversy by Rockettes' owner Madison Square Garden Company:

The Radio City Rockettes are proud to participate in the 58th Presidential Inaugural. For a Rockette to be considered for an event, they must voluntarily sign up and are never told they have to perform at a particular event, including the inaugural. It is always their choice. In fact, for the coming inauguration, we had more Rockettes request to participate than we have slots available. We eagerly await the inaugural celebrations.

However, this is a very harsh pivot away from an alleged email circulated to the Rockettes the day before. BroadwayWorld.com received transcript of an email allegedly sent by the American Guild of Variety Artists to the performers, who allegedly ruled a potential boycott "invalid". Toward the end, it allegedly reads:

This has nothing to do with anyone's political leanings (including AGVA's), it has to do with your best performance for your employer, period. I will reiterate that if Hillary Clinton was the President-elect, nothing would be different, and there would probably be those who would not want to be involved because of her. It is a job, and all of you should consider it an honor, no matter who is being sworn in. The election is over and this country will not survive if it remains divided.

Everyone is entitled to her own political beliefs, but there is no room for this in the workplace.

If you are not full time, you do not have to sign up to do this work. If you are full time, you are obligated. Doing the best performance to reflect an American Institution which has been here for over 90 years is your job. I hope this pulls into focus the bottom line on this work.

Let the whole of this sink in for a moment. Imagine yourself, a little girl, clutching to an impossible dream — to dance with the Rockettes. Imagine the grueling work that it took. The years of rejection, of labor that came without reward, of subjecting yourself to an art that many people fail to appreciate. The years of constant self-doubt, of wondering if you'd made a mistake in your choice; the small successes that punctuated months of nothing in between.

Then imagine yourself making it. Imagine that you are the impossible statistic; not only one of the 7.5 percent of employed dancers in the city of New York, but one of the ultimate. That you made your dreams come true.

Now imagine the threat of that all crumbling down because you don't support a man who has allegedly sexually assaulted women, and bragged about it on record; a man who plans to spend the next four years pushing legislation that take away your rights to your own body; a man who has hired a cabinet full of people who actively fight against legislation protecting LGBTQ and POC; a man who has incited unprecedented violence in the wake of his election, and done nothing to condemn it. A man who doesn't just threaten you, but every single person in the community you grew up in, and the people you love most.

The "political beliefs" that this alleged email refers to have never been "political". They are personal in the most personal way. Trump's beliefs will affect every one of these women, as well as their families and their friends. For many, to perform for this man would not just betray their political beliefs, but their very community and their sense of self — and for a community as diverse, accepting, and proud as the theater community, there is no target quite like the one Trump has on them.

You could easily replace those last three paragraphs of the alleged email with the very words that have become a soundtrack of misogynistic encounters women have over the course of their lives: "Just shut up and smile." If this alleged email is real, than this union, the very agency tasked with protecting these performers' rights and safety, actively vied against them. Yes, the backlash has inspired this statement from Madison Square Garden Company saying that the performance is voluntary — but there should never have been anything to defend. That alleged email should never have been sent. If that email was actually sent, then the statement that followed was, quite frankly, far too little, and way too late.

Over the course of the few hours when this was developing, I had one thing to be proud of: every single one of my friends in the theater community posted about it. They shared the emails and phone numbers of people involved in the decision making and begged their friends to contact them and defend the Rockettes, and then share the information with their other friends. There are a lot of moments I have been ashamed of America this year, but over the last few weeks, and particularly today, I have been fiercely, fiercely proud of them.

The Rockettes and everyone who came to their aid proved something today. We will never be quiet. We will never sit down. I can't say what's going to happen to the rest of the nation over the next four years, and I can't say who will step up and who will passively observe — but the theater community will fight, tooth and nail, for each other and for everyone threatened by this administration. Our safe space might not be safe right now, but it is something more than that: it is ﻿powerful﻿. Their eyes are all-seeing, their hearts are unafraid; they have been at the front lines of this battle for longer than I have been alive. Trump and his administration may take a lot of things from us in the next few years, but that power, that compassion, and that unstoppability will always be ours.