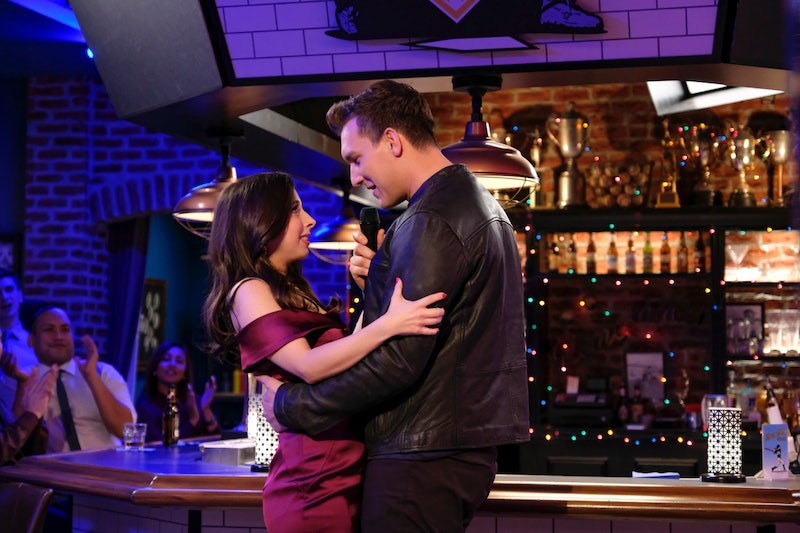 Spoilers ahead for Crazy Ex-Girlfriend Season 4, Episode 11. Although Nathaniel (Scott Michael Foster) is nice now, as he keeps telling everyone, he's still learning about what that means. Part of that includes figuring out how to let Rebecca go if she's happier without him — which, thanks to a series of rom-com parodies in Crazy Ex's Jan. 25 episode, he seems to finally grasp.

After Nathaniel learns that Rebecca loves rom-coms, he sets out to educate himself, finding himself thrown into a weird alternate reality where he's a nerdy, lovestruck doofus. Everyone around him plays slightly altered versions of themselves, too: Josh is the fun guy who dances really well, Paula's only goal in life is reminding everyone about the big work presentation, and although Rebecca and Greg are still dating, she's flawlessly put-together and loves saying "babe," while Greg is a grade-A jerk. But by flattening everyone out into one-dimensional tropes — as, let's be honest, rom-coms are wont to do — Nathaniel learns a valuable lesson about saying goodbye.

Alongside the unplaceable location (is it L.A.? New York? Paris?! Japan?), here are some of the tropes that finally help him to see the light.

Sweet, nerdy George (Danny Jolles) becomes transformed into an overly confident sidekick with a penchant for athletics. "I'm your best friend who loves sports, and I'm unreasonably cocky for such a slight man!" he exclaims happily. His only real role is to be a sounding board for Nathaniel's romantic woes and to say things like "hot diggity basketball," but he seems pretty harmless.

The Quirky Girl With The Dead Mom

Maya (Esther Povitsky) has two personality traits: she's quirky, and she has a dead mom. What's more, her glasses aren't even prescription — she wears them to honor Velma from Scooby-Doo. Maya's in love with a girl named Joanne, who ghosted her and is now dating someone else.

In his dreamscape, Nathaniel discovers that he's wearing a Tommy Bahama shirt and glasses. "Oh, I look awful!" he exclaims gleefully. He wants to win Rebecca back from Greg...but how?! He's just a dork in pleated khakis!

That Greg wears those linen blazers with the sleeves rolled up, à la James Spader in Pretty in Pink, is genius. Later in the episode, he's shown wearing a blazer and not one, but two sweaters draped over his shoulders.

The pretend relationship is a tried and true classic from movies like To All the Boys I've Loved Before, She's All That, 10 Things I Hate About You, and The Proposal. Here, Nathaniel and Maya team up so they can make Rebecca and Joanne jealous. And as we all know, they always fall in love with the person they're pretending to date.

This episode is obviously referencing The Devil Wears Prada, as is evidenced with the elevator opening and Burt strutting out Miranda Priestly style. He also demands that Tim (aka The Canadian) get him the sixth Girl with the Dragon Tattoo book — much like the impossible Harry Potter book Miranda tasks Andy (Anne Hathaway) with tracking down. Though Stieg Larsson is dead, Tim does manage to get his hands on The Girl with the Face Full of Fire, which is about adult cystic acne.

It's unclear what exactly this work presentation is about, even after Maya gives it. But that's besides the point — the important part is that Maya crushes the delivery, using buzzwords like "zoning," "tree frogs," "compliance," and "real estate." While this isn't indicative of one rom-com in particular, it's a staple of the genre — that our protagonists have vague jobs with vague projects, but the details are never really filled in.

There are so many great makeover scenes, like in She's All That, The Princess Diaries, and Miss Congeniality, and this is no exception. Nathaniel and Maya decide to give themselves a new look to entice their love interests, but obviously they just end up ogling each other. "I don't know what happened in there," Nathaniel says. "I don't remember taking a shower, and my contacts were definitely not in that little room, but they're in my eyes now!"

This brings to mind that first scene in High School Musical, where Troy and Gabriella meet onstage on New Year's Eve. Whereas they start really awkwardly, they slowly grow relaxed throughout the performance. Some of their karaoke lyrics cheekily include, "In ten years, you realize this scene doesn't hold up / but you'll still sing this song at karaoke." Fireworks are also set off out the window, because in rom-coms, you can't have a romantic moment without fireworks!

In the end, Nathaniel declares his love for Maya, but she magically turns into Rebecca and tells him that she's happy, that he should let her go. It's not the ending Nathaniel was expecting, but he gets the message, and it's nice to see how far he's come. In this case, it's good he didn't get the girl, because he and Rebecca are too similar to be truly compatible. And now that he's said goodbye to this pipe dream, he can find someone that's right for him.