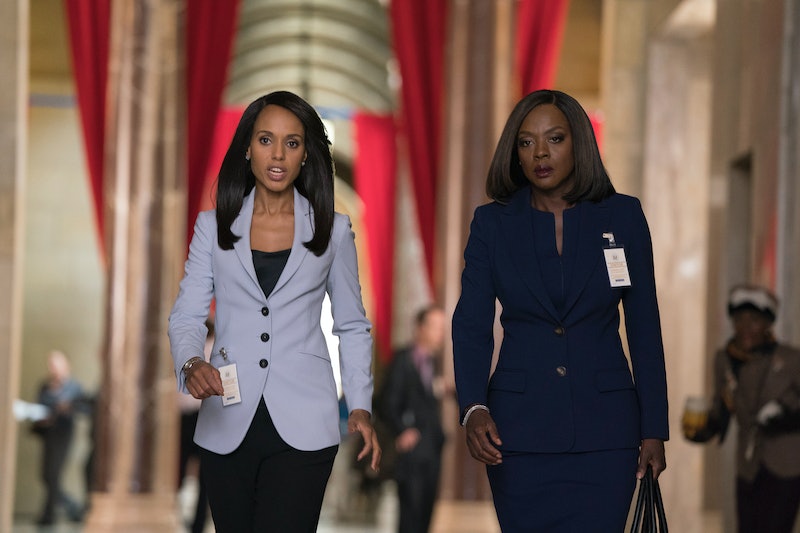 When two powerhouse women come together, big things can happen. This was most definitely the case with ABC's highly-anticipated Scandal and How To Get Away With Murder crossover event. Olivia Pope (Kerry Washington) and Annalise Keating (Viola Davis) meet for the first time when Annalise enlists the help of the "fixer" to get her class-action lawsuit heard by the United States Supreme Court. And their teaming up for justice allowed the shows to shed light on the struggle that even these two indomitable leaders deal with: the struggle of being perceived as "strong black women" all the time. Spoilers ahead.

Olivia's been laying low ever since getting fired from the White House and being all but banished from her former friends at Quinn Perkins and Associates. She takes up teaching at a local university where Annalise travels to hear her lecture and seeks her help getting her suit in the hands of a higher court.

At first Olivia outright refuses to help, having Googled Annalise and learned of her many indiscretions with the Keating crew. But after thinking it over she agrees to do whatever she can to get things off the ground. It's at this moment that viewers begin to see an Olivia reminiscent of the one that swept us off our feet in Season 1: a fixer.

While grateful for her help, Annalise can't handle Olivia's siddity attitude and tells her to drop her "I'm better than you" act. Initially they both believe that they couldn't be less alike if they tried, but alas, they're dealing with a lot of similar issues.

Both women are used to being the strong friend; the fixer; the one others turn to for help; the person with all the answers. And now, both have finally met their match, and that's not an easy pill for either to swallow. But although Annalise and Olivia butt heads, the crossover doesn't seek to pit the women against each other as enemies. Instead the reads they give each other over both episodes allow for both of them to let their guards down so a friendship to be formed.

At first, Olivia and Annalise are reluctant to bond simply over their black womanhood, because they actually find each other's methods distasteful. But ultimately, it's that — along with their fight for justice and reform — that aligns them with one another.

This quote still rings true in 2018, especially given how much Annalise and Olivia do for the people around them. They're constantly expected to manage the emotional needs and problems of everyone, with their own self-care taking a back seat. Doing so has only made both women cold, angry, and lonely. And they're reluctant to show weakness in front of anyone, which must be exhausting. But during their various exchanges, Annalise and Olivia finally get to really be heard and seen. They finally get to exhale.

As a black woman I know how it feels to have everyone expecting you to be "on" at all times, especially when you're the one who seems to always have it together. Any ambition makes you seem above needing comfort or support. And seeking help often results in surprise or confused looks. People look at you like you're useless if you don't know how to fix something. And when you try to take a step back, unfortunately, you're often met with no support. Consider what Fitz does as soon as Olivia's armor began to crack.

All Fitz can do was point out how the Olivia he knew didn't give up. No, "are you OK?" No, "you don't have to be the winner all the time." He says nothing that allows her to feel like it's OK to be overwhelmed. Instead, he makes her angst and frustration out to be all her fault. Fortunately, Annalise's mother Ophelia (Cicely Tyson) is nearby to give Olivia the pep talk she needs, thus allowing Olivia to give Annalise one as well.

"Sometimes I think this whole country would fall apart if [black women] weren't around," Ophelia says. I'm inclined to agree. But sometimes maybe that's what needs to happen. Fitz and others fail to realize that sometimes black women, like Olivia and Annalise, need someone else to step up and make things happen.

America has depended so much on us to hold families together, start movements, fight for justice, and be "strong" that our own mental, emotional and physical health can suffer. Despite the "can do" attitude people like Olivia and Annalise give off, they need a break too. And I for one am finally happy they got it in this crossover, if only for a few moments.

Will this Scandal and HTGAWM crossover event result in Annalise and Olivia becoming the best of friends or regularly meeting up for coffee to gab about their woes? Most definitely not. They do have work to do, lives to save, and things to fix. But hopefully, their time together lets them — and black women watching — know that it's OK to sit it out sometimes.