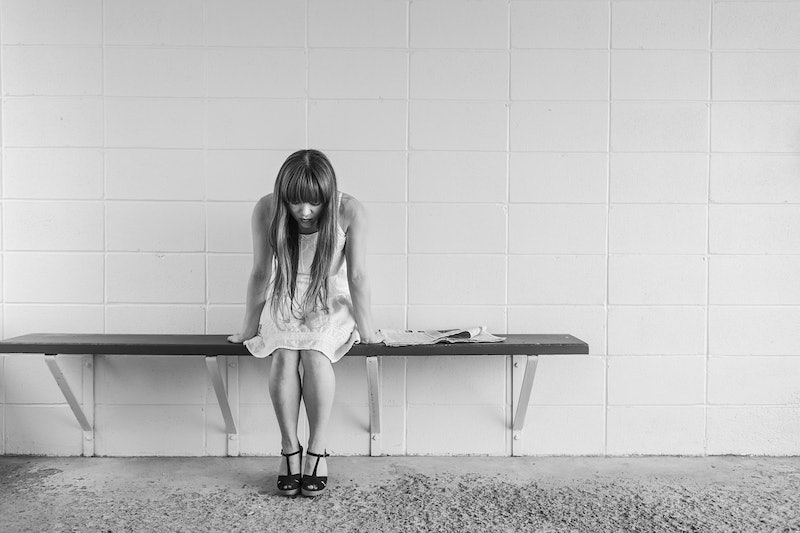 Do you worry about how much you worry? My fellow worriers, take heart — science says worrying can be good for you under certain circumstances. According to a segment on North Carolina Public Radio, Dr. Kate Sweeney, an associate professor of psychology at the University of California, Riverside, and co-author of new research on the upside of worrying, noted that it can have positive ramifications.

"The most important function that worry serves is that it acts as a motivator,” Sweeney said in an interview on North Carolina Public Radio's website. “It essentially tells us there is something we should be doing. And it gives us the motivation to do it.”

Personally, I spend a lot of time worrying about things that will most likely never happen, about things I could have done differently, and about how I should be doing more to prepare for X,Y, or Z. But, being so hard on myself also makes me push myself more than I would if I never worried at all. And, my friendlies, even people we admire worry on the regular, too, which might be part of their success.

On an episode of the podcast The Nerdist, Lauren Graham talked about worrying, why she can't relax when talking to people she admires, like Betty White and Diane Keaton, and replaying the moments over and over in her head worrying about the way she acted during the interactions. And, worrying about what she thinks of herself is why she never, ever watches herself on television until at least 10 years have passed.

Worrying Can Help You Succeed

"I feel like I should be able to hold it together and just feel some ease," Graham said about meeting her heroes, "but, I think that's the nature of just being very hard on yourself. You can only be thankful that you're a human being."

Additionally, Sweeney noted that worrying can feel so unpleasant that in contrast other poor experiences fee less awful.

"I’ve done studies with law school graduates who are waiting to find out if they passed the bar exam,” Sweeney told North Carolina Public Radio. “The ones who worry a lot while they’re waiting feel not so bad when they fail. And they feel extra great when they pass.”

While worrying can have some benefits, taking it to the extreme can result in depression, difficulty concentrating, irritability, sleep disruption, and even physical health problems. The key, according to Sweeney, is to find the sweet spot.

"For example, when I worry, I kind of go through a mental checklist. Is there anything I could be doing to make sure that bad outcomes don’t come my way, and even if they do, that I might be a little bit more prepared for them?" Sweeney noted. "If the answer to that checklist is, ‘Nope, I’ve done everything I possibly can,’ all I can really try to do is to distract myself and try to keep my worry at a manageable level.”

Worrying Motivates You To Take Action

A paper published recently in the journal Social Psychology and Personality Compass revealed that worry illuminates the importance of taking action to prevent an undesirable outcome and keeps the situation at the front of one's mind to ensure that appropriate action is taken.

"[Worrying] also triggers efforts to mitigate the consequences of bad news, motivates productive behavior that in turn reduces worry, and enhances the effectiveness of goal-directed action by prompting people to focus on obstacles that might derail best-laid plans," the paper noted.

So, basically, worry can act as a motivator to ensure that you're better prepared for things like job interviews, projects, and other important things in your life. You're also more likely to prioritize safety by doing things like wearing your seatbelt and locking your door. And, it's no accident that people who tend to be driven by worry and anxiety (hello, Lauren Graham), tend to be more productive than people who don't worry at all.

"It’s like the opposite of a vicious cycle — the more you worry, the more you plan, the less worried you actually need to be," Cari Romm wrote in New York Magazine.

Other good news for worriers includes being better prepared for emotional pitfalls. People who tend to worry more often play out every scenario in their minds and are prepared for all outcomes.

"Worry can also serve as an emotional buffer by providing a desirable contrast to subsequent affective reactions, particularly for people who are prone to high levels of worry," the paper in Social Psychology and Personality Compass explained.

People who never worry can be caught off guard when things go awry, and they could be more devastated by receiving bad news, and could take longer to bounce back. In New York Magazine, Romm suggested thinking of your worrying tendencies as defensive pessimism — keeping expectations on the lower side to help you prepare for the worst while still hoping for the best.

"The world throws a lot of crap your way; it’s never a bad idea to have some emotional armor," Romm wrote. "That’s where worry comes in: Done right, it’s a shield between real life and all the scary things you imagine."