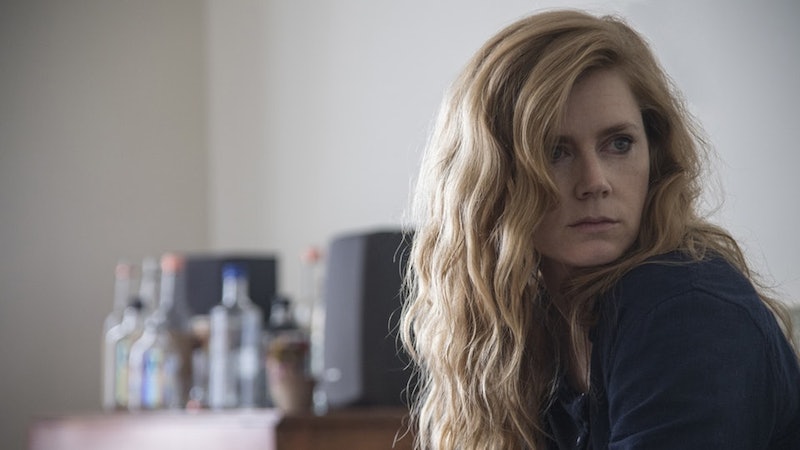 The TV adaptation of Gillian Flynn's Sharp Objects premieres on HBO on July 8, and it's sure to be all anyone in your office can talk about. If you read the book shortly after it came out in 2006, you might find yourself trying to remember what happened at the end of Sharp Objects, ahead of the HBO premiere. The failings of your memory won't be a problem here, however. I've got a quick and dirty guide to what happened at the end of Sharp Objects, so read on to refresh your memory, book nerds!

Obviously, there are many spoilers ahead. This is the end of the book we're talking about, after all. You have been warned!

Sharp Objects centers on Camille, a Chicago journalist who began self-harming at a young age, after the death of her sister Marian. She has avoided her hometown as an adult, but her boss sends her back to Wind Gap, Missouri, to cover a developing story: Two young girls have been found murdered in the span of nine months, with their teeth removed and their hair shorn.

As Camille embeds herself in Wind Gap, it slowly comes to light that her mother, Adora — who has remarried and had another daughter, Amma, since Camille left home — has Münchausen syndrome by proxy: a psychological condition that compels her to poison those close to her so that she can "nurse" them back to health. Camille realizes that Adora has poisoned not only her two living daughters, but that her disease also led her to kill Marian all those years ago. One of the detectives reveals that Adora is a prime suspect in the recent murders in Wind Gap.

In the aftermath of these revelations, Adora is arrested in connection with the deaths of all three girls, and Camille returns home to Chicago, bringing Amma with her. Everything is fine — until a few months later, when one of Amma's classmates goes missing, only to be found dead, her teeth missing and her hair cut. After confirming with Wind Gap that Adora could not possibly have been in Chicago at the time of the murder, Camille realizes that her half-sister was the one responsible for killing the two girls in their hometown. She also notices, for the first time, that Amma's dollhouse has a room in which the floors are made of teeth, the rugs of hair.

Sharp Objects is a chilling thriller that deserves this HBO adaptation, 100 percent.