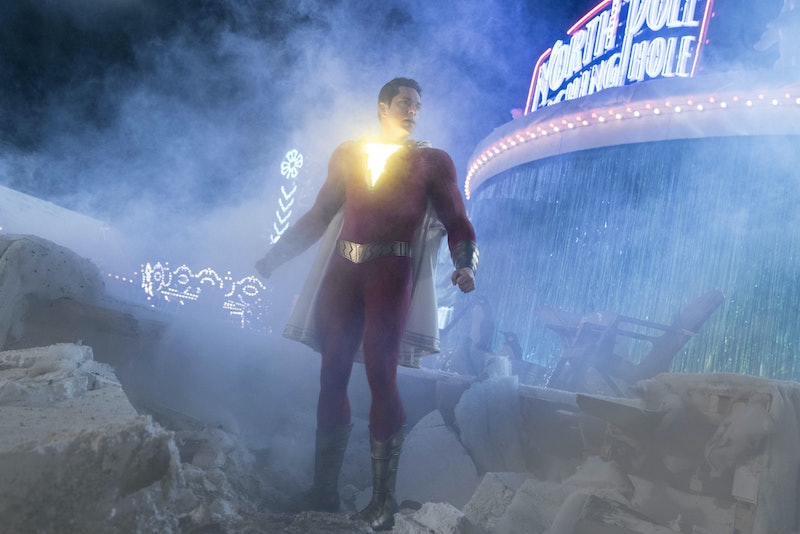 The details of the songs used in the April 5 DCEU release Shazam! have been slowly eking out from lucky viewers who have seen early screenings, but since the official Shazam! soundtrack consists of the score by composer Benjamin Wallfisch (Hidden Figures, It), a lot still remains to be seen. (Or heard.) For now, you can count on the Shazam! score album hitting streaming services the same day that the movie hits theaters, with a CD version to follow on May 10.

In January, there was a rumor circulating online that the original Superman movie theme song by John Williams would pop up in Shazam! (specifically, being hummed by a character), but the movie's director, David F. Sandberg, refuted this on Twitter, writing, "...[T]here’s no humming of any theme in the movie" and that he "[didn't] know how anyone in the universe would know the theme songs." He did confirm, however, that Wallfisch "created something really special and I can’t wait for more people to hear it."

Also in January, Wallfisch (who's behind the music for Hellboy) was recording with the Chamber Orchestra of London, and the result must be pretty epic. Paul Shirey of Joblo.com tweeted after a screening, "The #Shazam score by Benjamin Wallfisch harkens back to a John Williams Superman type hero score, which is fitting given the material. It plays well throughout, especially the ending, which is sure to bring audiences back again and again for…reasons." Wallfisch retweeted, adding "Complements [sic] literally don’t get any bigger than that!" Another fan said the score was "perfectly utilized" in the film.

As far as popular tracks are concerned, early Shazam! trailers utilized two famously recognizable rap tracks that could potentially be in the film itself: Kendrick Lamar's "Humble" and Eminem's "My Name Is," which Marshall Mathers himself shared on Twitter. But one of the most exciting reveals has been the inclusion of twenty one pilot's "Legend," the band's second track to appear in a DC film (the first being "Heathens," which played in Suicide Squad.)

Shazam! music supervisor Season Kent (who is also behind 13 Reasons Why's highly-lauded song choices) was recently named one of Variety's 8 Music Supervisors to Watch. But this isn't Kent's first time in the DC Universe: She's worked on Legends of Tomorrow, Arrow, Supergirl, The Flash, and Suicide Squad (clearly a twenty one pilots stan!).

Shazam! star Zachary Levi recently shared his own personal selections for an ideal superhero playlist, and he offered up Ariana Grande and Chaka Khan. “I love so much music," Levi says. "It would probably be something really pop-y," he told EurWeb. "I'm really into pop dance music. Even a little Ariana Grande. 'Thank You, Next.' Sometimes you just gotta do it.”

Some Ariana Grande fans theorize the pop star could have a song in Shazam!, as a Twitter user said she recently teased during a Q&A a song of hers would be featured on a soundtrack soon. (Other fans are hoping it's for After or Aladdin.)

A recent DC comic even paid tribute to the highly-anticipated movie and its music. CBR reports that in issue Action Comics #1004, a shot of Lois Lane's desk includes her iPhone in the bottom left corner, which is playing the Shazam! soundtrack. Unfortunately, the artist and title are obscured, so there are no clues there.

All we really have to go on is the comments from the lucky few who saw early screenings, but what we can glean from those thus far is how "bomb" the Shazam! soundtrack is, filled with "pretty great tracks," and that it "has taste." Another tweeted Levi that she loved the music and wanted to know his thoughts. He has yet to respond, but it's probably safe to bet he's into the soundtrack to his superhero debut — especially if there's some Ariana Grande on it after all.