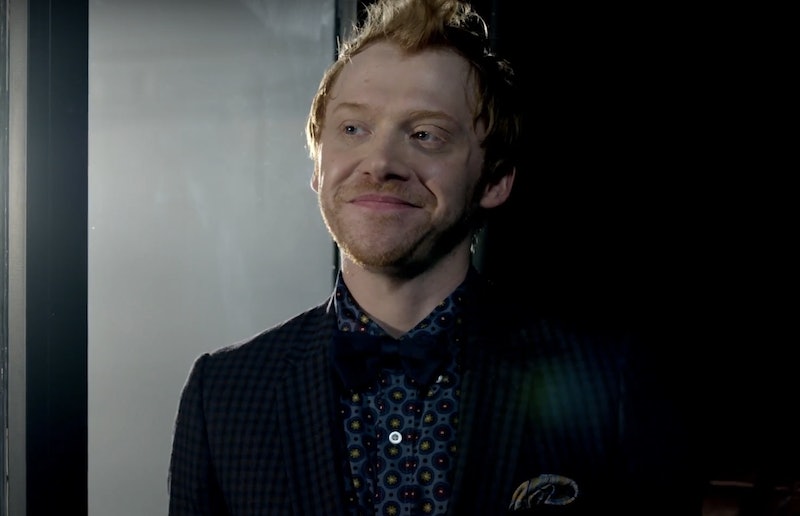 I think it's high time we all take a seat and prepare to bask in the glory that is adult Rupert Grint. Grint stars in Crackle's adaptation of Snatch, the Guy Ritchie caper film set in London. Grint is impossibly charming in the first trailer, where we get the first proper glimpse at his character, young criminal Charlie Cavendish. Charlie is described by The Independent as a "dynamic, frustratingly chaotic, and utterly posh con man," and from the looks of the trailer, it appears that Charlie will be wearing many criminal hats while he and his friends carry out a tricky heist deep in London's criminal underbelly. Sounds like a rip-roaring bit of fun, doesn't it?

Listen, as much fun as it can be to talk about Snatch and ponder just how closely the television show will adhere to the original film, I think we need to take a moment to soak up Grint's Snatch glory. While the Harry Potter star has kept a relatively low profile, in comparison to Daniel Radcliffe and Emma Watson, Snatch may prove to be Grint's return to greatness.

Charlie is front and center in the trailer, alongside heist mates (most likely best mate) Albert, Billy, and Lotti, as they plot a heist against a young and thriving crime boss (played by Ed Westwick). It looks like Grint will be carrying over his skills as comedic relief from his Ron Weasley days too. At one point in the trailer, Charlie quips about getting "'Mum' and 'Dad' tattooed across my knuckles," most likely to make him look tougher than he appears.

Overall, the Snatch trailer looks like it will hold a broad appeal and will likely bring in a ton of fandoms. If you loved and mourned the loss of Gossip Girl, Skins, and yes, the Harry Potter films, Snatch features actors from all three projects (Westwick, Luke Pasqualino, and Grint, respectively) that you can reconnect with. Additionally, there will be more British grit and charm than you can handle. So, why not give Snatch a go?

Have a look at the Snatch trailer for yourself and make sure you've got that Crackle subscription updated. You won't want to miss out on the most bae Weasley brother going rogue.