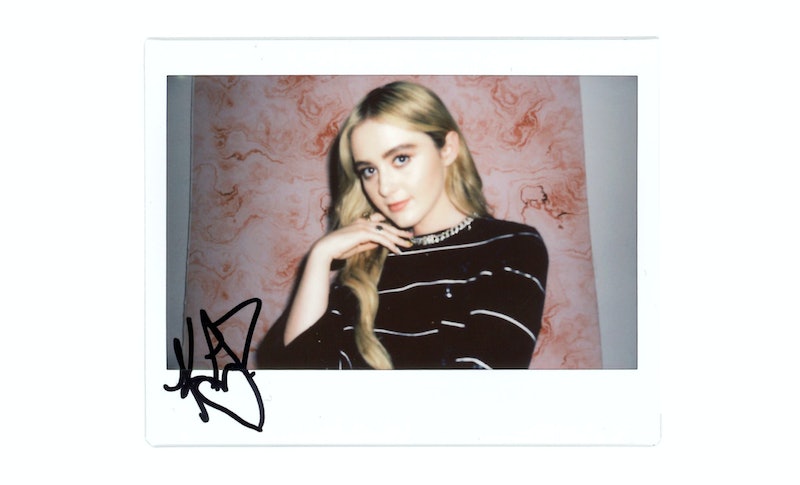 When celebrities hang out with Bustle writers, we want to give them the chance to leave their mark. Literally. So we hand them a pen, a piece of paper, a few questions, and ask them to get creative. This time, The Society star Kathryn Newton is leaving her mark in the Bustle Booth.

Standing in a forest, both hands gripped around a shotgun, Kathryn Newton’s character Allie orders an execution. The scene is near impossible to watch, but it solidifies Allie’s role in the tumultuous new world of The Society. She’s no longer just a trembling teenager playing at politics — gun in hand, her peers obediently standing behind her, Allie becomes a makeshift queen.

Allie’s consolidation of power turns her into a lightning rod for threats, intimidation, and betrayal — much like real a queen. So it makes sense that to prepare for the role, Newton researched historical figures like Catherine the Great and Mary Queen of Scots.

“She has to understand power, and I didn't know anything about that, so I had to read a lot,” Newton says. Allie’s power comes with massive responsibility; when the adults in her New England town mysteriously vanish, Allie assumes a leadership role governing the remaining teenagers as they rebuild society. But what sets Allie apart from a typical ruler is her initial reluctance to take on the role and the eventual changes she goes through once she gets comfortable in it. It was this complexity and defiance of teenage stereotypes that drew Newton to the role.

“In Allie's case, I was very forward in my ideas of her not being interested in boys,” Newton says. Yes, she's in love with her friend Will, but as Allie assumes more and more responsibility, she's willing to let him be less of a priority. “I feel like there's not a lot of girls portrayed that way," she adds.

Although Newton says these multidimensional female roles are hard to find, you would never know it from the impressive depth of the 22-year-old's career. She most recently starred in Detective Pikachu, and plays Reese Witherspoon’s rebellious daughter in Big Little Lies — a show that, to Newton’s surprise, has sparked plenty of political discussion. “No one ever thought [Big Little Lies] was going to be so political about women,” Newton says. “We were just making art.”

The Society has inspired similar debate, tackling everything from gun control to the death penalty. Newton certainly felt the weight of the emotional script, and remembers how seriously the cast took their performances. She knew the story was going to take viewers to dark places, with some of the darkest moments initiated by her own character. “Allie in particular is a girl who gets really ugly,” Newton says. “She has to do some ugly things to be good.”

Regardless of how twisted Allie’s world gets, Newton feels honored to get to play a layered, powerful female character. “There's not a lot of young girls who get to play a role like Allie,” Newton says. “I've never cared so much about a character.”

Check out Newton's answers to our Bustle Booth questionnaire below.