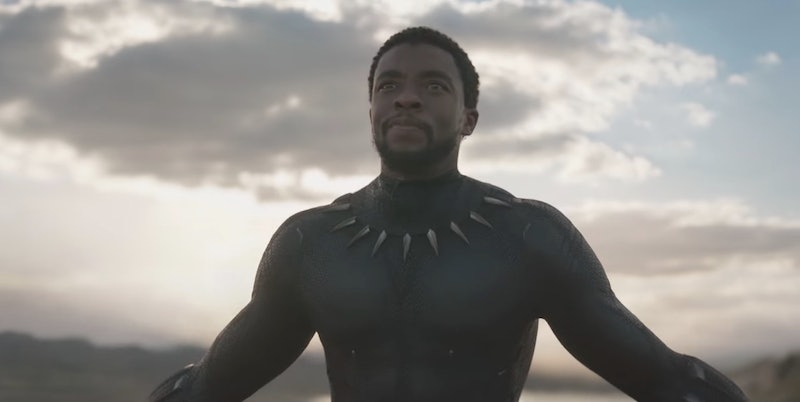 When the first teaser trailer for the much-anticipated Black Panther movie was released, the world collectively freaked out — and for good reason. The clip is short but epic, and features music that had fans asking the following question: What's the song in the new Black Panther teaser? Well, luckily I've done the research and I'm here to share the details with all of you. The track is "Legend Has It" by the hip-hop group Run the Jewels, and it's probably going to be your favorite song of the summer.

Run the Jewels was formed in 2003 by rap artists and producers El-P (birth name: Jaime Meline) and Killer Mike (Michael Render), according to AllMusic. "Legend Has It" is a single from their latest album, Run the Jewels 3, which was released in December 2016.

The only lyric you hear in the trailer is "Step into the spotlight," but some of the full lyrics prove this really was a fitting song to use to promote Black Panther. Lyrics like, "There is no training or taming of me, look like a man, but I'm animal raw," or "You think I'm lion, you right, see my teeth, don't be a bore when I'm roaring vamoose." There's even a cat in the official "Legend Has It" music video (at the 1:16 mark). Heads up, the lyrics are definitely NSFW.

Oh, and in case you missed it, be sure to check out the new Black Panther teaser below. The film stars Chadwick Boseman as King T'Challa (also known as Black Panther) alongside the likes of Michael B. Jordan, Lupita Nyong’o, Daniel Kaluuya, Angela Bassett, and Forest Whitaker. It was directed by Ryan Coogler, who co-wrote the screenplay along side Joe Robert Cole.

Although we've already been given this preview, sadly, Black Panther doesn't hit theaters until Feb. 16, 2018. I know, it seems like forever and a day away, but for now, you've got the teaser to replay and a song that'll be stuck in your head all summer long.