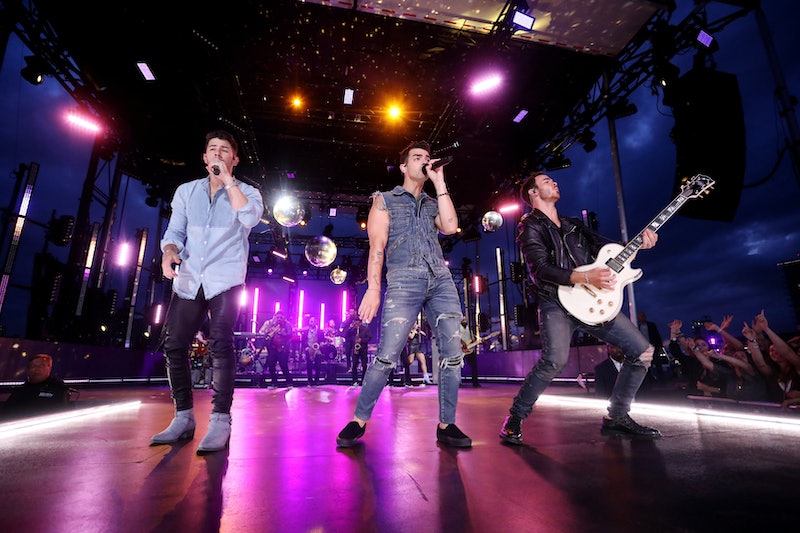 The 2019 VMAs were filled with references to the Garden State, but it doesn't get more Jersey than The Sopranos cast giving an award to the Jonas Brothers. During Monday night's show, Sopranos stars Drea De Matteo, Jamie-Lynn Sigler, and Vincent Pastore reunited to present the award for Best Pop Video together, and it ended up being almost too perfect of a VMAs moment. Who else was the Sopranos cast supposed to give this award to other than their fellow New Jersians the Jonas Brothers? Pastore joked that he'd give Sigler $20 if she said the Jonas Brothers had won — and when they were announced as the winners, she made him reach for his wallet and everything.

But while Joe, Nick, and Kevin Jonas admitted how fitting the introduction was in their acceptance speech, perhaps no one was more excited about this particular Jersey tribute than Joe's wife, Sophie Turner. Want proof? Please refer to the tweet below.

Listen, HBO alums gotta stick together; as a former Game of Thrones star (RIP), of course Turner is going to stan the Sopranos cast. The Stark family was standing on the shoulders of the Soprano family the whole time, and we all know it.

Turner is also in a particularly Italian mood at the moment — on Monday morning, she was going off in praise of pasta on her Instagram Story. When in Rome and/or Newark...

Earlier in the show, the Jonas Brothers sang in nearby Asbury Park, a famous spot on the Jersey shore, for their (pre-taped) performance. The group has not performed together at the VMAs in 11 years, so it was already quite a big moment for them. And winning on top of that? The three Jersey boys really were having the best VMAs ever.

Add the Sopranos reunion, and it was a pretty big deal for Jersey. Fans everywhere agreed. "The cast of the Sopranos presenting an award to the Jonas Brothers while on stage @PruCenter in Newark might be the most New Jersey thing I’ve ever witnessed," tweeted one fan.

Not only was this a very Jersey moment, it was also a major throwback.

The Sopranos stars' onstage banter was sort of in character, sort of not. They used their real names, but also low-key threatened the crowd. "You're making Jersey feel like Jersey," de Matteo said before promising to steal a Moon Person for her onetime co-star.

From host Sebastian Maniscalco's jokes about Bruce Springsteen being the only "influencer" from New Jersey to the closing performance by the state's finest rappers, the 2019 VMAs wanted you to know exactly where they were. It's easy to make fun of New Jersey, aka New York City's mullet, but they deserved this night. There's a lot of music history there. Heck, MTV owes a lot to the Jersey Shore. Putting the Sopranos on stage with the Jonas Brothers was perfect Jersey energy, and you didn't have to be Sophie Turner to see it.

More like this
Taylor Lautner Thought Taylor Swift's 2009 VMAs Interruption Was A "Skit"
By Alyssa Lapid
The Jonas Brothers' New Album Has A Very Meta Name
By Alyssa Lapid
Grammys Host Trevor Noah Made Adele's Dream Of Meeting The Rock Come True
By Brad Witter
Linda Ronstadt’s “Long Long Time” Plays A Pivotal Role In The Last Of Us
By Brad Witter
Get Even More From Bustle — Sign Up For The Newsletter
From hair trends to relationship advice, our daily newsletter has everything you need to sound like a person who’s on TikTok, even if you aren’t.