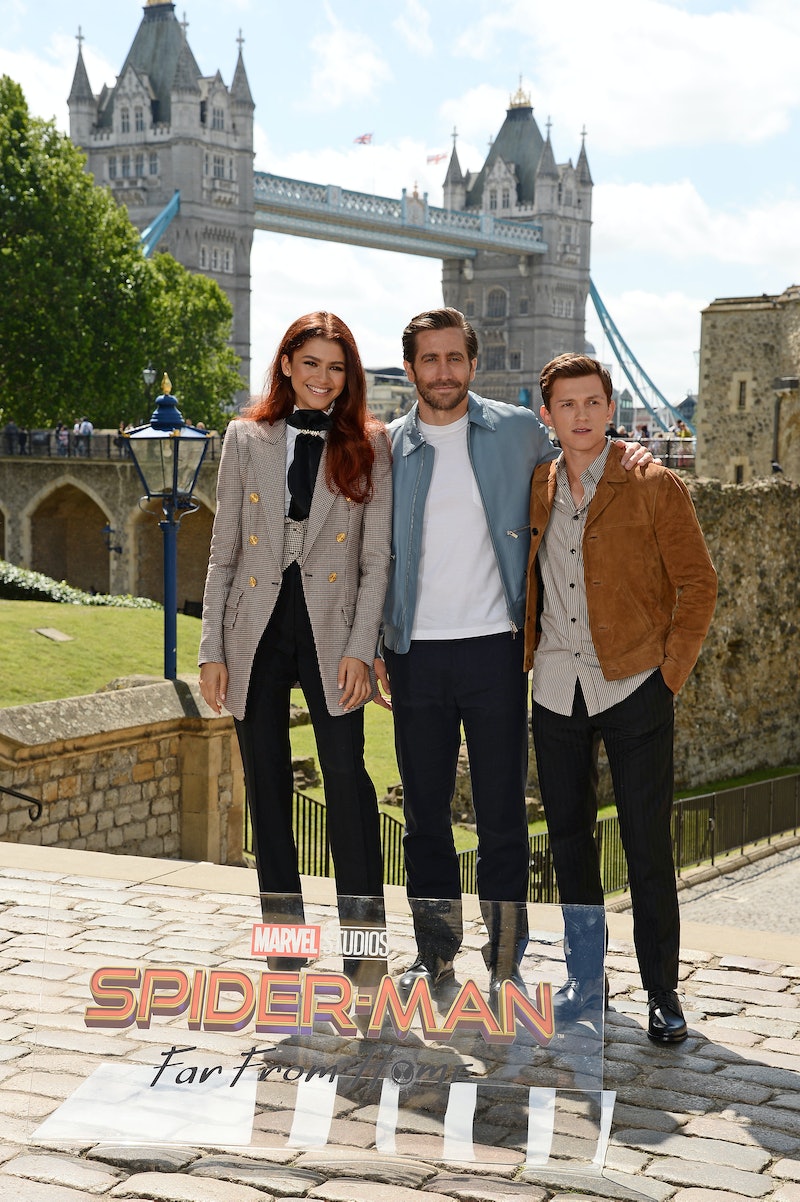 They may star in superhero movies on the big screen, but actors from the upcoming Spider-Man: Far From Home recently showcased their real-life super powers. Spider-Man co-stars visited a children's hospital ahead of their summer sequel's July 2 release. Tom Holland (Peter Parker), Zendaya (Michelle), and Jake Gyllenhaal (Mysterio) all stopped by Children's Hospital Los Angeles, in a trip documented in a video from the hospital.

Gyllenhaal and Holland donned their onscreen superhero costumes for the hospital visit, clearly leaning into their onscreen personas for the young fans. Watching the video, fans may also notice Holland, who is a Brit, uses his American accent for his conversations with the kids. It was a sweet touch that prevented the patients from being confused about Peter Parker's new accent. An official description for the video of the visit, released by the Children's Hospital Los Angeles described it this way: "[They] visited Children's Hospital Los Angeles to surprise patients at an advance screening of the new movie. Though the film doesn't open until July 2, these kids got a first look, and then a surprise Q&A with the stars, who showed up in full costume. Tom, Jake and Zendaya brought high fives, autographs, back flips, selfies and infinite smiles to the kids."

Yes, you read that correctly. Holland extended his commitment to the visit by doing an actual back flip for eager patients. And it was seriously impressive. Smiling kids got to interact with cast members from the upcoming summer movie after a special screening at the hospital.

The patients were clearly excited for the megastar meeting. In the video, one patient is seen wearing a "Team Awesome" t-shirt, which included images of Iron Man, Captain America, and Spider-Man. No worries, the little fan clarified that Spidey was his favorite Avenger.

In one super sweet exchange, a patient tells Holland, "I love you, and that you shoot webs." The actor kindly responded, "You like it when I shoot the webs? Well, I actually used all the webs on my way over here." Even though Holland couldn't pull out Spider-Man's actual magical powers, doesn't mean he wasn't able to bring major joy to Marvel loyalists at the hospital.

These aren't the first Marvel superheroes to visit young patients in costume. Chris Evans (Captain America) and Chris Pratt (Star Lord) used their opposing Super Bowl teams in 2015 to form a charitable bet. In February, Evans and Pratt visited Evans' charity Christopher's Haven with Pratt dressed as his Guardians of the Galaxy character. In March, Evans visited Seattle Children's Hospital dressed as Captain America. In 2016, Robert Downey Jr. visited a London's Children Hospital and was greeted by mini-Iron Man outfitted patients while there. Can we just say there is no day that hasn't been brightened from seeing Marvel actors chatting with patients as their superhero selves.

It's nearly impossible not to smile when thinking of your Avengers faves giving back by embracing their onscreen counterparts. As the next phase of the MCU begins, who knows what actors...and costumes will show up in future visits.

More like this
Rupert Grint Just Shared A *Major* Update About Ron Weasley’s Future
By El Hunt
Anne Hathaway Shared A "Thrilling" 'Princess Diaries 3' Update
By Darshita Goyal
The 'Scream 6' Trailer Shows Off Hayden Panettiere's Return & Ghostface In NYC
By Jack Irvin and Jake Viswanath
Jennifer Coolidge Hunted For Jewels & Lashes In J.Lo’s Hotel Room
By Jake Viswanath
Get Even More From Bustle — Sign Up For The Newsletter
From hair trends to relationship advice, our daily newsletter has everything you need to sound like a person who’s on TikTok, even if you aren’t.