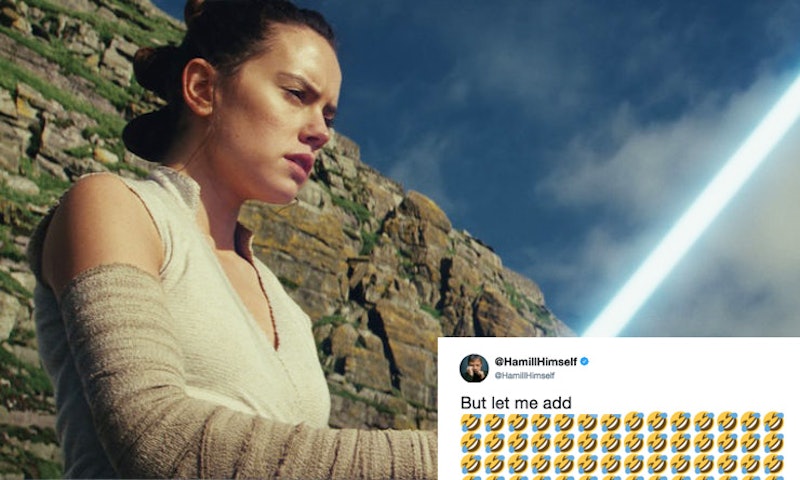 After a fan created an edit of the most recent Star Wars movie that dramatically diminished women character's roles, the cast and director of the film were not having it. You see, the sexist version of The Last Jedi not only became a joke to fans. Oh, no. The Star Wars cast mocked the sexist Last Jedi edit mercilessly on social media as well. The bootleg, helpfully titled "The Last Jedi: De-Feminized Fanedit (aka The Chauvinist Cut)," in case you had any doubts about how little it cares for women, appeared on Pirate Bay on Sunday and has been the subject of much ridicule ever since. So how bad is it? Spoilers for Star Wars: The Last Jedi ahead.

According to the presumably male creator's own description, the edit is "basically The Last Jedi minus Girlz Powah and other silly stuff." If you think that sounds impossible considering Rey (Daisy Ridley) is the main hero of the film and the movie is rife with bad-ass women around her, know that this version is only 46-minutes long (as opposed to 2 hours and 35 minutes) and has some "plotholes [sic] and continuity errors." A few of the edits made from the film include the decision to remove "superpowered Rey" and change General Leia (Carrie Fisher) completely. "Leia never scolds, questions nor demotes Poe," the creator writes. (Which begs the question of whether or not this guy ever seen a Star Wars film before, because Leia always speaks her mind and tells men what's what.)

But it gets worse. Referring to Rose Tico (Kelly Marie Tran) as only "Asian chick," the creator of the edit writes that she "speaks less, doesn't bully Finn, Finn doesn't try to escape, she is never formally introduced. She is just there and occasionally smiles at Finn or screams 'Finn!'" He also removed her sister, Paige Tico (Veronica Ngo) from the movie entirely. He explained that it "serves her right for all the heinous stuff she did." As to be expected at this point, he completely removes Vice Admiral Holdo (Laura Dern). Kylo Ren also kills Leia, because why not?

The news spread fast about this awful edit, and the film's director Rian Johnson reacted swiftly by quoting another social media user's tweet that shared Pedestrian's article about the cut. Johnson did not hold back on how it made him feel, sending out a mocking laugh with the article.

Johnson's tweet set off a chain reaction, with Mark Hamill, aka Luke Skywalker, also sending out his reaction.

And then John Boyega, who plays Finn, joined in on the mockery.

Star Wars fans shared their thoughts on "The Chauvinist Cut" on social media, too, and they did not hold back punches.

Some people argued that Men's Rights Activists could not see the irony in their choice to back this version of the movie.

Some had questions and suggestions for the cut:

Others felt inspired to make their own response cuts:

As for whether the creator of the edit will get his wish and see less women in Star Wars moving forward, that seems unlikely. The last three Star Wars films The Force Awakens (2015), Rogue One (2016), and The Last Jedi all boasted women leads and pulled in impressive numbers at the box office as well as strong reviews from critics. And, according to Box Office Mojo, the three films with the highest domestic gross earning in the US in 2017 (The Last Jedi, Beauty and the Beast, and Wonder Woman) were all led by women.

In other words, fans who are hoping that the Star Wars movies will return to the days of only have one main female character are in for a rude awakening — and their fictional heroes and other Star Wars fans are laughing at them.

Correction: A previous version of this post misidentified the actor who played Vice Admiral Holdo.