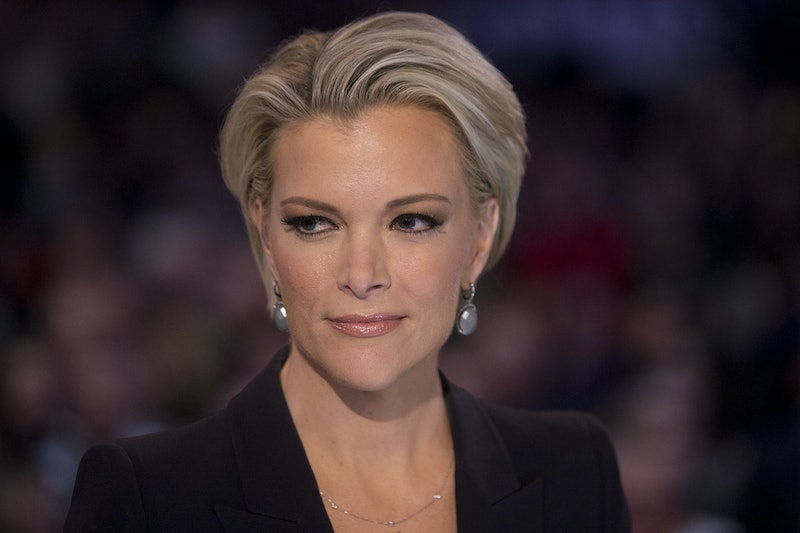 In Bombshell, Charlize Theron portrays Megyn Kelly, former Fox News host and ardent rejecter of the feminist label. The film's main focus is the allegations of sexual harassment Gretchen Carlson and numerous other women at Fox News raised against the channel's founder, Roger Ailes. But buried in the film is a bonkers conspiracy mini-story that deserves a special highlight of its own. I present: the story behind Megyn Kelly's coffee poisoning in Bombshell.

The entire bit centers around the August 6, 2016 Republican primary debate. Kelly, along with two others, was set to moderate the main debate, which included then-candidate Donald Trump, along with other Republican front runners including Jeb Bush, Rand Paul, and Scott Walker (not the good one). Kelly's pointed (and obvious) questions about Trump's fitness for the presidency irked the candidate and set off a weeks-long "feud" culminating in Trump calling for a boycott of Fox News entirely. During this feud, a number of odd facts and insinuations popped up, building into what could be considered a proper conspiracy for the suspicious-minded. The capper came with a New York Times' review of Kelly's book revealing she'd been so ill before said debate, she almost didn't make it. We'll break down the possible reasons for that here.

July 31, 2015: A week before the debate, Megan ran a segment about Trump on her Fox News show The Kelly File. According to her memoir, Trump was reportedly so upset by the segment he refused to do a scheduled interview until she personally called him. She also wrote he allegedly threatened her with social media: "I almost unleashed my beautiful Twitter account against you, and I still may", if you can call that a threat.

August 5, 2015: On the eve of the debate, after learning Kelly would be moderating and opening with "a very pointed question directed at him", Trump allegedly called Fox executives in a panic, according to Kelly's book.

How could Trump have known about that? According to a New Yorker piece, sources close to Trump and Fox News insiders allege Trump was tipped off to the debate questions by Fox News insiders, possibly at the behest of Ailes himself.

August 6, 2015: The morning of the first GOP debate. The NYT book review of Kelly's memoir says she woke feeling fine. "Then an overzealous, suspiciously enthusiastic driver picked her up to take her to the convention center. He insisted on getting her coffee, though she’d repeatedly declined his offer." She drank the coffee once it was in hand, and within 15 minutes Kelly became violently ill, vomiting so profusely she wasn't sure she'd be able to moderate that night. Kelly obviously ended up moderating, but apparently kept a trash pail beneath her desk the entire time as precaution.

At the debate, Kelly pushed Trump on his crude and demeaning comments on women, whether baiting his base on immigration was "playing to people's fantasies", a tactic he'd suggested in his own book, and other straight-shooting questions Trump took umbrage at.

August 9, 2015: Kelly told Media Buzz she thought the illness was food poisoning, not deliberate poisoning. After a headache and nausea, Kelly had to go to her hotel and lie down for a bit. "Then the beautiful, wonderful savior of my life, Dr. David Silverman of New York, called me in anti-nausea medicine. My assistant was feeding me full of medicine and I was sweating with wash cloth on me at 3 in the afternoon. I almost didn't make that debate."

August 10, 2015: On her show, Kelly noted Trump's tantrum, and calmly insisted she'll "continue doing my job without fear or favor."

The full details of the Kelly/Trump feud, in which the then-presidential candidate behaved like a middle-school girl disinviting people from their birthday party, continued for months, with Trump boycotting the second debate and calling Kelly "crazy" and "sick" after the third, according to what Kelly told ABC News. Eventually Kelly had a one-on-one interview with Trump in April 2016, effectively ending the one-sided spat.

Kelly is now healthy and lived to see not only Ailes leave Fox in disgrace, but also to watch the publicly vindictive candidate who went after her become President. True conspiracy theorists would say she's hedging her bets, putting the information out there but overtly saying it was mere illness. Whether or not someone was spiteful enough to actually attempt to make Kelly ill remains a mystery.