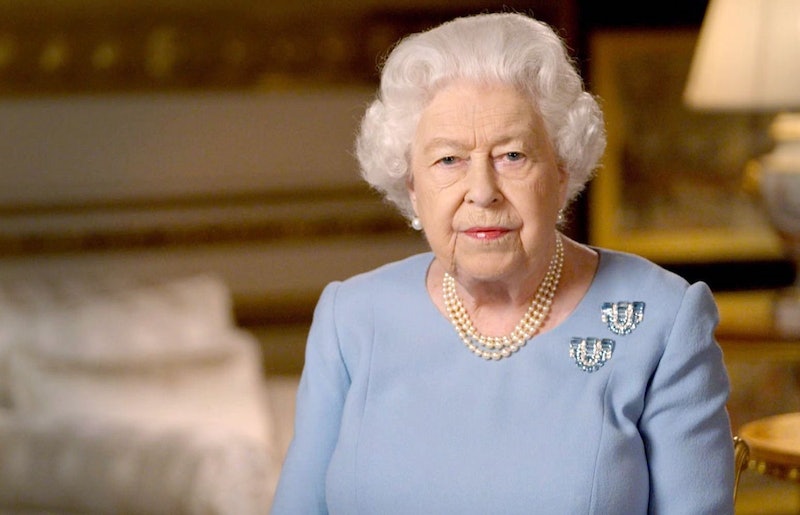 No one wears a brooch quite like The Queen. Case in point: her latest televised address, to mark the 75th anniversary of VE Day, AKA victory in Europe. Speaking to the nation from Windsor, the Queen led tributes to the wartime generation, reflecting on the poignancy of such a unique day of remembrance taking place during the coronavirus lockdown. Royal watchers will not have missed her brooch, which itself was a touching personal tribute and a fitting reflection of the current mood, too.

As with the brooch she wore for her coronavirus address last month, this sartorial choice was both symbolic and deliberate. Pinned far to the left of her cornflower blue dress, just below her shoulder, the Queen wore a pair of Boucheron aquamarine and white-diamond brooches. The Art Deco pieces were an 18th-birthday gift from her father, George VI, whom she paid homage to in her speech and via the royal family’s social media channels.

"I speak to you today at the same hour as my father did, exactly 75 years ago," the Queen said in her address. "His message then was a salute to the men and women at home and abroad who had sacrificed so much in pursuit of what he rightly called a 'great deliverance.'" A portrait of her father featured to her left, adding to the tribute.

"As I now reflect on my father’s words and the joyous celebrations, which some of us experienced first-hand, I am thankful for the strength and courage that the United Kingdom, the Commonwealth and all our allies displayed,” she added.

The Boucheron brooches are said to be among the Queen's favourite and have been spotted on her, including the 2014 Queen's Anniversary Prizes for Higher and Further Education, and in public exhibitions, like the 2006 Summer Opening exhibition.

Beyond the personal significance of the accessories, there is also the meaning of their design. “Art Deco celebrated the triumph of technology and the sleek, liberating forms of the machine age, its emphasis on structure responded to a widespread desire for order in the wake of chaos,” as per British auction house Christie’s. Very fitting for these unprecedented times.